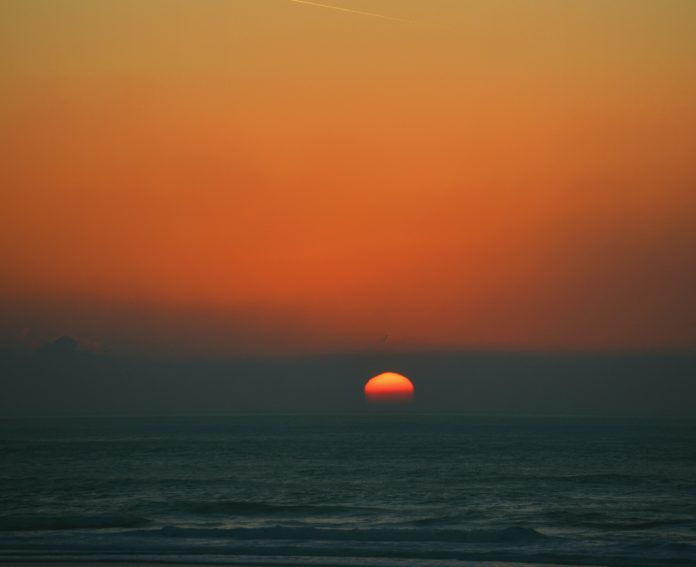 Amma’s lilies were in full bloom. You could see a rainbow in the puddles on the terrace, and my otherwise unruly, husk-like hair was suddenly smooth and shiny and perfect overnight. It felt like the day was asking me to be happy, to laugh and skip, and sing. I wore my favourite yellow shorts and the white shirt with flowers on it and sped off on my cycle, and didn’t stop until I reached the beach.

We had moved to this coastal town a year ago, when Pappa started a project surveying the coral reefs here. He was working with the Department of Oceanic Studies and Research. They also paid for a cosy little cottage for us to stay. I was eager to experience this life that Amma spoke so highly about but was also reluctant to leave my friends in the city. She had often told us about wanting to move away from the bustle of the city, and settle in a small town. Moreover, living in a five-storey apartment, she was beginning to miss things that cannot be missed, like the chipped paint of her childhood tharavadu home, the algae in their lake, the smell of mothballs on her mother’s woollens and the crunch of metal stone under her feet.

She also worried that I was missing out on the fun that she used to have growing up in a small town herself. And so, while Pappa was away at the University, Amma taught me to eat mangoes by squeezing them, make pineapple jam, climb trees, and even how to ride a cycle. She held my cycle and ran behind me, her cotton saree pinned up, touching her ankles, until I learnt to balance on my own. Amma used to be an accountant for a large firm, but she had given up that to stay with me after I was born. She said that loving was hard work. It meant having to give up some things, and sometimes, it hurt. I wanted to believe her because I loved her in general, but it was hard to do so when she grounded me, or when she wouldn’t buy me the thousand-piece puzzle set, but somehow the idea of getting hurt made me sulk.

I laid down on the warm sand, feeling the breeze slowly tousling the bangs on my forehead. As the sun rays bumped off my cheeks and laid beside me, tickling my already warm skin, I watched the waves calmly lash against the rocks. I liked to believe that the ocean somehow always mirrored my own emotions. That way, I could turn to it when I couldn’t understand what I was feeling. It always brought with it, a sense of power, a sense of knowing.

The front door was ajar when I got back home. Muffled voices were coming from the living room. I guessed Amma and Pappa had woken up. I had left a note, just in case they woke up and couldn’t find me.

I walked towards the room. The sound grew louder now, angrier even. I peeped in. Pappa was sitting carelessly on the sofa, his potbelly resting on his thighs. Amma was shouting. But the words didn’t make any sense. Although a woman of small stature, when angry, Amma always seemed taller.

The TV was on. A news anchor, a woman with a sharp jaw and cropped hair, clad in an embroidered saree, was saying something; however, the volume was muted. My attention came back to Amma and Pappa when the remote shattered on the floor. Pappa was now standing. He had lost that unruffled look he always had, eyebrows now furrowed and lips pursed. Then, his giant palm in a swift movement met Amma’s cheek.

A squeal escaped me. I ran to my room.

I clenched the doorknob and tried to take long, deep breaths. But I had forgotten how to do it. All I could feel was my mouth going dry, my eyes going dark, and my head pounding. My legs felt weak; I fell on the cold tile floor. I imagined the waves had become big and monstrous. It must’ve come down and eaten the sandcastles left by people earlier in the day. It must’ve thrashed at the rocks.

When I opened my eyes again, I saw the glow in the dark stars on my ceiling. It wasn’t glowing, just fluorescent green. Amma had brought it for me when I was smaller to stop my wailing in the supermarket. Pappa had helped me stick them on the ceiling. I started counting it. Big stars, fifty. Small stars, hundred.

I heard a door bang shut followed shortly after, by a car starting. Amma came to my room and saw me sprawled on the floor. For a brief second, her eyes met mine. Her ocean green iris, now only a blotch against the flaming red sclera. My biology teacher had just started teaching us the ‘structure of the eye.’ I liked that teacher, so I had read the names over and over until I knew it by heart. “Sclera, cornea, iris, pupil, lens, macula, optic disk, retina, optic nerve”. The words bounced around my mouth long after Amma had retreated to her room.

Later, when I walked up to Amma’s room and shoved the door open a little bit, I found her crying. Tears rolled down in waves and washed over the pages of the Bible she held. I didn’t know anyone could cry so quietly. I hadn’t heard a single sob. I, on the other hand, was so used to crying very dramatically. Shaking, screaming, stamping my foot, punching the walls and pulling the hair of anyone who tried to console me. I liked to make it a theatrical performance.

I sat with Amma, and she wrapped me in her embrace.
“Did Pappa leave us?” I asked
“No”, she said.
“Will he come back?”
“Yes”
“Do you want him to come back?”
She didn’t answer.
“Do you love him?”
She didn’t answer again. Instead, she stroked my hair, gave me a kiss on the forehead like the one she gives when I am sick or sad. It was different from the other kisses she gave me; like when I helped her with chores, she would hug me tight and kiss me on the cheeks, and in the mornings she would ask the usual “Did you sleep well, baby?”, and touch her forehead to mine, and give a kiss on the chin.

“Everything’s going to be okay, go now, eat something.”

I grabbed the tub of ice cream and sat on the floor leaning against the fridge. Opposite me was a bunk bed in which we no longer slept. Amma had started using it as a cloth holder. She would collect the dry clothes from our clothesline on the terrace and fling it on to that bed. Then, every morning, we’d dig through it for kerchiefs, socks, ties, shawls, shirts, pants, uniforms, everything. Somedays I would dig through it even when I didn’t need anything.

Walking up to the pile, I slowly picked up each piece of clothing and folded it. In that moment of folding, of separating, of undoing that heap, my 12-year-old self tossed around a thought that I would struggle to understand even for many years after.

“Love was hard work. It hurt.”

Shades of pink and purple now coloured the sky, and I sped off on my cycle again.

As I watched the sun slowly disappear in the ocean, I wondered if the sun and the ocean loved each other. When the waves lash against the rocks, is it the sea crying theatrically because, well, love hurts? I didn’t know.

It was a wretchedly beautiful morning.

Author Profile
Angel Maria Varghese is a student of English Literature at St.Joseph’s College, Bangalore. She occasionally blogs at https://brewingcauldron.wordpress.com/