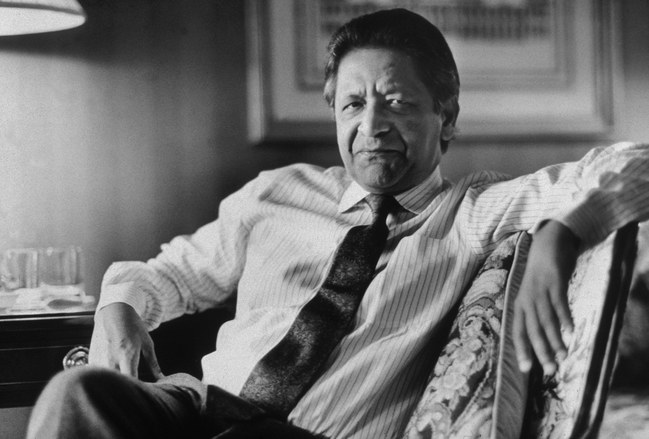 Naipaul painted his books with words, rendering them unbelievably graphic, affording astonishing clarity. His simple and everyday words acquired unheard eloquence, unseen shades and magic of a conjuror. Pieced together, they conveyed far more than their collective scope, taking us on a beautiful, eye-opening odyssey, amusing us, shocking us and, more often than not, unsettling deep-rooted beliefs. The veneers of comicality, scorn and dismissive elegance were lucent, laying bare the underlying streaks of principal melodies of his compositions: human ignorance, fanaticism, misery, decadence and crudity.

In his late sixties, already frail, when the Nobel Committee broke the news in 2001, he was far less ecstatic by saying, “Should have come earlier.”

“Why do you say so?” Nadira, his Kenya-born Pakistani wife, asked.

“Would have inspired me to write a bit more,” Naipaul said.

However hard he tried to forget, memories of his early lacklustre, painful years at the University College, Oxford, rushed back. His attempts at writing were taking him nowhere. Like Anand in A House for Mr Biswas, if escaping the gloomy Caribbean society was a cultural coup, London was as indifferent and as tyrannical to blacks and coloureds like him. His dream of becoming a writer was in shambles and paddling his own canoe in English waters seemed impossible. Insurmountable odds enraged him but the ensuing disillusionment eased him into depression. As the English clime continued to cold shoulder him, so frustrated was he that he suddenly disappeared from London, only to appear in Madrid. He was utterly dejected with the Spanish experience and, despite the nomenclatural affinity, the difference between Spain and Port of Spain was too stark. Within months, having lost all that he had, was back in London a broken man.

After returning, with the help of Patricia Hale, his future wife, he began recovering and resurrecting his dreams. The very year, 1953, he graduated from Oxford, his father, Seepersad, passed away. The very year, 1932, Naipaul was born; his father had become a staff correspondent at the Trinidad Guardian.

While working at BBC Radio, in the freelancers’ room, he wrote the first story of Miguel Street and completed the book in five weeks. Naipaul dressed irony and absurdities of life with tragic, comic caricatures and wry wit. But the publisher Andre Deutsch was hesitant to publish a book of short stories by a nameless Caribbean writer. They asked him to write a novel, which he peroduced, by taking very little time—The Mystic Masseur, his first book to be published in 1955. While The Mystic Masseur won the John Llewellyn Rhys Prize, Miguel Street went on to win the Somerset Maugham Award, Naipaul becoming the first non-European to receive it and the icing on the cake was that Maugham himself had given the nod.

After spending three years writing his magnum opus A House for Mr Biswas, Naipaul spent five months in the Caribbean writing The Middle Passage, his first travel book, in which he offended many by saying, “History is built around achievement and creation; and nothing was created in the West Indies.”

With the notes he jotted down during his voyage to Caribbean in 1956 was born The Suffrage of Elvira, a novella about sham elections in his native Trinidad. For about five years after that he had to work as an editorial assistant at the Cement & Concrete Association in London and a part-time book reviewer at the New Statesman.

At the age of thirty, in 1962, Naipaul and Patricia toured India for the first time to write An Area of Darkness. He was appalled by what he saw in the land of his ancestors, milk and honey, Ramayana and Mahabharata. He was nauseated by the Indian ways of ascribing fatality to poverty, suffering and disease. He was too certain that India was resigned to live in its past, in its dirt and in its superstitions and, with no idea of progress, modernity or future, was destined to decay in its darkest dungeons. This is how he described Indian life, “And in the streets there was the East one had expected: the children, the dirt, the disease, the undernourishment, the cries of bakshish, the hawkers, the touts, the glimpses of minarets”

He termed the bus station in Madras near the High Court as ‘one of the most popular latrines’. He observed that while walking past the University on the Marina, without shame, people raised their dhotis, pissed on the pavement, and let the dhotis fall.

While in India, Naipaul also wrote Mr Stone and the Knights Companion, his only novel set in Britain with white British characters.

By now, even if out of the clutches of anonymity of the freelancers’ circle, despite those books earning critical acclaim; he wasn’t making enough to make a living. His literary courtship displays weren’t tempting enough to excite the British high society. Patricia went back to teaching to supplement the income.

Years later, amidst money and fame, Naipaul had said, “I wanted to be a writer without knowing what I wanted to write about… I had a great faith in my talent… I felt if I wasn’t true to my talent that would be the end of me as a person… My life as a writer was always a process of learning… I don’t know if what I have said helps anybody.”

Accepting the fellowship offered by Makerere University in Uganda, he quickly completed his unfinished book The Mimic Men. It received positive reviews and one Caribbean politician had commented, “Naipaul’s description of West Indians as ‘mimic men’ is harsh but true…” The unique style that beautifully blended fiction and non-fiction was something he was to treat all of his future works with.

After the fellowship, having collected enough material while visiting Kenya, Rwanda, Tanzania and Congo, Naipaul wrote his next book In a Free State that portrayed a dismal picture of the decolonised African nations mired in chaos, violence under the leadership of greedy dictators. The book went on the win the Booker Prize in 1971. It was during this time, in Kampala, that Naipaul had met the young American, his future protégé, Paul Theroux.

Sponsored by an American publisher to write the history of Venezuela and Trinidad, The Loss of El Dorado was expected to relieve Naipaul’s financial anxieties. But he was crestfallen as, instead of being a blockbuster in the United States, it just sold less than three thousand copies.

India: A Wounded Civilization was his second book on India. He picked his diatribe back from where he left off in An Area of Darkness by stuffing the book with more and more child labour, casteism, open defecation, filth, human sacrifice and stupidity. He pooh-poohed India by saying, “No civilisation was so little equipped to cope with the outside world; no country was so easily raided and plundered, and learned so little from its disasters.”

Naipaul returned to India in the ’80s to complete the trilogy to produce India: A Million Mutinies Now. Apart from his unease with attitudes and Indian way of life, this time, he sounded a little optimistic, “Independence had come to India like a revolution. Now there were many revolutions within that revolution….All over India scores of particularities that had been frozen by foreign rule, poverty or lack of opportunity or abjectness had begun to flow again.”

He married Nadira in the mid-nineties, two months after Patricia Hale, his first wife of 40 years, passed away. And, into the bargain, Nadira made him instantly dump his Anglo-Argentine mistress of twenty five years, Margaret Murray Gooding.

Naipaul was awarded the British David Cohen Prize for Literature in 1993.

In 1998, Paul Theroux, his American protégé, had published a controversial memoir Sir Vidia’s Shadow: A Friendship Across Five Continents. The scathing portrayal of his personal life enraged Naipaul who retaliated in equal measure, severing decades-old relationship.

Much before the world woke up to the horrors of terrorism, Naipaul had cried from the rooftops about the fanaticism gripping the Islamic world from Iran to Indonesia to Pakistan by saying, “Self-pity possesses Islamic fundamentalists so absolutely that they are able to close out everything else.”

The last of his books, The Masque of Africa: Glimpses of African Belief, was published just a year before he was awarded the Nobel Prize in 2011, in which he calls African nations ‘bleak and primitive’.

At the Jaipur Literary Festival in 2015, Sir V. S. Naipaul, slumped in a wheelchair, broke down seeing Paul Theroux throwing bouquets at A House for Mr Biswas. Theroux was equally moved.

The Swedish Academy, awarding him the Nobel Prize, had lauded his work by saying, “Naipaul is a modern philosopher carrying on the tradition that started originally with Lettres persanes and Candide. In a vigilant style, which has been deservedly admired, he transforms rage into precision and allows events to speak with their own inherent irony. Naipaul is Conrad’s heir as the annalist of the destinies of empires in the moral sense: what they do to human beings.”

At the Nobel Banquet speech, the Barefoot Colonial, as he loved to call himself, wasn’t tired of taking one last dig at the Swedish Academy for giving him only one hundred and twenty seconds: looking at the stopwatch, he ended his speech by saying, “My two minutes are up.”

Up were his eight five years on earth on the eleventh day of August this year, while his literary soul would be alive and kicking in his thirty books, ceaselessly.

Ram Govardhan’s short stories have appeared in Asian Cha, Open Road Review, The Bangalore Review, Quarterly Literary Review Singapore, The Spark, Muse India, The Literary Yard, The Bombay Review and other Asian and African literary journals. His novel, Rough with the Smooth, was longlisted for the 2009 Man Asian Literary Prize, The Economist-Crossword 2011 Award and published by Leadstart Publishing, Mumbai. He lives in Chennai cursing the humidity all the time. Email: ram.govardhan2010@gmail.com