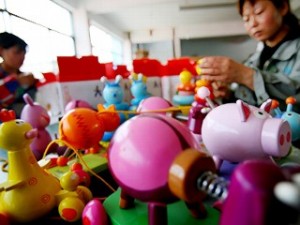 It is well known fact that, Indian markets, like most of the other countries around the globe are invaded by Chinese products because of their advantage on prices and innovative products, comparatively more affordable to the mass. Indians think and believe that Chinese products are cheaper because the quality is inferior and labor charges are cheaper. While the former is partly true the later is absolutely untrue. I had the opportunity of residing in China for the past one year and I took keen and curious interest to understand the truth behind this belief which is found to me an Indian myth.

Let me explain about the surprisingly shocking comparison of labor charges in India and China. A factory unskilled/semi skilled worker in China gets RMB 2300 to 2500 per month; it is equivalent of around Rs. 23 to 25000. They have options of insurance similar in effect to our Provident Fund and health insurance schemes. Where as a comparable category of Indian labor gets around Rs 10,000 per month, with or without other benefits. So is the income comparison of other categories of work force in China- that is about 2 to 3 times more in private sectors and 3 to 5 times more in Govt. Sector than India. A police man gets equivalent of around Rs one lakh in salary.

Then how China is able to sell cheaper? Here let me clarify about Indian impression of inferior quality Chinese products mentioned above. Indian traders are to be squarely blamed for this surely avoidable situation. Because of the profit motive and internal competition in the same line of products, each trader resorts to tight bargain with Chinese manufacturers who in turn compromise the quality to match the prices that the Indian traders seek. I am not indemnifying all Chinese manufacturers or traders from the culpability. There are a few of them tricky and they push rubbish products to Indians who are mostly tempted by prices only. Chinese knowing this Indian weakness well, either avoid or trick them according to business policy of individual manufacturers. Many reputed factories in China, knowing this fact, are reluctant to spend time with new unknown Indian customers seeking their products. Their main markets are being American and European countries they do not need to dilute the quality to satisfy Indian customers’ thirst for bargains.

Main objective of this article is to explain my view as to how Chinese are able to capture the global market and retain a sustainable growth rate where as India remain far below them despite the fact that India is not lagging behind in over all resources, including high quality talented human power, better developed IT sector  and so on.

Productivity is the key. For example, let us evaluate any production project in India. In order to set up a factory in India the time and expenses factors start right from the licensing procedure where inclusion of the cost of corruption and delays at so many levels, including huge donation to political parties and bureaucrats are considered just usual and acceptable here.  In China the factories for the same category of products manufactured are allocated in the same area earmarked for it and there are hundreds of such factories built within one single zone – the advantages are enormous – the raw materials including skilled human resources and other inventories for production are easily accessible and pooled among manufacturers at law transportation cost and minimum lapse of time. In India this cost advantage is largely missing because for most of the isolated production centers the inputs are scattered far and wide of the country. There are no sales tax and central excise check posts in China as seen through out India which is adding a heavy cost and consequential costs by means of additional finance charges suffered from blocking of the investment on inventories during retention and checking period of the vehicles and the contents, besides the palm greasing expenses to the officers. So are salaries and system maintenance cost born by the government for the same? Many such intangible elements add to the cost of product in the end which makes it less competitive in spite of cheaper human resources in India. It could be avoided by employing single point taxation at the zone of the factory when the products are moved out of it and at customs for the product imported.

Then another serious cost escalation factor is poor roads and infrastructures. The roads in India are fuel gulpers, vehicle destructors, pollution friendly and speed unfriendly. Construction of buildings and parking area are lacking vision and mobile efficiency is sacrificed due to poor planning,   all amounting to intangible cost disadvantages. Chinese sophisticated and safest metro system and roads are integrated in such a way that travelers can materialize appointments with minute’s accuracy, avoiding cost of delay ,no matter how far away they are in between , .  Restaurants, shopping malls, stores and so on are integrated with metro and bus stations adding comfort to travelers and income to the semi government metros and bus operators. Participating in many huge commercial operations jointly with major national corporate companies, China generate huge income to the govt., enabling them to maintain lower fiscal deficit, spend huge sum on welfare and infrastructure development, where as India increase the deficit by poor management and corruption in Public sector companies prompting to sell them one by one to the private sectors which will turn it into profit making companies soon after these are taken over !!

The factory efficiency is excellently explored and maintained by means of unique Chinese management systems and work culture. The production process and planning are set up in such a way that workers and staff are made to use their optimum efficiency throughout their working hours. The in-line production system is most common in factories for increased efficiency and accuracy. The human resources are disciplined and are aware of their rights and responsibilities. Factories hardly dare to exploit them as their unions are ever strong and apolitical.

Chinese are generally inclined to spending generously in restaurants, on consumer goods, fashion accessories, beauty products and entertainments, but not investments on unproductive area like gold ornaments or solid gold, like Indian obsession. Not only their income is at an average of 3 times more than that of Indians but their spending also is proportionately higher. Chinese buy high quality branded products only. So the local outlets usually display high standard and quality products in their shelves. This spending culture makes their domestic consumption ( GDC) and the resultant product demand and employment opportunities expanding and sustained, keeping the process in a progressive chain ! GDP of China is largely enhanced by the contribution of Domestic Consumption which is much lower in India due to poor disposable income and unwise savings. Government being share holders of most of the leading corporate companies in China the income from those sources enable the projects and plans implemented on time. However since past 10 years an average Chinese increasing grievance is about poor affordability of owning a residence in urban areas where the real estate prices skyrocketed with the unprecedented real estate boom. Owning a house is a matter of status in Chinese community. Many marriages are delayed beyond usual time for want of owning of residential property by prospective bridegrooms. In order to mitigate this issue Govt. has already initiated actions. Since last year a law is enforced restricting individuals from buying residential properties beyond a limited numbers so that the price is kept in down ward move in order to be within the reach of common man. However the downward movement of real estate is very slow due to holding capacity by that huge money power accumulated by a few Chinese from the phenomenal income generated in the recent economic growth. Other than that we can observe that Chinese faces are radiating happiness with a feeling of freedom of life…