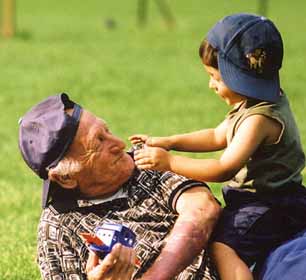 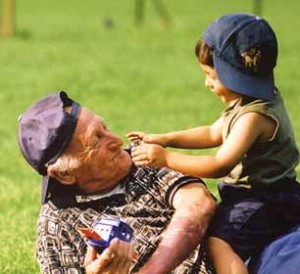 A grand father carries his grand child on his back or shoulder playing himself as a horse or an elephant, the grand child becomes the rider and pilot. Both have voluntarily agreed to play the game for deriving mutual pleasure. During the course of the game, both have freedom to move, make maneuvers and howl to the extent that they do not disturb the other family members and also do not hurt each other.

Sometimes, the grand child in his excited moment screams and tears the clothes of the grand father or pulls his hair, where after the latter admonishes the former with tacit advice not to repeat the act, lest the game will come to an end. The above small example manifests various aspects of a common phenomenon. Both had agreed to play with freedom within a limit, here there are teaching and learning aspects as to what to do and what not. It also sets up a tradition. When the grand child grows up to become a grand father, he with some changes may lovingly play with his grand children in a similar manner. Such examples are not confined to lives of human beings.

Tiger cubs play with the mother tigress by biting her tail, getting on her body and scratching all over with soft claws. They play with freedom till the game hurts or the tigress has to go either for prey or smells fear. The tigress then pulls out softly holding them with her mouth indicating the end of play. The elements of freedom and its limit, when to end the game, teaching and learning aspects, and setting up traditions are embodied in the game. 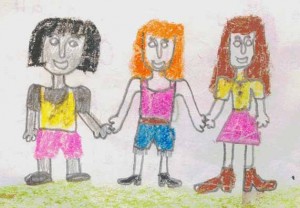 Freedom is exercised because other associates allow it either unknowingly, passively, consciously, or under compulsion. Involvement of more than one subject or object in any manner and any form of action entails participation. All subjects and objects, those who come into existence are manifestations of participation with others for creation, procreation, habitation, alterations and willingness of proceeding further within the time coordinates. All forms of participation have certain degrees of freedom for manipulation and maneuvers within a pre-defined   boundary limit.

An individual, during his normal period of sojourn and even when he wishes to remain secluded is not entirely alone. There are others in the vicinity depending on the measurement standards of space and time, be it, centimeters, kilometers, light years of length and seconds, years, millennium of time. He can choose his friends or foes in the family, in the country or else where in the universe depending on his reach and imagination. His normal course of living or seclusion came in to being because other associates, friends or foes allowed him some degrees of freedom for action or inaction.

All events become history. Sequence of events and results there of (or consequences) give rise to chains of happenings. Many such chains join or disorient to create more new chains of events. All previous events are responsible for creating new events by way of positive or negative participation. All happenings are generated through sequentially threaded results of previous events. In other words, all objects, subjects or abstracts are products of “Consequential Sequences”. Existence or annihilation occurs because of participation. 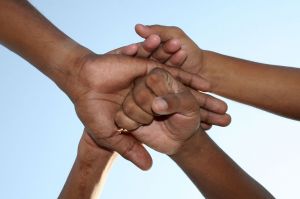 cer. The game takes place in a pre determined location having a foot ball field, with designated players of both the teams, captains, umpires, pre requisites of the game, such as, corner flags, uniforms, soft drinks for the break, etc. The game has developed to this stage over a period of years in codifying rules and regulations, requirement of perquisites, based on past practices, history of events, experiences  for facilitating the game. One team wins and the other looses because both participated in the game. The win can not be said only to be a matter of luck or destiny. The winning team played better on the occasion based on coaching and guidance received from the coach, long practice and that the rival team played to a lesser extent. Some players were relatively more innovative and took opportunistic steps during the game, a welcome freedom and manifestation of consequential sequences to further the interests of their teams.

All these, staging of the game, win and loss and choice of players had history, elements of consequential sequences, participative living and participative freedom. Sequence of events and their shared results (consequences) will propagate their tentacles in all directions. Some of them will maintain continuity, but a few would be conducive for participative growth including participative freedom to generate meaningful actions. During the passage of time, some develop, some stay in status quo, others perish, because of participative interaction, freedom of living in conducive or hostile environment. The process of evolution is a glaring example of participation of living species and even, environment, ecology, geographical situation, habits and mode of living. All concerned participated with certain degrees of freedom continuously or intermittently.

Negation, interruptions, disagreement, antagonism, rivalry, arguments, debates and competition are also forms of participation and involve participative freedom. They open up scope for deciding the right course of action. Darkness exists because of light. If light pervades every where, there would not be darkness. They are complimentary to each other. A glass tumbler is visibly half full of water; the other half is not empty. It contains air to the brim.  Our perception is not in correct as long as we do not say that the tumbler is half empty. Fullness and absence of the same remain side by side. One of these aspects can not be defined without making reference to the other. 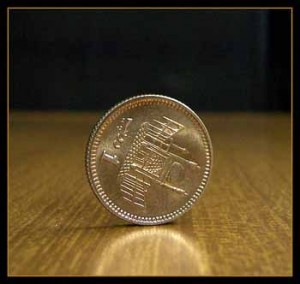 A coin has at least two sides. They are integral and inseparable parts of the same object. The thin surface constituting the thickness of the coin forms the boundary layer and also maintains continuity of both the sides. It is our perception that separates the two sides as different as we cannot see full surface of both the sides at the same time. With help of a mirror, we see the reflection of the other side. Reflection ushers imagination and perception of the side that exists, but not directly visible.

Similarly, freedom and restrictions go hand in hand.  Beyond the boundaries of participative freedom, there is turbulence and chaos. The elements of restrictions provide guidelines for procedures, laws, rules, practices, ethics , norms and  means for ‘What to do’ within the limits and  ‘what not to do’ beyond the limit. The guidelines for limits of participative freedom were some times established through customs and practices, but mostly formulated by individuals and groups, who were either powerful and autocratic or chosen and accepted by the followers. These individuals and groups come from various disciplines, can be benevolent and tyrannical. Those who are capable of accepting criticism for correction open for debates and in composed state of mind can provide guidelines beneficial for the society. On the contrary, guidelines devoid of natural justice, forced upon and not acceptable to majority of the people can not remain in continuity. Rigidity often impels to break the norms. Coercive methods though can quail the uneasiness for some time, they are transient and will ultimately result in disturbances, turbulence and chaos. The chaos will settle after moving through the required course of action, but would take time, compared to the path engineered through meaningful, persuasive, acceptable and beneficial methods

Principles are paths guided by ethics. They have elements of freedom, exercised some times with frenzy, without giving thoughts as to who is the guardian of such principles. Individual and mass psychology some times differs in interpreting the course of action to be taken. A pick pocket was caught red handed. The culprit is to be punished. While the person responsible for catching him wanted to handover the case to the police, suddenly some body give the culprit a slap. What followed there after is a volley of fists coming from all sides. The victim becomes immobile due to the outrage, and the crowd then disappears. This freedom of action was spontaneous and received its strength from the multitude of the gathering. The mass psychology or plural psychology some times goes beyond the boundaries of ethical principles.

In Indian societies, the principle of participative living and participative freedom are deep rooted. We have joint family system, where the head of the family gives guidance and support for running the house hold and bringing up the progenies. Individual members, both young and old have broad defined course of actions to follow. At the same time, all of them have enough degrees of freedom to make work enjoyable.

We have family functions, community festivals, mass prayers, congregations, open air performances, etc.  to provide recreation, enjoyment,  venue for personal and mass contacts even for  adoring and submitting to the All Mighty,. Every one, the organizers, nodal monitoring agencies, performers, followers, onlookers, observers and bystanders have their duties cut and defined for smooth running of the acts. They mingle with freedom so as not to out rage the others. If they do so, there would be chaos in the social fabric. Aberration of principles is against the ideals of participative living and participative freedom.

The norms and codes of conduct are practiced and formulated based on hierarchical, emotional, religious, geographical, economic and political back grounds. Besides being derived or extracted   from history of customary practices, the sense of ethics is some times borrowed from the vicinity.

In temples, Hindus as a part of rituals of worship, beat drums, blow conchs, ring metal bells to herald the time of worship. The believers, residing in areas covered with thick greenery will come to know the announcement of time for offering prayers. Muslims chant religious verses atop the high mosque for the purpose, so that people residing in scattered open areas without vegetation come to know about the time of prayer. The practices were formulated at the time of origin of rituals based on geographical back ground. The guidance was given and the people were free to offer prayers at any place they happen to be at that time.

The traders and businessmen make money by selling commodities at a higher price than the values inclusive of cost of purchase, efforts, labour, utilities and services. The guide lines for the selling price are demand, what the competitors offer and customers’ acceptance, even under duress. The cost of a cup of coffee at road side shop is much lower than that at a star hotel. The higher cost at the star hotel is acceptable to customers, who are willing to pay for the services. Thus, norms, ethics, codes of conduct, principles, practices and participation though defined under broad guidelines, are circumstantially flexible with some inbuilt elements of freedom.

In the court of justice, parties deposing before the judge vouch to tell the truth, nothing but the truth, swearing in the name of God and holy texts. Culprits afraid of bearing punishments for misdeeds indulge in acts beyond the norms.

Similar is the story of election codes of conduct formulated by the Election Commission and observed by the future representatives of the people. Cures lie with self realization, self discipline, and self administration of codes of conduct. Otherwise, chaos would prevail over the system.  Considerable developments have taken places in fields of food, clothing, dwelling, travel, communication, education and entertainment to provide ease of living to the humanity, yet there is dissatisfaction around, because some people manipulate to extract more than they deserve at the cost of others, forcing ethics to take a back seat. A more livable life can be realized in the society, if all persons irrespective of their vocation, belief and faith take a little effort to understand the essence of norms, ethics, participative living and participative freedom.