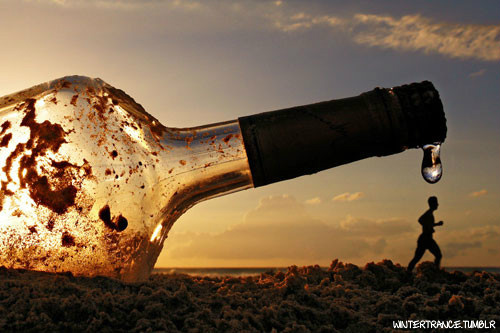 The blue flame of the driftwood fire crackled merrily, sending a few embers up to the starry sky. The sea could no longer be seen, but the sound of the waves crashing on the beach, hovered around us, intermingling with the dull hum of human chatter. While there still was light, this Western Australian beach had looked exactly as I expected to look like. Just like the beach where Mitchell Johnson had posed for photos along with his family for the promotional event of his book.  Miles of silky, golden sand with a few small tufts of sea grass here and there.

I sat in a circle along with the others around the drift wood fire, and he sat directly before me, on the other side. His golden hair quivering in the briny breeze, his hands slapping his thighs as he tried to keep beat to the song blaring out of the portable speaker. His damp beer can set on the sand at his feet, dripping of moisture, exactly like mine.

‘There’s a voice in my head, saying don’t be afraid to tell the truth at any time….thinking what I have done…’

“If only he had drunk less, it could…” my grandmother stopped short the moment she saw me enter the room. I was quite young but I knew who she was talking of. The air around was always heavier when this subject was breached and grandma’s tone was unnatural, different. They were talking of the most prominent absence of my life- my father.

I could never figure out why drinking was so harmful, because in my head I always thought of drinking water. I hadn’t learned of the existence of alcohol yet! And the problem was nobody ever told me any of these matters. I would overhear these stories, sometimes accidentally and sometimes intentionally, and concoct the rest of the story on my own. I can still see myself stand behind the curtains and hearing things like, “he got drunk…singed me with his cigarette…” or something like, “…went to the office drunk and hit…”

Although, I never heard the full story I was aware of its salaciousness. The result was that puny, little I grew suspicious of water. What could it be with water that drove father to such extremes? I drank as little as possible.

It wasn’t until I had read Roald Dalh’s story with the drunken uncle, in school, that I knew what “drinking” meant. I drank water without any though after that, but when my school friends went to have their first taste of the bottle, I hid in the basement. I couldn’t go and I didn’t know why.

Years later, my favourite professor, told us of the Great War. Of how during World War I, the two enemy camps had come out of their respective trenches and celebrated Christmas together! Even though, they knew that they might have to kill each other the very next day. The Germans had called out to the French, if they would like to have Beer with them and the French had cheekily replied that they preferred Champagne, before joining them. The story touched a chord, the fact that in the face of eminent death, the enemies had come together and their accompaniment was alcohol.

I decided to take matter into, my own hand and confront my fears. So one day, I opened the liquor cabinet at home and chugged down half of the contents. I kept repeating it over in my head that I was fine, I had done nothing violent or hurtful, nor was I going to, as each mouthful burned its way down to my stomach. I felt none of the emotions I had expected to, on the contrary I felt numb, unable to feel anything and dreadfully aware of my lack of feelings. I felt this enormous wait on my shoulders, weight of my own fears and expectations and I felt as if I could not lift myself out of the dark hole I had locked myself in. I remember crying and a dim droning pain at the centre of my chest. I did not try again.

“Mate, yer can’s gone all hot, are ya gonna drink it or not?” my neighbour punched me playfully on the arm.

Across the fire, I saw his face snap up in my direction.

“I’m fine” I smiled, my eyes fixed on his. He nodded in assent.

I guess, you never know, what you connect over, just as the soldiers in the war had demonstrated.