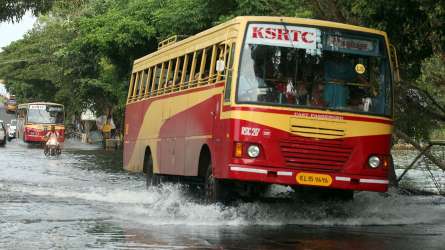 I don’t know who designs the alarm bells on my phone, but he definitely knows how to make me irritated. Each 10-minute snooze on my phone feels like just 1 second. I reluctantly pull myself out of the bed, thinking that this should be the relativity of time. In reality, it is the moist and cool monsoon mornings that tempt every Keralite towards the snooze button.

I feel satisfied only when I apply the toothpaste generously over my toothbrush even though my mother insists on keeping it to a ‘peanut size’.

I hurriedly swallow my breakfast, put on whichever shirt and pant that I first see and run towards my bike. The bike too cannot resist the coziness of the monsoon and struggles to come to life. Then I realize that it had run out of petrol. Cursing my bad luck, I grab an umbrella and run towards the bus stop.

My Uncle, who lives next door, watching all the drama, gives me a sarcastic smile. He then asks me- “Son, is there electricity in your house?”

“Yes”, said I, thinking that he is genuinely concerned this time.

“Then why don’t you iron your shirt son?”, he asked.

Knowing he was expecting a watery diluted smile from me I shot back a question-“Can I borrow your scooter?”

Giving me a watery smile, he replied “I have to give it for service today, else I would have”

I gave him a sarcastic smile.

In my opinion, the retirement age of bank employees should be raised from 60 to 70. In addition to helping the government achieve the dream of a 5 trillion dollar economy, it would give the youth like me some peace of mind.

As I run-jog-walk-repeat, highly irritated by the things so far, it suddenly starts to rain. The thing about Indian Monsoons is that they are highly unpredictable. It drizzles, showers and pours in a matter of seconds. And the thing about electricity is that he is the arch-rival of rains. If the rain comes to meet you, then he is offended and he leaves.

I notice a group of youngsters enjoying the rains and staring at me as I take out my umbrella. Probably thinking how unfashionable I am to use an umbrella. I shift my glance to the other side of the road where I see a cat, which turns its back and walks away on seeing me.

I say to myself -“even the cat thinks that I am unfashionable. What a day!”

On reaching the bus stop, I check the board on which the bus timings are written, pretending to be busy in front of the people at the bus stop.

There was a lady in sari, probably in her 40s, worried about her never-ending household work, a middle-aged man, probably thinking about how to afford his child’s growing tuition fee, an old man, in an over-sized and wrinkled shirt, thinking about the love he never got back from his children and an upset girl, who was shouting over the phone.

The bus made a mockery of the bus timings table by arriving 20 minutes late. But these regular travelers never cared. To catch up for the delay, it came at a speed just short of an airplane take off.

The city buses in Cochin (Kerala) are color-coded green, which reminds me of a giant caterpillar trying to move as fast as possible and then take off and evolve into a butterfly.

Once the bus halts, I see the lady in Sari, the middle-aged man, the old man and the upset girl transform into little rhinos-pushing their way into the bus door. I carefully wait for the rhino stampede to be over. I wondered why people would rush to get onto an empty bus.

Despite being social animals, we chose to sit on different seats, as if we had conquered a new land that we could take home.

Even though the bus had a fresh new green coat of paint on the outside, it was pretty ordinary on the inside. Rusted iron fences that separate the passengers and the driver, seats on which only 2 malnourished people can sit comfortably, a pole which partially blocked the way to the seat and the half loose bolts that sound rhythmically when the bus moves forward.

There was a miniature Pooja room in the bus. Lord Shiva occupied the center spot, who got all the scent from the Agarbattis and fresh flowers whereas Jesus and Allah settled with permanent plastic flowers.

Then there was the conductor in his khaki, holding folded notes wrapped around his middle finger, with the same old bag which can never be seen associated with any other profession. As I bought my ticket I observed his acrobatic skills, standing steady as the bus navigates through potholes.

Besides the driver and the conductor, there used to be a person called ‘Kili’, which means bird in Malayalam. His job was to help the driver navigate the bus and manage the passengers. I wondered whether he too vanished with all the other real birds in this haphazard urbanization.

The traffic lane system is a joke. If it is a 2-lane road there will be 4 rows of vehicles, if 3-lane then 6. Being seated on the tallest seats, the bus drivers feel that they are the king of the roads. They keep honking no matter what- at silence zones like hospitals and schools, at red lights, behind vehicles with an ‘L’ board, etc. Each time the driver honked I felt my blood pressure shoot high.

At the next stop, a wave of manual workers swarmed into the bus. They were mostly migrants from north-India. I observed one guy who was short but well built, his muscles struggling to fit inside his yellow T-shirt, his shabby jeans and his colored hair. As he came and sat next to me it started to rain again.

I tried to close the rain shutter on the window which appeared to be jammed. I tried using both my hands but in vain. The guy sitting next to me said “Bhaiya” (Brother) and effortlessly closed it with 2 fingers.  I suddenly felt like a 2-year-old, who needed his father’s help to pedal his tricycle.

I smiled at him.

I could see how his face lit up from the little gratitude and love that he got from a native. Despite the cool rains, I felt warm in my heart. Like a fly in a spider’s web, caught by his radiant smile.

The migrants are made to toil from dawn to dusk, like some machine, with no Sundays, no paid holidays, no medical and casual leaves. They live in over-crowded houses, with more than 15 people, yet they never complain about anything. In addition to all this, they are called ‘Bengalis’ even if they are from Odisha or Assam.  They are more than satisfied if they can visit their family once in a year, content with 3 meals a day and besides all, overjoyed by a simple smile. And here I am, frustrated about my bike without petrol, my uncle, the cat and the late bus.

When all the rain shutters came down, the bus turned dark inside. The driver then switched on a light which continued to flicker, making us feel like we were in a dance club.

Just before I got down, I saw the middle-aged man who looked worried at the bus stop, talking to another migrant in Hindi. Even though I couldn’t make out what they were talking, I understood that he was stress relieved. I then looked at the upset girl, who was shouting over the phone at the bus stop. She was peeping out through the rain shutters and enjoying the rain. The lady in Sari was busy chit-chatting with her travel buddy. The old man had peacefully slept amidst all this noise.

I got down at my stop completely refreshed, like a slate wiped clean. There is something about bus rides that you don’t get in the comfort of a car or the convenience of a bike. On my bike, I end up cursing every ignorant driver, careless pedestrian, apathetic policeman, over speeding bike riders, dysfunctional traffic lights, corrupt politicians and contractors who build the road laden with potholes.