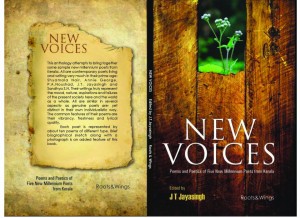 “Through poetry we approach fresh and unexplored areas of meaning. It is never a meaning in finality we can only hope to have approached an understanding very remotely.” These are the words of Shyamala Nair, one of the five poets forming part of NEW VOICES, a collection of poems and poetics of five contemporary poets living and writing in their prime age, released recently at the Darsana International Book Fair at Kottayam. The cover design of the book has fetched the Darsana special award in the category for its artist Joseph Francis, adding luster to its publication. The book is part of a non-profit venture by like-minded writers, who have collectively brought out the book in the banner of Roots and Wings.

Shyamala’s poems remind one of the great Wole Soyinka’s. Completely soaked in Indian culture, as Jayasingh, the editor and poet puts it, the poems try to explore layers of meaning in each and every traditional objects and practices of the culture. A classical approach to life elates her and her poems to a higher altitude of fineness. Although many of Shyamala’s poems live in nostalgia, where the death of a past is never reconciled (as in Amaravati, Mervin D’Costa and Exiles Revisited), they encompass a whole spectroscopic range of emotions. Her poetry reiterates the fact about Eliot’s warning that mankind cannot bear too much reality, rings true especially when one chooses the many surrogate means to counter it. One of the richest means, according to her, of circumventing the glare of reality is through poetry. It soothes and relieves reality of its sting.

This is about the same curative and therapeutic purpose that serves Annie George’s poetry. She confesses that the compositions For Aparna and its sequel Peace on Your Birthday, proved to be cathartic for her, in a career of writing poetry for twenty-seven years since the age of twelve. Themes from nature and human relationships abound in Annie’s poems. While a fascination for her father tending to flowers in his garden catches her attention in Gladioli, it is the outspoken observation of a friendship (rather than kinship) shared by sisters in a family that forms the core of Between Sisters. Often, she uses the limerick and sonnet forms (Batteries and Open House) to reflect upon current state of affairs or events.

P A Noushad’s poems are romantic, philosophic and psychological at the same time. He delves into the human mind and soul to discover the meaning of life and oneness in many. Again, as for Shyamala and Annie, poetry is for Noushad an uninhibited foray into the realities of earthly life, reminding us that we are not here for long. Noushad struggles to seek the eternal truth as in Metamorphosis and

is evident. Poem is a lovely realization

‘your life is the most beautiful poem,

The one who brings life to perfection

is the greatest poet.

The rules of a poem are

the wings of love,

and it keeps you

on the edge of your seat.’

Nature’s visual beauty fills his lines and as he aptly puts it, they ‘fondle our hearts.’

J T Jayasingh’s poems deal with the stark realities of life and his voice cries out seeking order in a chaotic world. Again like Noushad, he finds everything in the universe connected-animate and inanimate; past, present and future, living, dead and yet to be born. For Jayasingh, as he puts it in his poetics, ‘poetry is the language of the human soul.’ His philosophy comes out well and clear in the poems Farmer, Her Marble Legs, and The Train I Travel, where he champions the cause of liberty and equality. The wide chasm that separates the ‘ çlasses’ is portrayed well in The Train I Travel.

Raw, robust and romantic, Sandhya SN’s poems are at times confessional and reflective at others. They are a faithful visualization of the chaotic stream of human emotions and thoughts. Her writing is a struggle to find fine tuned chords out of this chaos. Powerful words are employed with lots of musical resonances to heighten the intensity of emotions. As for Annie and Shyamala, poetry turns out

She loves ‘to play with these syllables’ (Still….I am in Love). The craft of composition, for Sandhya stems primarily in solitude where she finds the right ambience to give vent to suppressed thoughts.