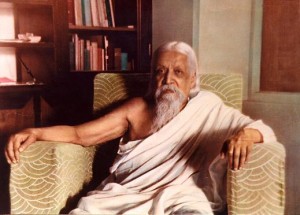 “It is not often that we see published in India literary criticism which is of the first order, at once discerning and suggestive, criticism which forces us both to see and think.” (1)

Aurobindo views that the poetic vision follows the evolution of human mind and according to the age and environment, it has its levels, its ascents and descents and its returns. He thinks that poetry does not depend on the individual power of vision of the poet, but on the mind of his age and his country, its level of thought and experience, the adequacy of its symbols, the depth of its spiritual attainment. He pleads for the ‘mantra’ in poetry. He seems “The Mantra as born through the heart and shaped or massed by the thinking mind into a chariot of that godhead of the Eternal of whom the truth seen is a face or a form.” (The Future Poetry,1972: 200). He further adds that poetry is the Mantra only when it is the voice of the inmost truth and is couched in the highest power of the very rhythm and speech of that truth. He says that The Mantra is a supreme rhythmic language which seizes hold upon all that is finite and brings into each the light and voice of its own infinite. Thus, Aurobindo presents his theory of poetry of the rhythmic and creative self-expression which requires an important place in Indian criticism. His writes about the work of the poet:

“The work of the poet depends not only on himself and his age but on the mentality of the nation to which he belongs and the spiritual, intellectual, aesthetic tradition and environment which it creates for him.” (38)

T.S.Eliot writes similarly in “Tradition and the Individual Talent”. Aurobindo considers a poet or artist as a medium for creative force which acts through him, it uses or picks up anything stored up in his mind from his inner life or his memories or impressions of outer life and things. Aurobindo criticizes Arnolds’s theory of poetry as “a criticism of life”, and argues instead that, the poetic vision of life is not a critical or intellectual or philosophic view of it, but a soul-view, a seizing by the inner sense. He emphasizes on poetic truth in following words:

“Truth of poetry is not truth of philosophy or truth of science or truth of religion only, because it is another way of self- expression of infinite truth so distinct that it appears to give another face of things and reveal quite another side of experience.” (212)

Aurobindo distinguish the truth of poetry from other truths whereas I. A. Richards distinguishes between the language of poetry and the language of science. Aurobindo is a critic with original critical insight. His assessment of English and European poets occupies an important role. His following classification in rows of the world’s greatest poets is noteworthy.

Aurobindo’s evaluation of Milton, Pope, Dryden and British Romantics is considerable even today. He speaks of Milton’s ‘grandiose epic chant’, unredeemed intellectuality which breaks the complete silence of genuine poetry. Of Dryden and Pope he writes that it is not the gold of poetry for all that, but it is well guilt copper coin of a good currency. C. D. Narasimhaiah observes that , “one has only to read passages of Pope’s poetry carefully for a full appreciation Aurobindo’s remarks and no claims of ‘order’, ‘decorum’ and ‘positive  civilization’ will help to mitigate the monotony, the decisiveness of the verse which he explains as a long string of couplets. Interestingly, this is very close to the still valid distinction Matthew Arnold made between ‘genuine’ poetry ‘composed in the soul’ and that which is composed in the wits.” (105-106)

To Aurobindo the poet is ‘Seer’, ‘Kavi’, and even ‘Rishi. He believes that the great poet interprets to man his present or reinterprets for him his past, but can also point him to his future and in all three reveal to him the face of the eternal. Aurobindo’s comments take the form of practical criticism. As a critic we see his open mind. He shows an awareness of English language for various purposes. He warns: “Don’t talk of the spiritual inadequacy of the English language, the inadequacy does not exist, and even if it did, the language will have to be made adequate.”(Narsimhaiah, 1986:102). He is also conscious of the fact that the English language is not naturally melodious like the Italian or Bengali- no language with a Teutonic base can be- but it is capable of remarkable harmonic effects and also it can by a skillful handling be made to give out the most beautiful melodies. Aurobindo pleads for  ‘Mantra’ in poetry with emphasis on ‘Ananda’. The ‘Mantra’ is a word of power and light that comes from the overmind inspiration or from some very high plane of intuition. ‘Ananda’ is explained by Aurobindo in the following words:

“Beauty is not the same as delight, but like love it is an expression, a form of Ananda, created by Ananda and composed of Ananda, it conveys to the mind that delight of which it is made……Love and beauty are powers of Ananda as light and knowledge are of consciousness.” (The Future Poetry,1972: 492)

Aurobindo pleads for Mantric poetry which delights the readers. Aurobindo has an encyclopaedic range. Not only English authors but European writers all come under the critical purview of Aurobindo. Ancient Indian works like Vedas and Upanishads are also studied by him. Aurobindo has used Eliot’s observation ‘Comparison and Analysis’ in his criticism. He has studied Milton beside Dante, Homer beside Valmiki and so on. His theory of translation of poetry is very fascinating. He think that there are two ways of rendering a poem from one language into another- one is to keep strictly to the manner and turn of the original, the other to take its spirit, sense and imagery and reproduce them freely so as to suit the new language.

Aurobindo’s observations about the poet and poetry create special place in Indian criticism. He is the first Indian English critic of poetry with a theory of his own. His assessment of English authors remains as a gift for the readers.