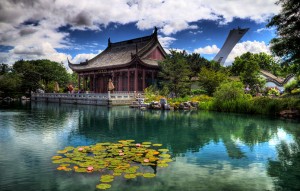 Singapore is believed to be paradise on earth with celestial beauty everywhere and the Chinese Garden is no exception to the fact.

With exacting sustenance in the air’.

Chinese Garden also commonly known as Jurong Gardens, is a park in Jurong East, Singapore. Once you step into the Chinese Garden you may imagine that you are in ancient China! The Chinese Graden was built in 1975 with breathless efforts and was configured by Prof Yuen-chen Yu, a renowned architect from Taiwan. The Chinese Garden is modeled along the northern Chinese imperial style of architecture and landscaping. The main feature is the integration of splendid architectural characteristics with the natural environment.. It is located next to the Chinese Garden MRT Station and connected to the adjacent Japanese Garden by a bridge.

It is a Chinese belief that the lion is the animal representing authority and allegiance. Thus, the cloudy-grained marble stone lions at the gates of the Chinese Garden, typically Chinese in style guards the main gates of the Garden. They are skillfully sculptured from Taiwan imported marble stone.

You will first be greeted by the “Pai Hung Ch’iao” (meaning “white rainbow bridge”, 13 Arch Bridge) which follows the style of the 17-Arch Bridge at the Summer Palace in Beijing. Upon crossing the bridge, you will see a typical Chinese arch building which contains two courtyards namely the “Early Spring Courtyard” and “Garden Courtyard”. and a fishpond in the center, named the “Fishes Paradise”.

The newest addition to the Chinese Garden family is the Garden of Abundance. The original name of this garden is the Zodiac & Pomegranate Garden, derived from the elements used in the construction of the garden.

It consists of 100 pomegranate trees from Shantung, China that have been carefully planted into this new garden. It rests among the twelve Chinese Zodiac animals sculpture, a sundial, stone bridges and planting of materials, which signify infinity, abundance and gratification. Hence the name Garden of Abundance was selected.

This creative concept of Chinese Garden is a new scenic spot designed according to Chinese tradition and folk culture. And most importantly, the theme and design of this garden bestows sincere wishes dedicated to the visitor.

A signature architectural building of the Chinese is the pagoda, used in ancient times by the Buddhists to keep human bones. The seven-storey pagoda “Ru Yun Ta” follows the style of Ling Ku Temple Pagoda in Nanjing.

Two traditional features of Chinese architecture are the ‘Yao-Yueh Fang’ (Stone Boat) and the ‘Ming Hsiang Hsieh’ (Tea House), the latter is a miniature structure following the style of the elaborate, winding gallery at the Summer Palace. Its unique design and splendid architectural beauty is a fine art which has long been appraised by people throughout the world. The style of ‘Yao-Yueh Fang’ (the Stone Boat) in the Chinese Garden is based on the Peking style, but there are some adaptations in the design and due to the materials used an exquisite and highfalutin form is obtained.

Apart from buildings, gardens are a constant motif in the Chinese Garden. Around the Chinese Pavilion, Plateau and Tower are interwoven plants, rocks, a winding stream and footpaths to create a harmonious scene. The Chinese Pavilion, Plateau and Tower represent the soul of the Chinese gardening art. The artistic features, typical of Chinese architecture have long been appreciated by man. The arrangement of these structures is very significant and one of the essential rules of the structural arrangement is that the position of each structure must be balanced by its height and size.

The design of the four pavilions at the Chinese Garden is based on the style of Northern Chinese Pavilions, and decorated to blend harmoniously with the Garden.

A Suzhou style Bonsai Garden built at a cost of SGD 3.8 million has a collection of about 1,000 bonsais mainly imported from China. This world-class bonsai garden has been given a facelift.

The other features of the Chinese Garden are as follows:

The Live Turtle and Tortoise Museum exhibits different species of turtles and tortoises. The highlight of the museum is that it displays exotic types of tortoises, such as tortoises with two heads and six legs where only one in every few million of these rare species will survive. 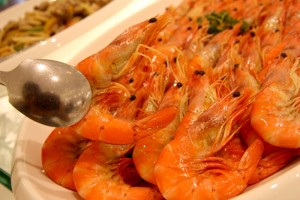 Serving all kinds of seafood, southern and northern China cooking, Peking, Szechuan and Cantonese cuisine, You Yuan Seafood Restaurant is located on the Stone Boat, overlooking the calming waters. There is also a dancing arena and karaoke, set on a classy, unique traditional Chinese theme. It is open for both lunch and dinner.

This entrance was specially constructed in conjunction with the Chinese Garden MRT station, to ensure easy access for pedestrians visiting the gardens. Upon approaching the garden, there is a Red Bridge that will lead you in. This Red Bridge represents good luck and is a propitious colour for the Chinese.

Singapore Chinese Garden’s annual Mid-Autumn Festival is one of Singapore’s highlight of the year.

In the Chinese Garden you will come across myriad statues namely those of Confucius, Wen Tianxiang etc. These statues reminiscence a poem composed by me which is below:

Singapore is a small city with umpteen attractions, parks, ethnic enclaves and distinctively different atmospheres to explore. Man’s life is a voyage where he encounters multifarious experiences and only some leave indelible impressions on the sands of time.

However, Chinese Garden is a stamping ground where you will always find people from diverse cultures, countries race and religion which makes the junket more noteworthy.