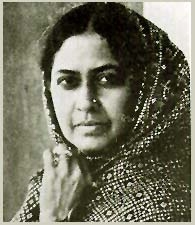 The role and position of woman in India was much fixed, determined and nevertheless discussed widely as a negative, subversive and retarded by more or less repeated projections and assigning more importance to the books like Manusmriti than others. But the menhir of male centric projections could be somewhat disassociated if not utterly demolished in a way of myths, legends, religious books and other types of texts and practices of Indian religion, society and culture. The prominent women of Upanishads namely Maitrayee, Gargi, female ascetic Sulabha etc. are examples of women emancipation in a male-centered society, engaged in a religious exploration of soul and spiritual dialogue. The Indus civilization attests the goddess worship possibly for fertility and regeneration that adds distinction from Greek civilization where Dionysus, the male god was worshipped for the same reason.

Many historian argued that Buddhism was in a way a giant step towards formulating a new concept for woman, as Ann Klein aptly concludes ”When Buddhism appeared in the 5th century BC the sanction of female clergy was itself a radical departure from the centuries of patriarchal tradition.” A Buddhist woman records her ecstatic delight in ‘Therigatha’(a Buddhist text) to have emancipation from both house and husband:

“O woman will set free! How free am I

How thoroughly free from kitchen drudgery

Me stained and squalid among my cooking pots

My brutal husband ranked as even less.”

So, despite the predominant male-centric attitude and notional projections, there are of course distinct and specific voices of woman present and expressed sternly in Indian civilization both in Vedic and Buddhist era. In Shantiparva of Mahabharata, we got the glimpse of female ascetic Sulabha being dubbed by king Janaka as ‘woman’ and therefore incapable of spiritual salvation and knowledge, answered that if Janaka (revered as rajarshi or the saint king) were truly emancipated he could not emphasize on gender difference. Because, ultimately there is no difference between souls. This proves her superior knowledge and also asserts her definite and distinct voice in the patriarchal culture.

Kamala das (1934-2009) may be placed in a sense in the discourses of female voices that distinctly represent themselves in a male biased and male-voiced universe. Her status as a producer of woman’s text is acclaimed, fortified and respected also. Das’s poetry in the veil of soliloquy and monologues determines nonchalantly the post-independence Indian womanhood, who are ready to unveil and yearns to set a footprint of their own from the traditional orthodoxy. Vrinda Nabar acknowledges her as the first Indo-English woman poet “to write convincingly of her femaleness.” In fact her poetry remains the unending monologues of self-conscious womanhood and celebration of her femaleness.

Ever since the publication of her first anthology of poems ‘Summer in Calcutta’ (1965) she has been regarded for her unflinching honest expression of that womanhood and female sexuality and role of woman in traditional Indian context. Das’s strength lies in the spontaneity with which she records ‘her most intimate responses on uninhibitedness which even now is more or less unique in the Indian society’ with her making private thoughts public. Her volume of poems like ‘Summer in Calcutta’(1965), published by the Everest Press in Delhi, second volume ‘The Descendants’ published by Writers Workshop, third volume ‘The Old Playhouse and Other Poems’ published by Orient Longman in 1975, ‘The Annamalai Poems’ in 1988, ‘Only the Soul Knows How to Sing’, 1996 published by DC Books and her last collection ‘Ya Allah’ in 2001 all more or less deals with the journey of her womanliness through ‘tireless waiting’ to someplace where she can pronounce and claim herself ‘I too call myself I’. It has been often claimed that Das writes autobiographical sagas in an attempt to ‘mythologize’ her personal life. Das’s somewhat unhappy marriage (her autobiography controversially describes her husband’s homosexual liaison, emotional torture and neglect) makes her seek and speak intensely personal experience of her unsuccessful quest for love both in and outside the marriage bond with frustration on the tradition-tied society, jointly compel her for a journey towards spiritual revelation, at least an attempt towards where love together with the connotation of bodily desire and sexual hunger merged, subdued and made one into a singled whole . Virginia Woolf was of the opinion that any woman in the profession of author compelled to take two enterprises, the first is to kill the angel in the house and second it to tell the truth about her own experience. She claims to have been successful in the first while failed in the second. Das perhaps can claim to succeed in two. ‘An Introduction’ is an introduction of the post independence Indian feminism thoroughly imbibed with western education and a desire to liberate herself, creating her own nation, traverses the whole area of womanhood, the ultimate genuine female experience like:

“He drew a youth of sixteen into the

Bedroom and closed the door , he did not beat me

But my sad woman body felt so beaten.”

Das describes the agony and anguish of woman body in sex shrinking pitifully reconciling her inner self at once, “I am every woman who seeks love”, coming into the ultimate realization-

I am a saint I am beloved and the

brightly calls the famous lines of Chandogya Upnishad “the ‘I’ below the ‘I’ above the behind the ‘I’ before …the I alone is all this.”it proceeds from the spiritual oneness the amalgamation of individual soul or atman with the divine soul or paratman likes the line of he sleepers of Whitman

“I dream in my dream

All the dreams of the other dreamers

And I have become the other dreamers.”

Das’s sensitive soul always longs for that divine embrace dissatisfied and rejected from the physical one her spiritual migration from lust and hunger lies in the understanding that amalgamation of body and soul makes one complete. Her Radha becomes so absolved and intimate with Lord Krishna that she goes to merge with him Das says clearly in ‘My Story’, ‘the only relationship that is permanent is the love which we form with God my mate, he should come to me in myriad shapes in many shapes shall I surrender I shall be fondled by him I shall be betrayed by him I shall pass through all the pathways of this world condemning none understanding alone the and became part of him in ‘Ghanshaym’.

The line like ‘you have like a koel built your nest in the arbour of my heart.” The whirlpool of sex nudity and the story of the sad woman body being beaten behind the closed door is expulsed from the horizon and tranquility sets in”.

The sternness of poetic persona of kamala das exhibits both in the love sex and also in the spiritual revelation the persona identifies herself whether in dialogue of love and whether in spiritual identification is unique in itself she is the modern eve in disobeying the male biased universe like the eve, our first mother and also acting the role of benign comforter in placing poetry in the discourse of spiritual revelation.