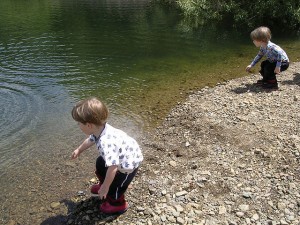 In the luminescent array of maudlin childhood memories, as I dreamt of her, I saw Radhika and me throwing stones that would splatter against the chest of the mighty Brahmaputra. On weekends when I landed up calling aunty Mira’s door bell, Radhika would come running to answer the door, knowing it’s me. Mira aunty would pull over her daughter, her bathing suit and let us run as fast as we could to the banks of the river. There I with my best friend would enjoy our own banal solitude by looking at the setting sun and the waves like golden gossamer strings would crawl upon our feet and leave us back again. We would make castles out of sands on the banks and name it with a different name every other weekend, as waves would crash down our castles till we came the next time. And when all the work’s done, we would sit side by side, admiring our creation and dig up stones, to throw them over into the river. We would dream of travelling through the river and swimming across to distant lands, discover treasure troves of the past and un-discover ourselves in an existential reverie. Perhaps, we really would have been successful in realizing our dreams if Poseidon – the water god, would never have taken his daughter back to him.

Radhika was eight only when she left for the river in the spirit of adventure, a reckless child always, never to return. I kept shouting helplessly from the banks, as the waters devoured her. I was too young to comprehend as well as realize that my best friend left me forever. She drowned and I fainted at the banks.

Years later, now when I see aunty Mira pulling prams in her crèche; babies that are oblivious to all her mental upshots as well as to their own physical melting pot. Cries, wailing of the babies finally break the spell almost always and that brings her back to the cast of her rational corporality, and me from my dream.

She had been having these episodes of fading into such notional limbos from quite some time and was under the care of Maa, her best friend. After Vrishav Uncle left her for another woman, more so accusing his wife of having killed their daughter (whom he seldom cared for, perhaps he just needed an excuse); aunty Mira chose to soak her silken black hair on lonely Sundays under the sun, fondling Radhika’s photo-frame and her platinum locket, the only thing the waves decided to return back to the banks. Maa however took the founding step of bringing her to her place and release the darkness of her past, which later I brought to completion.

After my tenth birthday, she took over her first transmogrification, the second after when I decided to change my name to Radhika, with the consent of Maa, where she too named herself as my “Second Mother”. She cuddled, showered and enriched me with her immense love and I too reciprocated in all divided forms between Maa and her. Yet, as with every woman, her latent desire of the forbidden fruit, the lost child and a child of her own kept making its mouth all the way larger as I grew up into a girl.

On my sixteenth birthday she expressed to Maa that she had been fighting these years a virtual battle for adopting a child, but failing every time in disappointment. Maa could never empathize; I knew it, because she never went through the same tin plague of being childless, as Mira Aunty did. In her most pretentious composure Maa patted her back and encouraged her, repeating the same old lines, “My daughter is as much yours Mira, as she is mine. Look, she has even named herself Radhika and has always been attempting to fulfil your daughter’s place.”

It is not that I disliked having her as my Second Mother, but I wanted her to be The First, for someone who didn’t have any.

One month later, aunty Mira in her widest of smiles walked into our drawing room, hugging me and whispering into my ears – “Our dream came true Radhika. We are getting a brother for you.” My happiness knew no bounds that day. I had never seen aunty Mira smiling in such delight. Every crackle of laughter that she shared with Maa seemed to bespeak the joy of a final ataraxia. Her third moulting was on its way.

She was going to pay this huge amount of two lakhs to the local orphanage, the price for transforming her long cherished dream into a reality she had been longing to live. The orphanage was located at the Shukleshwar ghat near the river Brahmaputra. She took the road by the Nehru stadium and was amazed to see this babble of the urban sprawl crowding and making it all the messier for the passer-byes. She noticed her surroundings. It was the Ulubari slum, Guwahati.

She pushed in herself to feed her inquisitiveness. A child of around nine years had put up a banner outside an old tethered hut that read “Child for Sale” in a bid to raise fund for his mother’s liver transplant.

Aunty Mira couldn’t soak it in this time. She went near the child and asked the ugly black man standing by his side, to explain the situation. Expressionless, the ugly man gave her all the details he could.

Pinu, the small fatherless boy, had sold all the little valuables he and his mother possessed in an attempt to save her life, and now, his only chance of saving his mother’s life was to offer himself now.

Savita, his mother, was told at the Guwahati Medical College and Hospital, that she needed a liver transplant. A doctor there said the procedure would cost up to rupees two lakhs. Since then it has been an unending race for Pinu to arrange the funds, but with all his efforts turning to be futile.

Aunty Mira felt an inferno flaming immense intolerable pain. She had to take a decision now…either be the first for the one waiting for her at the orphanage or save the only One, the first and the last.

The weight was unbearable now. If she wasted any more of her time juggling her way out, she would make it nowhere. Finally she carried the piece of paper to Pinu. She caressed his hair and, knelt down to wipe off the tears of his helplessness. She looked at his torn kurta, and couldn’t contain more of herself. The inferno grew and silent tears streamlined as she hugged him and closed her eyes—to see her lost child. She released him and handed over the check of rupees two lakhs As Pinu kept waiting for a response, she walked away with not a single backward glance fearing the unpredictability of her mind.

She came back home and invited me and Maa for dinner. Over the table Maa asked her about the new child, to be home in a few days time. Aunty Mira smiled under the delectation of her own complacence, held my hands across the table and replied:

“Be it First or Second, whichever I may be, the truth is I was a mother and I have chosen to be a Mother and I need not re-incarnate myself in any other form. I have dropped the idea.”

Maa kept quiet and took a small bite of the caramel custard that tasted so very sweet, the redolence still clinging onto me. Maybe it was infused with the taste of the First and the love of the Second. This is one thing I always wonder and which I may never know – the perplexity of a Mother’s Love – First or Second.

What remained inside me were only the charred remains of my long lost friend, who had unlocked me from my ghost of loneliness for a few days and left me indebted in many ways to her mother, My Second Mother.

Author’s Bio: Dr. Gaurav Deka has done his MBBS from Guwahati, Medical College, Assam, India. He did his creative writing from Brighton University, U.K. He has previously written for journals like Muse India and Fried Eye Magazine. He has also written extensively on several social issues issues in Seven Sisters Post and Eclectic Times, Sentinel, Assam Tribune, Eastern Chronicles and national dailies like The Times of India and The Hindu. He has also written North-east India’s first e-book “Madrigal- A Song for several voices” to be released in November 2012.