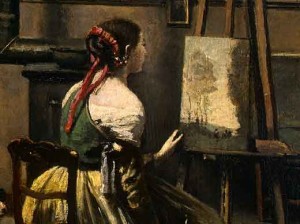 Mrs.Gupta turned left to the gallery and saw Seema, her only daughter who died last year. A painting brush in her hand was about to fell on the canvas destroying much labored painting. It took her four hours to complete the work. One of the best creations I have done in recent past, just a few minutes ago she had patted herself and suddenly everything changed.

The gallery of the hall which used to open in the society ground has become a terror spot for her. Almost a year has passed; Mrs. Gupta did not enter this gallery to observe sun set which was her regular habit previously. Every morning and evening she could enjoyed the generosity of the sun from the galleries of different rooms. Specially, in the evening she had long leisure time. So she could sit in the gallery and could enjoy a cup of tea while observing sun set.

But one day an incidence took place in her life that changed her routine. Seema killed herself after jumping from this gallery. Their flat was on sixth floor, so one can imagine what could have happened with anybody if he fell from that hieght. Seema was dead on the spot. Her head was burst like a coconut when it crashed against compound wall of the apartment.

Stunned parents could not speak or cry for some time, even investigating police officer could not bring out any reason of their daughter’s death from them. Why should she commit suicide? This was the only question raised out in their mind again and again, but it remained unanswered. Two days later, a doctor came to them with a post -mortem report and declared in secret that their daughter was pregnant. It was another jerk to them.

They requested doctor not to disclose this fact which was accepted by him and deleted the statement from the report. In this way, the truth was burnt with the corpse of Seema and it did not open to the world, but it remains alive in the mind of Mr. and Mrs. Gupta permanently which was very painful to them. ‘How could our daughter do this?’ the question haunted everyday. The realization of Seema’s pregnancy was not less painful than her death. They wanted to forget it, but as they tried to avoid this thought, it used to be erupted forcefully in their mind, but they did not discuss the issue openly.

Another question that left them sleepless was who was ‘he’? Many names related to Seema came in their mind, but they could not fix any one of them. Once Mrs.Gupta decided to investigate secretly and she enquired indirectly to Seema’s friends whether any man was there in her connection or had she referred any one about any such thing happened with her. She took extreme care that any kind of suspicion should not create out of her enquiry. But unfortunately all her endeavors went fruitless; she could not generate any information from anybody. Then she left this exercise, but that heart gnawing grief was continued with her. There was no chance to get escaped from it.

It becomes major cause of deterioration of her health. By nature Mrs.Gupta was reclusive kind of person and Seema’s death nearly threw her in the dark cave of loneliness. She had closed herself in the house and she was not willing to come out this self-prepared prison. Mr. Gupta took it seriously. He did not want any second loss. He tried to spend with her as much time as possible to him. His encouragement to indulge her in her old hobby of painting proved fruitful up to some extent. At least Mr.Gupta felt so. But his sigh of relief proved temporary. In the company of canvas and brush, Mrs.Gupta become more reticent and hardly utters anything. Mr.Gupta had also encouraged her to join social groups in their area, but she was reluctant to go outside the home. Every evening he observed her swelled eyes, he could easily guess that she must have spent her day long time in weeping. He did not comment on that but had pursued her to work more and more on canvas.

Ever nuke and corner of the house was filled with the memories of Seema. Highly energetic and ever happy-a-doll Seema was the subject of pride to Gupta couple. Her versatility was also the issue of others envy. Apart from sports and dance, Seema was known for her paintings in the artist fraternity of the city. It was a legacy of her maternal side. Her grandfather was a renowned artist of his time, and her mother was also known for her special skill in abstract painting. In her early childhood, Mrs.Gupta observed Seema’s interest in the painting and she encouraged her on that line. Seema scored impressively in her higher secondary examination and could able to get an admission for medical or engineering easily. But she expressed her willingness to join an art college which was supported by Gupta couple. Seema had also shown her excellence through a brush and surprised critics.Gradually, she was named in the city’s art circle as an emerging talent in the painting. She had started winning awards and her paintings had great demand in exhibitions. Mr. and Mrs.Gupta were immensely happy that their only child was a rising star in her field.

And one day everything changed.

One day Mr.Gupta was shocked when he returned home and enters the hall. Mrs. Gupta had completed a painting after day long labor in which a girl appeared on the canvas that resembled Seema. But it seemed that Mrs.Gupta did not notice it. He could not stop himself and asked her ‘What have you drawn today?’

‘Nothing special. A girl sitting under the tree.’Mrs.Gupta replied plainly.

‘Humm.any girl.’ No change in her attitude or tone.

‘No, you might have not noticed, Rekha. Come here and look at that painting from this distance.’

A question mark appeared on her face and she followed him and observed the painting from a certain distance that made her surprised. Without any reaction, she just saw Mr.Gupta.

‘Yes, that’s what I want to say, Rekha. You have drawn nobody but Seema and how perfect this .Just like a photograph is.’

Mrs.Gupta was also surprised, but she only said that, ‘I was not intended to do so…’

But Mr.Gupta could perfectly understand her mental state.

Today, when she was trying to keep herself busy in painting, she saw Seema in the gallery weeping. Was it a hallucination? Shocked Mrs.Gupta asked herself. Seema was trying to say something, she felt so. In response, Mrs.Gupta also tried hard to utter something, by calling as loudly as possible her, ‘Seema, Seema’, but she herself felt that she was not audible; words were not ready turning into sound. Sweat gathered across her temple, heart started thumping. She felt entire hall was moving around her and things were not in their place. A lump of fear gathered in her throat which chocked her breath for a while. It brought an instant fatigue to her and she collapsed back on the sofa.