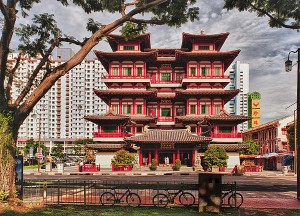 In 1980, Ven. Cakkapala, abbot of the renowned Bandula monastery in Mrauk-U, Myanmar, resolved together with five male devotees to climb the Bagan Hill at Mrauk-U to restore a collapsed stupa and a large statue of the Buddha. While clearing up the debris, they discovered a Tooth of the Buddha within a stupa of pure gold, and also found various other relics of the Buddha. The discovery was not made known publicly.

In mid-January 2001, members of the Preparatory Committee for the Bandula Monastery were preparing to build a Buddhist hall and a two-storey Exhibition Hall for Ancient Buddhist Cultural Relics. Faced with great financial difficulties , they appealed to Ven. Shi Fazhao for money. Moved by the Committee’s spirit of commitment to Buddhism, Ven. Shi Fazhao gladly agreed to their request.

In mid-August 2001, the Preparatory Committee escorted Ven. Shi Fazhao and his devotees to pay reverence to the Buddha Tooth Relic (discovered more than 200 years) at the Bandula Monastery, and to meet the abbot Ven. Cakkapala. The two eminent monks felt close to each other right from the start, such that they shared extensively with each other their experiences in furthering the Dharma. In early 2002, Ven. Cakkapala came to Singapore, Malaysia and Thailand for a visit on Ven. Shi Fazhao’s invitation. As he visited both the Golden Pagoda Buddhist Temple and Metta Welfare Association (founded by Ven. Shi Fazhao), he came to the profound understanding that the compassion of this friend of his, extended beyond just helping to restore stupas in Myanmar.

On August 4, 2002, Ven. Cakkapala decided to hand over the Buddha Tooth Relic (which he had reverently enshrined for 22 years) to Ven. Shi Fazhao to be safeguarded.

Buddha Tooth Relic Temple is a newly built temple in Singapore’s Chinatown. The temple was built to house the relics of the Buddha and was considered as a living cultural monument inspired by the golden age of Buddhism in China during the Tang Dynasty. It was considered as the strongest empire in the 8th century and when Buddhism really flourished.

Ground breaking of the Buddha Tooth Relic Temple took place on 13 March, 2005. The temple, which has five levels and a basement, costs about S$60 million and was completed in early 2007. The temple is dedicated to the Maitreya Buddha, that is to say, the Buddha of the Future. The most significant feature of the temple is the two-meter solid gold stupa.

The main entrance to the Buddha Tooth Relic Temple is at South Bridge Road, through the Mountain Gate, which ushers one into tranquility of the temple. The gate has three doors framed by massive columns of balau timber. To the left is the Drum Tower while on the right is the Bell Tower. Next to the Bell Tower is the Offering Shop, where devotees can purchase worship paraphernalia. The main shrine of the Buddha Tooth Relic Temple is the one hundred Dragons Hall. It is located immediately beyond the courtyard on the ground level. The main prayer hall has vibrant warm colors and the walls are filled with Buddhas Statues said to be around a hundred. The hall has a soaring twenty seven feet high ceiling, and enshrined within is the image of the Maitreya Buddha, carved of wood in Tang Dynasty style. Behind the one hundred Dragons Hall is another chamber dedicated to the Bodhisattva Avalokitesvara (believed to perceive the world’s lamentations) or the Universal Wisdom Hall often described as the Kuan Yin or goddess of mercy. It sits on an elaborate lotus throne. The walls here are filled with smaller and intricate statues along with the other Buddhist Statues.

Just like the Hindu deity Ganesha who has many arms, this Buddhist saint’s six arms represent the following: with his first right hand supporting the head, pondering over the suffering of mankind, while the second right hand holding a pearl symbolizes the power to fulfill any sentient wish, the third right hand holding a string of prayer beads symbolizes the promise to end all sentient sufferings; on the left, the first hand is pressing the ground to signify granting the wishes of mankind with a firm heart, while the second hand holding a lotus flower symbolises the purification of human deeds. Lastly, the third hand is holding a Dharma wheel, which symbolizes the spreading of Dharma. Along the sides are the zodiac protectors, surrounded by smaller statues of Cintamanicakra Avalokitesvara.

The third floor is where the Sacred Buddha Relics Chamber is located. Each culture interprets the Buddha images differently. Photography is strictly forbidden here. The relics come in different colors and appearances. The biggest are golden, and are relics that came from the flesh. Housed here are relics of eminent monks. In addition to the Sacred Relics Chamber, also on the third floor is Samantabhadra Hall, which exhibits about 300 Buddhist artefacts from all three branches of Buddhism, and originated from many different countries including Pakistan, Korea, Myanmar, and others.

This is where the Sacred Light Hall is located. In this hall is the Sacred Buddha Tooth Relic Chamber, which will be the repository of the sacred Buddha tooth. It is the 2-meter tall solid gold stupa that weighs four hundred and twenty kilograms. The gold was donated by the devotees. The stupa is sheltered by a gold canopy while the floor of the chamber is lined with gold tiles. Only the monks will have access to the inner chamber to conduct ceremonies. Visitors will however be able to observe the rites from the viewing gallery. The chamber curtain is raised twice a day, at 9:00 am to 12:00 noon and again at 3:00 pm to 6:00 pm, so that visitors can see inside the chamber when the monks – the Sangha – perform their blessing ceremony. The roof top has a nice garden perfect for relaxing after a tour. It is enclosed so the views outside is hard to see unless you peep in through the fence. At the center of the garden is the Vairocana Buddha Prayer Wheel Pagoda. The walls inside this Pagoda is impressively covered with 10,000 miniature Buddha images.