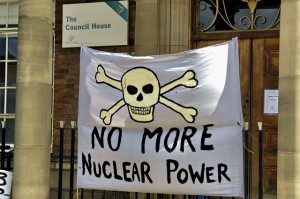 It is really unfortunate to see the trivial comments of the politicians of our country on Nuclear Power Projects. Minister for Electricity, Government of Kerala, Sri. Aryadan Muhammed commented that Tamilnadu has no right to demand the entire quantity of power to be generated at Koodamkulam Nuclear Power Projects. He should have changed his sentence as “Tamilnadu has no right to come up with a nuclear project which will destroy mankind”. Now it seems crystal clear, why UDF Govt. was dump on the Koodamkulam issue. But they prove to be cunning to come up with the green card to the Plant in the hike time of announcing load shedding in the State. Jayalalitha, the Tamilnadu Chief minister who flag off the project may be suspected for the third trade off with the Central Govt. as she faces a CBI investigation for amassment of wealth disproportionate to income.

Kerala Government, Electricity Minister may not be updated with the problems of nuclear plant. He might not seen the fuming Fukushima. The radiation effect of the Fukushima disaster was more than 250 kms, where he sit in the office which is just 60 kms away from the plant site. The radiation do not follow the divine traffic rules and road ways to reach his ‘air conditioned’ office at Thiruvananthapuram’.

People of Koodamkulam has been protesting the Project from 1988. The nations around the globe including Germany, Italy and Japan abandon nuclear energy and switch over to other means of power generation. America and Russia who voyage to establish nuclear power round the globe had decided not to start one in their land. Then why the leaders of the world’s largest democratic nation blindly behind the project?

Ukraine, boasted on their efficiency to had evacuated 3,50,000 people in 36 hours after the Chernobyl disaster. But the studies after 10 years reveal pathetically that the victims counts more than 10 lakhs. Now too many die of cancer and genetically disorders. The plant constructing at Koodamkulam is none other than the same technology adopted at Chernobyl but in a newly designed bottle!.

The Nuclear Power Corporation have no clear answers for many questions on the Project. Either they answer it with ‘No’ or a witty answer ‘cannot reveal due to security reasons’. At the same time they fail to ensure many safety measures which are mandatory to a Project.

They don’t had sorted out the problem of availability of adequate fresh water for cooling nuclear fuels rods in the plant. They don’t have any specific answer on the safety measures of the plant.

They don’t have scientific promise for better waste management of the nuclear plant as the present methods could only ensure a safe disposal of only 3000 years. But the truth is that the half life of many nuclear waste is upto 10,000 years. They don’t have any answer for the the health hazards by radiation. No technology or men in the world can predict that Koodamkulam is a earthquake/tsunami free zone.

UPA Govt and Tamilnadu Govt is deaf to hear the innocent protest for the right to live by the people of Koodamkulam. Article 21 of Indian Constitution promises the right to healthy living. If so, the advocates of nuclear power projects violates constitution of India.

Rise to the circumstance,

We need to live our life safely..

we need to ensure our children a better living..

We ought to pass on the land to next generation …