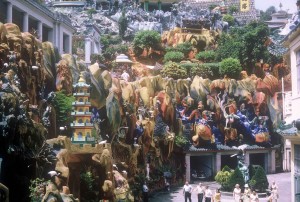 Haw Par Villa, also known as the Tiger Balm Gardens, has to be one of the weirdest tourist spots you can find in Southeast Asia, and the weirdest in Singapore. It is a Chinese mythological theme park in Singapore, located along the Pasir Panjang Road. Haw Par Villa, formerly called Tiger Balm Gardens, was originally constructed in 1937 by brothers Aw Boon Haw and Aw Boon Par the developers of Tiger Balm. The site was purchased by Aw in 1935. The Aw family eventually sold the Gardens to the Singapore Tourism Board in 1979.

In English, Haw Par Villa stands for the Villa of the Tiger and the Leopard. The park was renamed Haw Par Villa in 1985 and re-opened in 1990, when it was converted into an amusement park and promoted with the name “Dragon World”, with many of the statues and scenes replaced with fairground rides.

Aw Boon Haw then created an entertainment park to teach and preserve Chinese values.  The park’s colorful collection of over one thousand statues and one hundred and fifty giant tableaux centered around Chinese folklore, legends, history, and Confucian ideology.  Morality tales included classic battles between good and evil and tributes to Chinese cultural heroes such as the famous pugilist Wu Song, who tamed a ferocious tiger with his bare hands. The attractions include statues of the Laughing Buddha and the Goddess of Mercy, as well as dioramas of scenes from Journey to the West.

The Attractions in the park include the Scowling 7,000-kg gorilla, a monstrous sumo wrestler, The Statue of Liberty, The Ten Courts of Hell, with gruesome depictions of hell in Chinese mythology, all set in a 60 meter-long trail of a Dragon. The other attractions include Water Gardens and live fishes, Thai Dancers, Panda, Ostrich and the Koala Bear.

It also has ‘The Jade House’ – This is a new addition to Haw Par Villa. It displays a wide collection of Jades that Aw Family has collected over the years. This ‘Jade House’ is in Haw Par Villa, a short distance away from the main entrance. There is a token admission charge into The Jade House. It is open daily. There is also a ‘Tiger Car’ – This is also a new attraction. It’s a vintage car dressed up to look like a tiger. It’s a replica of the ‘Tiger Car’ that the late Mr. Aw Boon Haw owned. Viewing the ‘Tiger Car’ at the ‘Garage’ in Haw Par Villa is free. The ‘Garage’ is open daily.

Like the Hindu Religion the Chinese mythology also espouses in the theory of rebirth and results of virtuous and vile deeds that are rewarded or penalized severely in the ten courts of hell, where a soul must pass through the ten courts of judgment, before being allowed into heaven, and Haw Par Villa has very detailed representations of these trials.

In the first Court Of Hell, King Oinguang conducts preliminary trials and each prisoner is judged according to his deeds in his past life. The ‘good’ are distinguished from the ‘evil’ and the King recommends appropriate reward or punishment. Punishment is then carried out in various courts. Those with virtuous conduct in the past life will be led over the ‘Golden Bridge’ to reach Paradise. Those whose past good deeds outweigh crimes committed will be sent to the ‘Silver Bridge’ to reach Paradise. Those who were evil doers in their past lives will be sent before the ‘Mirror of Retribution’ and then taken to a subsequent court of hell to be punished.

The second court of hell was governed by King Chujiang. Those who inflict physical injury and are robbers are thrown into the volcanic pilt. For corruption, stealing and gambling the penalty is freezing them into the blocks of ice. Last but not the least, in this court, prostitutes are thrown into a pool of blood and are drowned.

In the third court of hell ruled by King Songdi, those who were ungrateful, showed disrespect to elders and escaped from prison in their past lives, their hearts were cut out while those who were drug addicts, tomb robbers and those who urged into crime and social unrest, they were tied to red hot copper pillar and grilled.

The fourth court of hell ruled by King Wuguan, the tax dodgers and those who refused to pay rent and business fraud were pounded by stone mullet. For the crime of disobedience to one’s siblings and lack of filial piety led one to be grounded by a large stone. This accommodates those who were wronged and driven to death. They would be asked to view how their enemies receive retribution. They would then be judged on their past deeds and given an appropriate punishment.

King Yanluo who governed the fifth court of hell severely penalized those who plotted another’s death for his property or money and money lenders with exorbitant interest rates were thrown into a hill of knives. The Viewing Home Tower is for the evil doers to see how their relatives and family are suffering as a result of their misdemeanor.

In the sixth court of hell those with crimes of cheating, cursing, and abducting others were thrown onto a tree of knives. Those who misused books, possessed pornographic material, broke written rules and regulations and wasted food their bodies were sawn into two. This court was reined by King Piencheng. King Taishan, the ruler of the seventh court of hell penalized rumor mongers and those who sowed discord among family members by pulling their tongues out. While rapists and those who drove someone to their death were thrown into a wok of boiling oil.

In the eighth court of hell dominated by King Dushi those who lacked filial obedience, caused trouble for parents or family members and cheated during the examinations their intestines and organs were pulled out. And those who harmed others for one own’s benefit their bodies were brutally dismembered.

King Pingdeng, who reined the ninth court of hell chopped off the head and arms of robbers, murderers and rapists and crushed them under boulders, those who neglected the young and the old.

In King Zhuanglun’s tenth court of hell there is the ‘Wheel of Reincarnation’ and the ‘Pavilion of Forgetfulness’.

After serving their sentences, prisoners arrive at the tenth court where King  Zhuanglun passes final judgment. The prisoners are then brought to the ‘Pavilion of Forgetfulness’ where an old lady ‘Men Po’ gives them a cup of magic tea which on drinking, makes them forget their past lives.

They will then go through the ‘Wheel of Reincarnation’. Depending on the prisoner’s past life he would be reborn either as a human or an animal. Some would be reborn into a life of ease and comfort while others into sorrow and suffering.

After they have drunk the magic tea, the sinners leave the Ten Courts of Hell via one of the six paths of the Wheel of Reincarnation or Samsara.

Visiting the ‘Haw Par Villa’ one realizes the worth of virtuous deeds and the vile ones altogether. Poetic justice prevails even in the Chinese mythology and they are very God fearing people. Past lives, Courts of Hell, Soul Transmigration these theories transports one to a metaphysical level where science ends and religion spreads its golden rays.