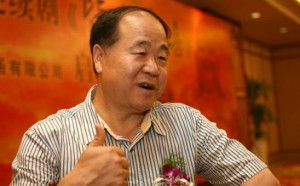 Chinese author Mo Yan, becomes the first Chinese citizen ever to win the Nobel prize in literature.  He was chosen as the 2012 recipient for works with qualities of “hallucinatory realism” that mixes folk tales, history and the contemporary. Born in 1955 to parents who were farmers, Mo Yan – a pseudonym for Guan Moye; the pen name means “don’t speak” – grew up in Gaomi in Shandong province in north-eastern China. The Cultural Revolution forced him to leave school at 12, and he went to work in the fields, completing his education in the army. The backdrops for his various works have included the 1911 revolution that toppled China’s last imperial dynasty, Japan’s brutal wartime invasion, newly Communist China’s failed land-reform policies of the 1950s and the madness of Mao Zedong’s 1966-76 Cultural Revolution. The author’s works include Red Sorgum , The Garlic Ballads , Life and Death Are Wearing Me Out and Change among others. Through a mixture of fantasy and reality, historical and social perspectives, Mo Yan has created a world reminiscent in its complexity of those in the writings of William Faulkner and Gabriel García Márquez, at the same time finding a departure point in old Chinese literature and in oral tradition. In addition to his novels, Mo Yan has published many short stories and essays on various topics, and despite his social criticism is seen in his homeland as one of the foremost contemporary authors. Readers in India eager to acquaint themselves with his writings will have to wait for a while to reach those in Indian markets.