My experiments with truth – Deepayan Bhadra 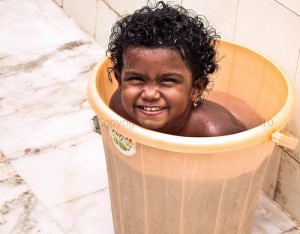 It was apprehension. I stepped into the building, unsure of how would I be received. I was yet to tread this unknown path. I needed to talk to the generous person, who had willingly provided them a ‘life’. He suggested that I start the very next day. I decided to keep an upbeat mood. I wasn’t able to judge what demeanor I was expected to keep. An over-the-top approach might clearly indicate that I wasn’t fit for what I intended to achieve; yet a serious stand might back-fire. They would perceive it as sympathy rather than genuine concern. Soon, they started pouring in. There were ten or fifteen of them. Paradoxically, most of them were elder to me. They weren’t as different as we assume them to be ( ignorant as we are of the harsher realities ).

As it is with all new ventures, my first day was a fiasco, so to say. I had no idea where to begin. Lack of any idea of their basic knowledge didn’t help either. I chose Maths, my eternal favorite. It was not long before I realized that I had committed a mistake. You need basic reasoning powers to solve the simplest of questions. They were not up for it. I decided on four days a week, Tuesdays to Fridays. I didn’t want them to lose interest or be fed up with this new intruder. They needed space to adjust to this new development.

In course of time, I became more methodical. As I got to know them better, I felt I needed to make them aware of general knowledge. It shocked me no ends to see that they couldn’t even name their motherland. That was the page-turner, so to say. I realized that they needed love and kindness, perhaps even more than basic knowledge. They were more than happy to spend some time with me, who was virtually a window to the outside world for them. I would invite each of them to my desk and ask them to share their daily happenings. In turn, I would make them aware of the latest developments in the most lucid manner possible.

Almost a month had passed. I don’t know how successful have I been, but what started out as a so-called ‘NGO internship’ has been an eye-opener for me. You truly realize that life indeed isn’t a bed of roses. Life isn’t all about those swanky malls or cool hangouts. There is a different world out there, a world that seeks only a meager portion of our time to make it a better place to live. I am pretty sure this association will continue in some form or the other. Here, I urge each Gen-Y to devote some time to societal good. It won’t be a decision regretted, believe me, rather rewarding.