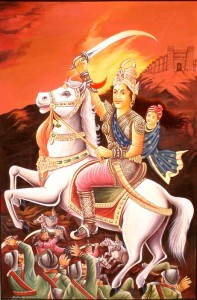 The canons of revolt were still charging in Crimea, when India also erupted with revolt. British commander Colin Campbell got the order of taking charge of Indian Army while in Crimea itself. He was still basking in the glory of defeating the super power Russia, fortified by the joint forces of France, Turkey and Sardinia. Colin Campbell had read about India in various articles published in The Punch. On the basis of his half-baked knowledge about India, he could perceive Indians only as uncivilized brutes. He found it hard to understand how can Indians, mired in witchcraft and religious superstitions and scattered in small tribal-like estates, become a cause of concern for British Monarchy. Campbell readily complied with the order and commanded his army to board the battleship and set out towards Indian shores.

In India, however, public was as restless as a lion in cage. The web of slavery developed holes at places like Delhi, Lucknow, Kanpur, Allahabad, Jhansi and Ara. Numerous revolutionaries saw ray of hope filtering through these holes and girdled their loins to eradicate the web of servility. But, it was not a battle of the equals. The British armies gathered from all-over the world were fiercely trampling the revolt, as they were friskily guided by the orders of their Commanders sent through electric telegram. The gigantic stream driven engines of newly established Indian Railway were carrying loads of British soldiers from one place to the other. These immensely powerful steam engines neither used to get tired like the weak horses of rebels nor were they dependent on the quick diminishing grass of the famine-stricken North India. In fact, Indian Railway played an instrumental role in chalking out with coal the defeat of the India revolutionaries, who lost their voice in the turmoil of steam horses running on iron tracks. The battle of 1857 had become a battle between tradition and science; and since ages science has overpowered tradition. Hence, victory to the British was a foregone conclusion.

This, however, was not as simple as was thought. The flames of revolt in Jhansi were sky-high. British commander Sir Hugh Rose had hardly sieged the Fort of Jhansi that he was attacked by Tantiya Tope from the other side. Tantiya Tope’s forces had fled from Kanpur after the defeat of Nana Saheb and had decided to camp in Jhansi. Sir Hugh Rose with his military acumen and diplomatic foresight quickly perceived that Jhansi might become the epicentre of Indian freedom movement, if he loses the battle over here. He, therefore, planned to mount his canons on the parapet of a nearby temple in order to demolish the Fort. As soon as the canons opened fire there was mayhem all around. Eventually, Rani Laxmibai, the Indian Joan of Arc, came to know of this.

She, like a fuming lioness, reached her cannoneer Gaus Mohammad and accosted him, “Why the ever-charging canon “Kadak Bijli” (harsh lightening) is lying silent? Has Gaus Mohammad lost his hand or else has turned a traitor?” Gaus Mohammad’s eyes turned red with anger, yet he controlled himself and answered that neither he had become a traitor nor had he lost his hands. Being a faithful Muslim he cannot play with the repute of his motherland. For a chaste Mohammedan each and every temple of India is a place of deference if not of reverence. How would it go in the pages of history? That the cannoneer of Jhansi, being a Muslim, charged at a Hindu temple. He despaired that not only Jhansi but even India had lost its battle.

The face of Laxmibai turned crimson in ire. She ordered her soldiers to bring a burning torch and put cartridge in the canon. Trembling furiously while lightening the canon she exclaimed, “The war of Indian freedom can be terminated only after demolishing Jhansi, and as long as I am alive, I won’t let Jhansi fall down. The British presume that they will overpower religiously grounded Indians by using a temple as a shield. But today they will come to know that for every Indian freedom is the highest religion. If a Muslim cannot attack a temple, I being a chaste Hindu and daughter of a Brahmin will do it and shall see who dares ostracise me from Hinduism.”

When the first canon fire exploded on the temple, Sir Hugh Rose was stunned. He sent a telegram to Colin Campbell that his last strategy to get control over Jhansi had also fallen flat. Consequently, numerous British soldiers were sent to Jhansi through steam engine driven trains. Campbell gave strict orders that this fierce lioness, who vouched to spread the religion of freedom across India should be captured in Jhansi itself.

But the birds of freedom are hard to catch. Rani Laxmibai tied her infant adopted son on her back and pierced through enemy army to move towards Kalpi in the company of Tantiya Tope. Her horse was galloping at the speed of forty miles per hour. The British had already lost Kalpi. But Colin Campbell though sitting in Calcutta was keeping a close watch over each and every move of Laxmibai. He immediately sent British army to Kalpi, but by that time Laxmibai advanced towards Gwalior. In her group only Tantiya Tope and a handful of soldiers were left. But few Indian troops in British army turned rebel and the King of Gwalior who was supporting the British turned truant.

However this last endeavour for gaining freedom also fell flat. This time Laxmibai could not penetrate through the dense British army, and her desire to spread the message of freedom in South India buried in her heart. But even before her death, Laxmibai killed two British soldiers who were following her. She, unfortunately, could not spot the third soldier who hid himself behind the bushes and opened fire on her. Her body, being wounded by flurry of bullets, hung over the back of her horse. The helpless animal couldn’t do anything but shed tears on the plight of his mistress. He took the lifeless body of Rani to a distant hut that had been put to fire by some plunderer. That tattered burning hut that had been orphaned like its nation was still ablaze waiting for its worthy daughter Laxmi.