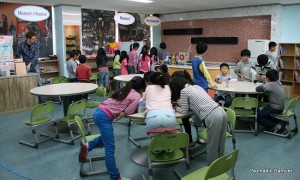 The challenge today is in teaching English for the Generation Y. Let us first look at the term ‘Generation Y’. Obviously it refers to the generation next to generation X. But its characteristics vary based on the social and economic conditions of a country. Generation Y is plugged –in 24×7. It is tech –savvy and relies on technology to perform all its tasks. Generation Y, also known as the Millennial Generation, prefers to communicate through e-mail and text messaging rather than face to face contact. The 70 odd million of this generation are gadget- friendly and are seen mostly with their laptops, iPods, or mobiles. They are influenced by the high speed internet, social networking and global concerns. Generation Y is more individualistic than earlier generations and seeks autonomy in their opinions and behavior. They are skilled and multi tasking but many belonging to this generation get bored or frustrated if the information flow is poor or too slow. This paper is concerned about the results of text messaging, one such task of the present generation.

Text messaging has become a universal phenomenon. In India, mobiles have become an indispensible part of the present generations’ lifestyle. The younger generation would even live without food but not without mobiles. Text messaging is the most sought after mode of communication as it serves the typical Indian bashful attitude of the younger generation. Generation Y also comprises learners of English language who could also be first generation learners in some parts of rural India. Let us consider them as the target learners for whom English is a second language. Text messages that are sent through their mobiles are basically in English as most mobiles are manufactured in other countries. The user manuals given for instructions are also printed in a common language understood by many users. The learners, though they use the mobiles with ease, do not righteously follow the instructions given to them. But the gadget friendly generation uses this short message service to a large extent which is evident from the introduction of numerous booster packs by various service providers.

As texting or text messaging is the concern here the focus is made on the impact of it on the language used by the learners. The languages commonly used by the younger generation in Tamil Nadu are English and Tamil. Recently, Tamil has been introduced in some mobiles. The language part of the English text messages that are being sent by the learners of this generation is the area of analysis. The spellings of the words used in such texts are faulty. The short message service has been misconstrued as short forms of words by the users. There are some problems that arise out of such text messaging. They are fallacious functionally, grammatically and syntactically. They lead to confusions like wrong spellings, grammatically wrong sentence structures, transliterations, and language hybridization. Let us take each problem separately and analyze the cause and effect of it.

First let us consider the confusion caused by the use short forms of words. There are many commonly used short forms by many text message senders in common. The following is a list of abbreviations used in English text messages. (Source: Crystal, David (2008). Txtng: The Gr8 Db8. Oxford University Press)

The list is extensive. The words that are commonly used by the message senders are more confusing in nature. It hinders their language learning capacity. The learners, belonging to the rural set up might not clarify their doubts with other learned people because of their shyness. This results in learning the wrong spellings.

This is the same with sentence patterns too. The senders tend to leave out the vowels in order to be short and faster in sending their messages. The syntactic pattern of English language is also missing in writing nowadays. Thanks to the impact of text messaging.

The language of the region, in this case, Tamil, is mixed up with English as a result we have hybridization of languages. Some such words which are neither English nor Tamil are seen in the text messages.

‘collegula’ – in college, ‘nameukku’- in your name, cellukku- for your cell etc to name few.

These hybrid words too are typed without the vowels so that more number of words could be sent.

The next prominent issue is the transliteration of spoken words. For example, the Tamil words are as it is typed in English language. To quote a thoughtful message:

The message meant as a spoof on serious maxims is a transliteration. But it needs a thorough knowledge of the native language to comprehend the real essence of the message. There are confusions in it too since the stress pattern in Tamil language is totally different from English words.These confusions that occur while text messaging cause an obvious impediment for the learners. The younger generation who already struggle to learn English would be misguided by such practices and would start following those erroneous spellings if left unchecked.

The role of a teacher is very crucial in correcting such mistakes found among the Generation Y. This could be done effectively in the classroom itself by introducing new methodology. The problem has become so crucial that the teachers of late could observe words being misspelled in exam scripts too by the learners. This could lead to language incompetency on the learner’s part. It is a challenging situation for the Generation Y, which is otherwise street smart and mobile friendly – techno savvy.

To wean off such practices the teachers should encourage the learners to learn the correct spellings of the words. They could use the dictionary mode in their mobiles to get the correct spellings. The teacher could make the learners write a minimum of five lines a day with the use of dictionary and correct them. They could be given some home assignments which could include listening to news headlines and writing down them in the order. The problem areas could be identified and later rectified by following the traditional method of dictation tests also. This paper tries to identify some problematic zones in the seemingly innocuous practice and to bring about some solutions to the problems thus resulting from such a detrimental practice by the Generation Y.