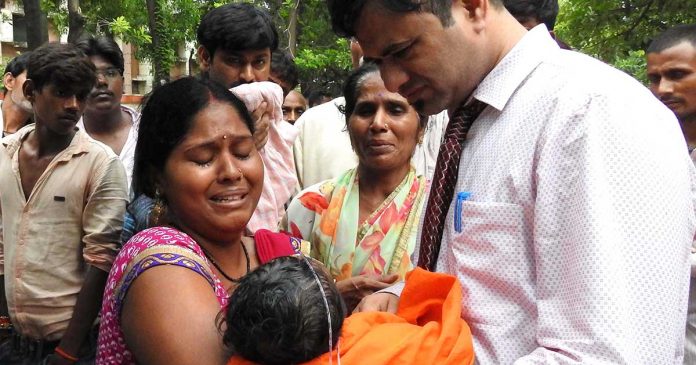 It is tragic to hear that more than 70 children died within a week in Gorakhpur’s Baba Raghav Das Medical College due to lack of oxygen supply in the emergency wards. The rate of deaths continued to increase every hour even after the situation reported worse by the media. The government failed to function properly to check the issue behind the tragedy. The reports say that the lack of oxygen supply in the hospital occurred as the dues were not paid on time to the supplier

The BJP government under the leadership of Yogi Adithyanath is under severe pressure after this incident. It is to be mentioned that this tragic incident happens in the constituency where Chief Minister Yogi Adithyanath represents in the Loksabha. The government denied the allegation and argues that the deaths are caused not due to the lack of oxygen supply but to various medical conditions.

“Deaths due to oxygen shortage would mean a despicable incident,” said the Chief Minister, adding the role of the oxygen vendor will be probed. Raids were conducted at a Lucknow-based firm that had stopped supply of oxygen to the hospital because previous bills were not paid.

Majority of the death reported from the Acute Encephalitis Syndrome and Japan Encephalitis treatment wards. The major reason for the spread of this deadly disease is lack of hygiene (the authorities say that majority of death are due to encephalitis not oxygen deficiency). It is the State’s responsibility to ensure a hygienic surrounding for a new born.

This tragic incidence happens in UP, where government launched ambulance service for cow and the people are threatened to face legal consequence if have killed a dog. No moral grounds will offer an escape to the Government as it happened due to its unpardonable negligence in providing basic needs even in a medical college. But authorities blame each other for the delay in payment. Also it increases the confusion of common man as the dead bodies are sent away without conducting autopsies. It is pointed out as the government’s witty try to hide the truth behind the incident.

The non-ruling political parties in UP criticised that the negligence happened as the Yogi’s government was busy with the action plan to reinforce ‘love for mother country’. They point out that the government is busy in observing the welfare of cow, anti- romeo squads, observing Independence Day celebrations in Madrasas etc. They question the ability of the government to provide the basic needs to the people.

In the midst of the tragedy, the doctor who acted quickly to take over the situation needs to be addressed. Dr. Khafeel Khan a paediatrician tried his maximum to save the lives of as many as children possible. Dr. Khafeel, Head of Encephalitis ward recognised the emergency situation by the deficiency of oxygen in the pipeline. The oxygen cylinder vendors are not ready to supply oxygen until the dues got paid. The pathetic situation could be managed only for 2 hours by the usage of emergency cylinders. He arranged few cylinders from nearby nursing home run by his friend. But it was not sufficient. He collected cylinders from other nearby places. On leaving the hospital he instructed junior doctors to handle emergency situation.  He also bought cylinders by cash payment from the vendors and paid the transportation fair to truck from his own pocket. His presence of mind and immediate response save the life of many.

Uttar Pradesh Chief Minister Yogi Adityanath addressed the death of over 30 infants in BRD medical college in Gorakhpur through a press conference in Lucknow. He said that the incident was very unfortunate and that he was glad that the media highlighted it. “I had started the fight against Encephalitis in Gorakhpur. My thoughts are with grieving families,” he said at the presser.  He also added that anyone found guilty will not be spared.

But it is ironical to hear, that Yogi Adithyanath suspended Dr. Khafeel for the kind action he took to save the lives of innocent children.

The BJP Government in Utter Pradesh denied the right to live to innocent 70 children. This serious human rights violation is not expected by a Government in a democratic country. The tragic incident had poured water on India’s enthusiastic history of child care and development.