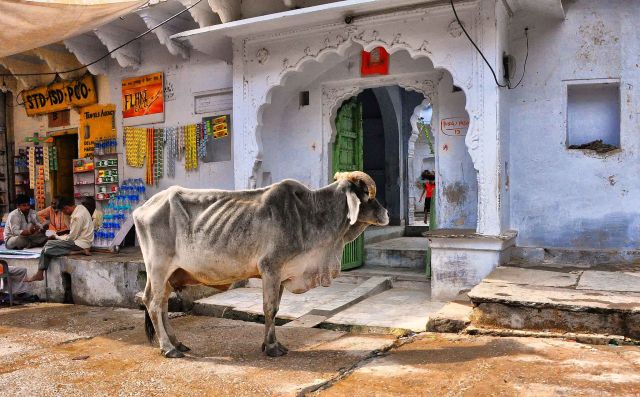 A BAG OF RICE

Pundit Vishwanath sang the last hymn in his high nasal voice, the bell gyrating in his left hand and the old book open at the appropriate page. The book was a much-thumbed paperback, its covers splattered with vermillion and it was rather thin for the deference it demanded of its readers. The spine had been stitched together at two places with thread. But all this did not affect the respect paid to it by its listeners and readers alike.

Pundit Vishwanath was a tall man, fair and averagely built. His hair had begun to grey but the ones sprouting from his ears were surprisingly jet black. His glasses sat low on his long, thin nose. The greying eyebrows shook time and again from the strain of reading the small print. His eyes were dark and moist from all the smoke from the little fire he had lit so ceremoniously at the beginning of the Puja.

‘Hold this in your right hand’, he commanded his host and benefactor thrusting a grain of rice at him.

Brijmohan Prajapati had invited him to bless the occasion of digging a well on his plot of land. The water table had fallen drastically and the pump from his existing well could not provide the water for his crops. A wealthy farmer, he had got an engineer from the city to oversee the digging of this new well that will have a submersible pump, the first in the village. The rains had failed and the village was one of many in the district on the verge of draught. Water was scarce and so were the basic commodities. The prices of food had skyrocketed and the cattle were dying for lack of fodder.

The small party was squatting under a tree and one could see a geometric shape traced by flour and turmeric powder on the ground. Pundit Vishwanath and Brijmohan sat on low planks with their heads covered with new towels.

‘Now pour a spoon of ghee in the fire’.

Brijmohan was appropriately reverential and said the correct words when prompted by the Pundit. To the accompaniment of mantras he put the sacrificial offerings into the fire whenever Vishwanath told him to. The smell of burning ghee and incense and fresh marigolds, bought from the city, filled the air. A bald dog, attracted by all this, came over and shooed by the children stood at a safe distance and watched.

The ceremony was over. A sharp and long blast from the conch shell and Vishwanath started to wrap the tattered book in the piece of red cloth and then tied it with the white thread carefully. He dipped the ring finger of his right in vermillion and made a mark between Brijmohan’s eyebrows. Brijmohan touched his feet. Vishwanath carefully picked the fruits, coconuts and the coins from the blessed square of dirt and put them in his satchel and then he looked Prajapati in the eye and cleared his throat. Brijmohan was a man of the world. He reached into his pocket.

The crows were negotiating in the peepul tree and the air crackled with their parleys. Under it men were breaking the gathering and were heading to their homes. The newly erected electric poles stared down at the gloom. The wires hung cold and empty; the electricity failed to show up again. The sun had just dipped behind the mango orchard burning the sky above it bright orange and pink. Children played in the street, their shrieks and laughter made the Pundit smile and look for his child. But she was not there. ‘Must be fussing about the goat’, he thought. Pundit Vishwanath left his sandals outside, crossed the dark veranda and put the sack of rice in the corner.

‘Give her something to eat. Then she won’t’, he said handing her the satchel. He sat down and removed his shirt. His daughter left the goat, Radha, and emptied the satchel while his wife brought him water.

‘I will get you apples when I go to the market next week’, he tried to cheer her up.

‘Any milk today?’, looking at the cow he asked his wife.

‘Hardly a litre. What will the poor creature do? We hardly have anything left to feed her’, she replied.

‘It is the God’s will. What can we mortals do?’

‘I have made rice and there is some curd. Wash and eat’.

The cow sat in her corner of the yard chewing cud. Not more than a skeleton. The kerosene lamp threw her shadow on the mud wall and highlighted the bones sticking out of her body. Most of the people in the village had sold their cattle to the slaughterhouse in the city for food grain. But Vishwanath was adamant. How could he sell his cow, the goddess he worshiped? As the drought worsened the money had started to lose value over grain. So he had begun to articulate his preference for rice or flour over crumpled currency notes and grimy coins to his hosts.

He sat down on the plank Rama had put for him, cupped his right hand and poured water in it. With his eyes closed he muttered a mantra and drew a circle around his plate with the water in his hand and threw the rest above his head. He joined his palms together and bowed to the food and then began to eat.

‘The man from that place in the city is coming in a day or two, Kavita told me’, said his wife. ‘She got bags of rice and wheat in return for her cow and buffalo’.

‘We are brahmins. The cow is our mother. I will not sell my mother. And that too to a Muslim’.

‘Have faith Rama. Be strong. Only faith and Dharma can save our souls in this Kaliyug’.

‘What about our child? Can you tell this to Sona?’

He looked at his daughter feeding the goat one of the bananas from the satchel. Could he tell her this? The only proper meal she was getting was at school. The watery daal and the bhaat were better than nothing after all. He had to feed his family. Wasn’t it his dharma as well?

‘I can’t sell that cow, Rama. Our ancestors, how can I shame them with this immoral act? Shastras say that the cow is the only wealth of a brahmin and she is the one by whom he sails to the afterlife and, ultimately, the Moksha’.

Rama sighed and looked at the moth circling the lamp. She picked his plate and left. He lied down at the cot in the yard and lit a beedi. Humming the tune of the bhajan, “Raghupati ragahav rajaram”, he smoked and stared at the stars.

A month had passed and he had got no invitation for any puja or blessing or ceremony of any manner. The quantity of rice on his plate had shrunk to the point that he had a perennial craving for food. The sensation of this ever present hunger dulled his senses and he found it difficult to concentrate during his daily reading of Geeta in the morning. For the last few days he had been urged by many of his neighbours to throw his dharma in the river and sell his cow. But Pundit Vishwanath would not budge. And his stature and position among the villagers stopped them from arguing with him. He was an authority on the shastras and had settled many disputes among them by dint of his moral authority. But a few among them found him, under these circumstances, smug and arrogant. For them, he had a duty to his family first and it was more important than the sermons of faith and dharma that he was so fond of delivering to them.

The government aid had not materialized yet and the village was facing the threat of starvation now. A lot of families had locked up their homes and left for the city. The attendance in the village temple had fallen and the slaughterhouse man had his hands full. The peepul tree in the centre of the village square was silent these days as the crows had migrated to places where water and food was available. The pond was dry and the only well that was left with some water was running dry, fast.

He came home after a small puja at the village barber’s house. The satchel was almost empty today except for a kilogram of millet. Rama rushed to him.

He could hear her cough and moan. The girl was not getting enough to eat and had become wasted. She had fainted today. He ran inside and saw his daughter lying as a heap on the cot. He touched her forehead; she was burning with fever. “Mahadev! Help me!” he wailed and looked up at the rafters black with soot. Only food could help him now.

The neighbours had also heard about this and had come to look and offer advice.

‘The lorry is going to leave for the city now. You still have time Pundit ji. Sell the cow and save your girl’.

‘Yes, yes. What is the use of dharma if it kills one’s child’, offered an elder.

Vishwanath wiped his tears and stood up. He took the cow and set out for the peepul tree. The lorry was parked there, its engine running. He could see the eyes of emaciated animals visible behind the grill.

‘How much for this cow?’

‘Let me see. There is nothing left here. Looks like a walking skeleton to me. I can’t offer much, Pundit ji’.

‘Just tell me what you can give’, Vishwanath was close to tears. He clasped his hands and pleaded to the man he would have not even talked to earlier.

‘Have you no shame?’ Vishwanath was indignant.

‘Don’t you think you and I are past that now?’

The man took the rope and Vishwanath, weeping, turned to avoid looking at the cow being shoved into the lorry. It was close to dark now and the peepul tree loomed black and large. With a clanging of gears, the lorry left a cloud of dust behind as it set off for the city. After the sound of the lorry faded away, it was still now. The cicadas were singing.

Pundit Vishwanath picked up the bag of rice; he felt crushed under its weight. He adjusted it on his shoulder and as the last light drained out of the western sky, he began walking slowly towards his home.