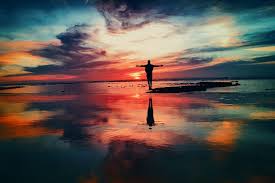 David was enjoying his newfound freedom, akin to his carefree days of Poonthura, with gay abandon, after four years of conjugal confinement. With no one around to hassle, after a long… long while, he deserved to enjoy this grand Sunday lunch to the hilt; what with bottles of rum, pickles, mutton biriyani and pots of toddy on the platter.

He tried to wheeze the marrow out of a sizeable bone, unusually, in vain. Of all that mutton consisted of, marrow was the yummiest

dessert at the fag-end of a sumptuous meal. While all that preceded satiated his stomach, marrow was sort of soul food. Reminiscing about a slipped piece of marrow while aiming to breathe it out of a gritty bone, he grabbed a pebble stone and cracked open the bone, just enough. There it was; alluring, full and tantalisingly wobbly. This one swallow was potent enough to make, not one, but several of David’s days.

If he indeed wished to enjoy this moist evening, he had to tackle the affair that is slated for the afternoon. Sheela, his ex wife, divorced a year ago, had phoned and, despite his pleas to the contrary, was to arrive anyhow, anytime now. Although the suddenty flustered him, given her volatility, he essentially dreaded the outcomes she was capable of forcing. His neighbours, with whom he shared a thatched wall, were tough and gossipy. He always blamed the spiteful neighbourhood for the split-up. While many of his relatives had hastened the separation by alleging her infidelity, Sheela always blamed David’s tuberculous sterility. Having born and brought up in Kochuthura, she prided that, owing to Christian ethos, the people of her village were incapable of being unfaithful.

Counting upon David’s pensive, trepid state, the flies were trying their best to salvage their share of the marrow out of chomped bones, crumbs in the plastic plate.

Sheela stepped into the hut with an air and aplomb that was the reserve of wives who were ‘still’ legally wedded. A whole year of maternal nourishment in Kochuthura rendered her visibly rounded; a heavier Sheela was more ominous. This was the first time Sheela treaded back into the hut after the embattled, embittered separation. While she winked at him, he avoided the all-too-decisive eye contact.

She grabbed a pock-marked, unwashed aluminium plate lying by David’s side and served herself out of the pots that were equally swarmed; the flies flew away en masse. Overwhelmed by her belligerent manners, David retreated to a darker corner but, given the tiny size of the hut, he was not far enough to be secure. Just as he was feeling all-too-exposed in front of Sheela the tigress, the voices, noises emanating out of the adjacent hut comforted him.

But, when Sheela rises, ruthlessly rampaging like a wavy tsunami, imperilling every life; no one could hide, no one was spareable. Nor can any inanimate stuff survive the blitz. Like the day, a year ago, when Sheela maniacally pummelled a dozen women, men and children before inflicting deadly blows that left fractures on David’s legs and ribs. A year on, he is still licking his wounds and, having not recuperated enough, subsisting on half the government salary.

The spreading rumour, which spiralled to Kochuthura rather late, about his wanton ways and debauchery, even while coughing tuberculosis, has brought back Sheela to Poonthura. Contrary to his fears, Sheela asked him nothing about it. But he had a prepared, well-rehearsed response in case she did; “We are no more man and wife, it’s none of your business.”

After gobbling down all that was there, Sheela stretched her legs and snored into what eventually turned out to be a three-hour siesta. Woken up by the unmistakable snore, the gossipy neighbours trouped into David’s hut. Anthony, always-at-sea neighbour, gestured at David asking about the outrageous appearance of his former wife. When David cried his ignorance, Stella, Anthony’s wife, kicked Sheela out of her dreams of reunion.

Even before Sheela was fully out of her slumber, everyone, who had received expert blows at the hands of Sheela a year ago, was spewing venom. In reprisal, they collectively thrashed Sheela inflicting, this time, more grievous gashes than they had received. Though strong enough to give it back, the suddenness of the assault left her no time to respond and the severity of the blows and their numerical superiority left her clueless, powerless. Sheela ran away spewing the best of Malayalam swear-words. The leader of the slum reassured David that he was safe from any such future attacks. Anthony and Stella consoled him over his wife’s sudden re-entry and the mental strain it caused.

After the incident, Anthony and Stella turned too caring, loving. They shared their food, happiness and even grief with him. They dragged him to one of Stella’s aunts’ funeral where David was served the best of toddy and beef biriyani he ever tasted. After returning, their relationship grew deeper. Now the Anthony family shifted from their rented one to David’s own hut saving five hundred rupees that flew away in the form of rent, every month.

Citing fishing stories, Anthony often disappeared during daylight hours leaving Stella and David alone in the hut. Using her charms, Stella swindled all that David owned, including the hut and piece of land under it. Having secured his current half salary, Stella now eyed his pension; though the amount of pension that David would earn was meagre, it was enough to spend one’s old age comfortably, if not lavishly.

In a dramatic turn, even before the statutory six-month period, Anthony divorced Stella and went away leaving her alone with David. Six months of live-in life with her was enough for David to consider Stella as his soul mate. In just two months, Stella was pregnant with twins. The twins, having never had children with his first wife, were a double bonanza David could hardly wait for. It would be sacrilegious if this god’s twin gifts were to be born out of wedlock. They were declared man and wife by a Pentecostalist priest. A week into their marriage, David had to register Stella as his new and only wife who could be the sole beneficiary of his pension in case of his untimely death.

Having spent months on high seas, on a rainy evening, Anthony stomped in style that was the prerogative of legally wedded husbands. The s

ight of plump Stella made Anthony nervous; once ashore, he always needed few days to return to his elements. Stella, disregarding David’s jolted looks, served biriyani and Anthony’s favourite fish Chala curry to his heart’s content. Within minutes, with his unwashed hands as pillows, Anthony burped his way to forty winks. When Stella served food to David, there was hardly any bone left that had marrow in it. Anthony had sucked, swallowed all the marrow that was hidden in every hole. David chewed the hollow, tubular bones and snored away his marrowy sorrows. When he was woken up by his whooping cough, in the wee hours, the twilight rays entering the holey hut exposed the thing he dreaded all night; Anthony and Stella were engrossed in making love; devoid of love. David swiftly slipped back into his blanket and pretended snort until it was impossible to fake it anymore and, out of sheer exhaustion, actually slumbered away remainder of the wee hours.

When he woke up late in the morning, Anthony had left. Even before he could enjoy the sigh of relief, the sight of Stella shocked him; her three month old pregnant belly was missing. A flat tummy and a shapely waist appeared in its place. Just after bathing, while she was about to drape a nylon sari, her pneumonia blouse was bursting at the seams.

Ragefully, instantly summoning abnormal pluck, David tousled her to the floor and mauled her unconscious. But, before going cold, she had clawed his face, back and bit off a bit of his left ear lobe.

Hearing the news on the high seas, Anthony appeared within an hour. Looking at a haggard, lifeless Stella, he punched, kicked and threw David out of the house. Splashes of water instantly shook Stella up; spewing Malayalam cuss words, she cried out for more reinforcements.

‘What else do you expect of a young woman…you eunuch…invalid TB…impotent bugger,’ howled Anthony. Within moments, even before David tried to alert his own kin, Stella’s troupe arrived. David was stripped, booted, and hauled, along the grimy lanes of Poonthura, towards the resting catamarans. Shouldering an unconscious David, Stella’s cousins lobbed him onto a raft.

Orphaned by his own kin, David lied under the raft for a day. Dazed and drained, he wandered about the shore for a week and, in the end, ended up in the general hospital where, being a government employee, treatment was free. His myeloma worsened, chemotherapy proved ineffective and bone marrow transplantation was the only way to save him. Several donors, including his relatives, were tested but none of them had matching human leukocyte antigens.

Abandoned by everyone, with no compatible donors in sight, death devouring him gradually and just a few weeks left to die altogether, David slipped into unconsciousness. When he regained wakefulness, a few weeks later, after the successful bone marrow transplantation, the surgeons pointed towards Sheela; the most compatible bone marrow donor.