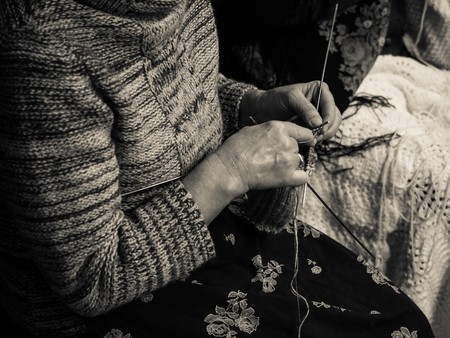 The soft hum of the aeroplane was enough to bring her out of the house, with her chore at hand tagging along, the knitting needles between her fingers still working adroitly. She clucked as she waved at it with the half-finished mittens flying high in the air throbbing like her heart beat, sun kissing, wind surfing, fluttering without any worry in the world. But soon she curtailed their movements. She brought her hands back under the confines of her shawl. The mittens stopped their gay abandon and were calm now, secluded from the improprieties they were subjected to just a few moments ago. She was back to being stoic, impassive and unsmiling, her own distant self that she had become after a long wait.

“ Ruhani, come inside! Do not stand out in such a chilly weather. Who will take you to the doctor if you get sick?” Satish called out loud, making her jump as she rushed inside.

“ I was only looking at the plane. You do not have to guide me all the time. I can take care of myself.” Ruhani snapped back as she resumed her knitting, sitting on the chair humming now to stymie the flow of conversation that was going to become a cause of fight soon.

She watched Satish through the corner of her eye to realize that he was reading the newspaper upside down. She could not contain her glee and rose up to her feet and barged at him with an uncharacteristic candor. She shoved away the newspaper from his hands, shuffled it and then handed him placing it the right way in between his nimble fingers as he looked mildly annoyed.

“ Now!!” She said. “Now, you read it. At least you would be able to get some words inside you. Don’t you make a sham of reading all the time when you are doing nothing more than chastising me .” she looked at him with a challenge beckoning in her eyes.

He smiled and held her hand and as he bent down to kiss it. She shrugged her shoulders and moved away from him, a little embarrassed at this sudden gesture of affection.

“ What is wrong with this age?”

“ We are in our seventies. We need to behave a certain way.”

“ Not in India at least. We are in an age where we should be tending to our grandkids.”

As Ruhani uttered the dreaded word she saw the color changing on Satish’s face. She saw his face growing limp, his eyes losing the twinkle and his demeanor changing as sadness that had been kept at bay with their mild banter made its way in the room, in between them.

“ Are they coming this year?” he asked wiping his glasses with the corner of his shirt.

“ Yes,yes, they wanted to come but then they changed their plans at the last moment. They are going to Cancun. It’s a big tourist destination in Mexico, they told me.” Ruhani sighed.

“ But that’s okay. They will come next year. We can visit them in the states. They have never said no.” She buttressed her case strong with more arguments lest Satish should fall into the same old ploy where they spend endless hours reminiscing the good old times and end up comparing themselves with the neighboring Mishra ji who lived with his two sons and a gaggle of grand kids under the same roof.

“ Mihsra ji..” And the saga was about to unfold but Ruhani walked away from him in the kitchen banging the pots and pans, an indication that she does not want to be drawn in this diatribe of comparisons. The axe would eventually fall at her where she would be held culprit of being the one who necessitated the need for foreign education for their son. That he never returned and decided to settle there was a different matter and to something they eventually reconciled. But his marriage to a girl who did not belong to their faith was a repugnant thought to them and though they tried to talk him out of it, he did not honor their wishes. For the same reason, they did not take up his invitation to visit him or grant their blessings to the newly wed bride.

They kept on hoping that he would come home someday asking for forgiveness and they would gladly indulge him and do all the necessary rituals welcoming the girl in the family. But he never came and now after many years when the couple had been blessed with two kids their yearnings to see them has multiplied manifold. Despite their veiled attempts to let him know that they have forgotten and forgiven him for anything, everything and now they want to meet the kids, he had been impassive. He assured them that he would come one day and bring the kids but he had not acted in this direction. Every year his travel plans changed, he traversed distances but he did not come home.

“We should get our passports made soon.” Ruhani was back in the room facing Satish with a new-found urgency.

“ We do not need an invitation to be with him. He is our only son. We can help him with the kids while they go on with their jobs. People call the grandparents all the time and this is what we are for! Isn’t it.” She looked hopefully at him as he shrugged his shoulders in a non-committal way.

“Okay, if this is what you want. We will get the passports made.”

“ He can sponsor us and there will be no problem getting visa. Trump administration has a soft corner for the grandparents.” She beamed at him and he smiled nervously at her preposterousness and her planning.

“ Did you ask him if we can come?” he asked him that day after the passports all blank and with shiny covers had arrived. They had given the postman crisp hundred rupee notes from their savings and distributed sweets in the locality to celebrate this little achievement.

“ Have a safe flight!” Mishra ji had commented when an entire box of ladoos was delivered to him for his extended brood.

“ Arre abhi kahan! He will send the sponsorship first and then we will apply for visa. “They had replied.

And now she did not rush to see each and every airplane that flew above their house.

“ We will soon fly in one of them. I wish I could see Mishra ji from up there so I can wave and let him know that we are finally going to meet our son. We should start searching for flights, the cheap ones. They need to be booked earlier. And gifts for everyone.”

“ But did he send the sponsorship. And the visa! We need a visa first and other things come later.” He was offended by her planning that entailed a detailed vision of perfect picture future scenarios.

When the sponsorship did not arrive for many months, the agent they hired, grew restless. He asked them not to make unnecessary visit to his overcrowded office that was burgeoning with desires and dejections, with people who wanted to visit their loved ones, their near and dear ones, people who in any case just wanted to leave and go and people who only wanted to enquire and feel happy that some amongst them were leaving for good.

“ Why is he not sending the sponsorship? Tell him that without that the agent cannot apply for us. He says, it’s a must. He says the government is very strict.”

“ Well, he says he will be coming next year so there is no hurry!”

“No hurry! What does he mean there is no hurry? The children are growing up and we have not seen them even once. How will they connect with us?”

And next year too he did not come. They ended up pressing the agent who applied for their visa without any significant documents in his hands. The visa got rejected and a pall of gloom descended in their conversations.

“ I told you not to act in haste. He said he will come next year.”

“ He said that last year and even before that.”

The roar of airplane made Rupali rush outside and she stood there for a long time looking at the twinkling lights of the aircraft as it disappeared from her vision in a slow motion. She kept waving as the evening clouds engulfed the little image of hope, which seem to ascend to greater heights, beyond her reach and sight now.