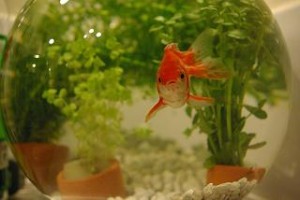 It’s been a week. A week since the aquarium has been sitting in the living room, on top of the fancy mantelpiece. Abhijit had bought it as he felt that it would add to the beauty of the house. Indeed, most of the furniture and artifacts are of his choice and this too was an addition. And as usual, it was lovely.

There are four goldfish in there, I counted them on the very first day. Did the children count them too? I don’t know or didn’t notice. I was so spellbound by the fish myself that I found little time to think of other things that day. Like asking Dolly if she had added cumin to the chicken or made the cucumber sandwiches for tea. Or checking whether the clothes which had returned from the laundry were properly starched and ironed. Or even the other things which generally preoccupied me –– such as wondering why Sonali and Ravi were late in returning from school, why Abhijit never called me when away from home and what had become of Mala, the freedom-loving girl whom I’d known as a child. I was captured by the fish in, how can I put it, a singular manner. Somehow, they and I seemed to share an uncanny similarity.  But what it was I couldn’t fathom.

That evening, the Bagchis paid a visit. Mr. and Mrs. Bagchi, the childless middle-aged couple next door. A while after coffee and snacks were served, the men went out to smoke. Mrs. Bagchi and I were alone. Trying to make casual conversation, I shifted in my seat uncomfortably, wary of any unsolicited advice that she might shoot. To my surprise, she showered me with an appraisal that I wasn’t really prepared for. “You are a lucky woman,” she told me, “Pretty and efficient, with two lovely children! And of course, a sincere, doting husband.” She smiled and I returned it. What else was I to do? But as I did it, one of the goldfish (I think it was the orange one) in the aquarium behind her, looked me right in the eye. My smile froze. I could feel a lump in my throat. Don’t fool, said the fish, continuing its routine gulping of water. I almost mumbled, what? But the fish said it again, this time more coldly, Stop lying, you fool.

Mrs. Bagchi was commenting on the design on the sofa but she stopped mid-sentence, and then following my gaze, turned to look at the aquarium. The fish immediately swam away. “Wow! What a beautiful aquarium,” she remarked, “Is it a recent item?” I must have mustered a reply for she looked satisfied. But I found it hard to get my eyes off the fish. Could it talk for real? This couldn’t be, or others in the family would have surely turned it into a topic of conversation. Then…could it be that the fish had spoken to me alone? Somehow, for some reason, I was the destined one with whom it had chosen to communicate, to unfurl its powers of human speech. A secret thrill tingled me at the thought.

The other day, Abhijit told me he’d be late in returning from office. Unfortunately, I was planning a surprise for him that day and had already booked the tickets for a movie in the evening. It was the tenth anniversary of his proposal. I doubt whether he remembered it, but it was my plan to remind him of it in an unexpected manner. Hence, I tried hard to cover my disappointment as he broke the news to me. I was handing him his coffee then. In fact, my eyes were smarting and my face had begun to crimson. But Abhijit did not notice and this saved me from an awkward effusion.

However, at seven that day, when the children were at study and Dolly was in the kitchen, I felt an inexplicable feeling grip me. I remembered how it was approximately at this time that a young man had sought my hand a decade ago. Was Abhijit the same person, I wondered. Or had some fantastic image nestled in my mind at that point? The years had shifted like sand, rubbing from my mind the definiteness of memories. I no longer knew which was true, and which was not, what had been and what had only shimmered, like a mirage. It had all convulsed in the giant ball of life, and was rolling on relentlessly.

Except that, at times, I felt a little left behind as I did then. I found it difficult to concentrate on the usual soaps I watched. Was I missing Abhijit? My mind decided in the affirmative. Perhaps, I could call him and remind him of the day’s significance. Ask him whether he would like to celebrate it the next day in some way. Would he get angry? Or grow contrite? I noticed the fish watching me again.

Two of the fishes kept their eyes on me as I dialled Abhijit’s number. After three rings, a mechanised voice informed me that he was unavailable and politely asked me to leave my message after the beep. I hung up. The fishes had started swimming again.

It is strange the way fishes move, their mouths gulping water and gills flapping rhythmically to keep beat. I know it is the way they breathe. But, a part of me says that they do that because they are thirsty. Thirsty to the core. Though they live in water, there is in them a great thirst for water –– of the other kind, which would not just sustain them but give the energy to live. But as none of the latter is available, they gulp what is there at hand. People, however, being ignorant of this, take it as a sign of breathing.

Today is Saturday, a holiday. Ravi and Sonali are away on a camping trip organised by the Fun n’ Frolic Society. Dolly and I have helped them pack their duffel bags with all the appropriate things –– clothes, biscuits, sugar, torches and the like.

I had looked forward to talking to Abhijit. The last few days, he had been coming home late, work being the pretext which had left us without much time for interaction.

I had forestalled my breakfast, and when he (having got up late) sat down to have his coffee and toast at nine o’ clock, I joined him. His face, however, lay buried in the newspaper.

I wanted to tell him about last Wednesday, of how he had forgotten the day when we had tacitly become one. Go on, says the yellow fish from the aquarium, tell him. But for some reason I’m unable to. And this forms only another brick to the wall that had begun to rise in front of me. Tell him, tell him, the other fish now join in the chorus that rings alarmingly in my ears.

Instead, I tell him about the fish. “Dear”, I say, “I think the fish in the aquarium are feeling thirsty.”

“What?” he lifts his face distractedly.

He glances at the aquarium. The fish are now swimming in the ordinary fashion, not in the least evincing signs of having been in communion with me. Abhijit smiles. “Mala, it’s actually not a good joke, you know, given that thirsty fish is an oxymoron.”

Pondering upon it, I examine the words. Fish live in water as they are aquatic beings. Yet, could they not be thirsty? Though it appeared to be fallacious to the ordinary observer, I knew it was true. Water was simply the corporeal thing, couldn’t Abhijit see?

The curtains flutter in the wind, revealing yellow-leaved boughs. We are thirsty, so thirsty, the fish echo again and suddenly I realise that we were both chanting the same words. And this time, it was the voice of Mala, the freedom-loving girl whom I’d known as a child.

Besides her fulltime job as editor, Ananya Sarkar is a freelance short story writer, reviewer and poet of sorts. She has earned her Masters degree in English Literature from the University of Calcutta. Her work has been published in The Times of India, Woman’s Era, New Woman, 4indianwoman, Children’s World, Muse India, Induswomanwriting, Conversations Across Borders, and Indian Ruminations. Ananya won the first prize in the Story Writing Contest organised by the American Library as part of the Fiction Festival, 2008 and was shortlisted for the Pomegranate National Short Story Competition, 2011. In 2012, she secured the second position in the LoudReview Review Writing Competition and the first position in the Induswomanwriting Poetry Contest. An interview of the eminent journalist and writer C.Y.Gopinath was conducted by Ananya, which eventually got published in Muse India.