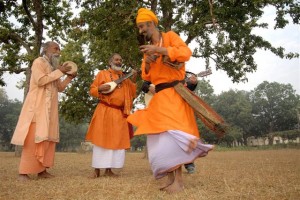 Connection with spirituality may not be termed as India’s tradition but a practice since ancient times. The belief of a supreme power and the will to connect to divinity has been prevailing since Harappa and Mohenjo-Daro civilization. This was intensified with literary landmarks of the two great Indian epics the Mahabharata and the Ramayana which can also be termed as spiritual and social landmarks. Rarely any ruler in India has existed without an inclination towards a particular religion. How can the greatest influence in the earth be out of this! Yes, music too collaborated with this connection. Though the Indian classical music can be termed as ancient of all of its kind but it was much limited as court music either for Harem of the kings or for royal religious practices that is it was much confined to the pleasure of the then upper classes, especially rulers. But how can the farmers or lower classes stay out of this! If music is the greatest influence then it must affect all and yes it did affect all. Some of the religious sects of the lower classes and saints started typical devotional genre of songs that seemed to come out just from the particles of the Bengal soils. These songs originating around 15th century were called Baul songs which later got popular establishment in villages and rural areas of Bangladesh and West Bengal. An interesting fact to observe here is how these songs were passed from one generation to another that is the teaching procedure. We are aware of the fact that Vedas were passed on orally generation after generation by the saints and hermits in ancient times till they got inscribed in papers. Dr. Jeanne Openshaw’s research and writings tell us that Baul songs seems to follow the same tradition of passing down orally from 15th to 19th century. In the 19th century they were first transliterated and their popularity intensified in yearly functions arranged in countryside areas. Some Bauls even made their way to the towns but the saddest part is the rising graph has fallen drastically over the last few years. The reason to call it sad is the loss of originality of land. A land becomes culturally unique due to the inherent cultures arising out of its own people and soil. Baul song and the Bauls seem to be exceptional in its originality when we think of Bengal. After a boom of Baul songs in the 19th and 20th centuries it seems to fade away in the archives of history. The pen of Kabi Nazrul Islam and Rabindranath Tagore which once moved in their praise too seem to sparkle as distant stars. The only places where it can bloom as flower are now restricted to Jaydev mela and Baul Fakir Utsav. For the rest of the years they can be seen with theirEktaras acting as bowls for beggars.

The main reason of their decline or gradual fall may be the fact that spirituality is colourless and quite a tough path to walk into. The ultimate happiness may be too far a thing to believe in for the current generation where the only motto is survival of the fittest and fastest.Naturally out of a busy and hectic run scheduling the everyday corporate city life, the present generation prefers short and sparkling music that can burn like crackers and die out within a short time after giving a thrilling sensation rather than wait for spiritual and high pitched Baul songs to spread its fragrance like an incense stick. They just want to hear, dance, forget and yet again prepare for another hilarious weekend. This has paved the way for the band culture with numerous Bangla bands mushrooming up in and around Kolkata. The western influence has strangely strengthened long after the British left our land and it is gaining power replacing the Ektara with guitars and the khol with a set of drums. What remains same is amusingly the high pitch in both of them and the philosophy of social life and crude realties of society in simple and subtle language. Bengal seems to have yet another accent of speaking Bengali which one may quite often hear nowadays if he/she lends ear to any Bangla rock band.

Ways of perceiving things is subjective and people with alike thoughts can be considered as a community. If a community likes a form of music it should exist without any thought, for human values are alike. Villagers may still prefer to stick to listening to Baul songs rather than Band songs and on the other hand students of engineering and arts colleges might prefer Band songs. So, co-existence of both Baul culture and Band culture is quite justified but money flows in cities. The monetary circulation is still stagnant in the villages ofBirbhum where most of the Bauls have a status even lower than farmers. Future generations cannot expect a strong base of minimum income though singing and performing Baul songs but young Band singers in cities can positively dream of prosperity. One can have high hopes from new bands like ‘Calcutta Blues’ or ‘Delete’ to rule the stages of college fests in days to come. We might not find more causes of the increasing popularity of bands but still listeners do exist in masses for both types in spite of the declining graph of Baul music.

Still some efforts are seen to preserve these and they come from no men in power but ordinary people which too needs an applaud. The name ‘Akhra-Charja’ might not be familiar but its works might be an inspiration for others who love folk songs. They are a group of people working with their limited means and capacity for the welfare of the unprivileged children of Bauls/Fakirs and folk art preservation. They are trying it from their spontaneous involvement, association and attachment with the folk artists, particularly Bauls and Fakirs spread over large areas of West Bengal particularly Birbhum. They have started a night school for the primary education of children of folk artists and have made arrangements for some events in Kolkata where the Bauls or folk artists can introduce themselves to the urban people. Such efforts are not just a hope but proof of a strong base in the typical high pitched mystical songs. The inclusion of Baul culture in the list of ‘Masterpieces of the Oral and Intangible Heritage of Humanity’ by UNESCO was indeed a high recognition but much like a life time award to a comparatively young art form as if telling it to retire. Constant efforts by ordinary people as discussed above seem to throw a challenge against this.

Welcoming new is always good but loosing originality is unfortunate and Baul is our own culture made up from our own soil which needs to be written down in books and practised more rather than securing their place in the museum of history.