we new
Home Contents Articles Not mere GDP, the gross happiness accounts the development of a State... 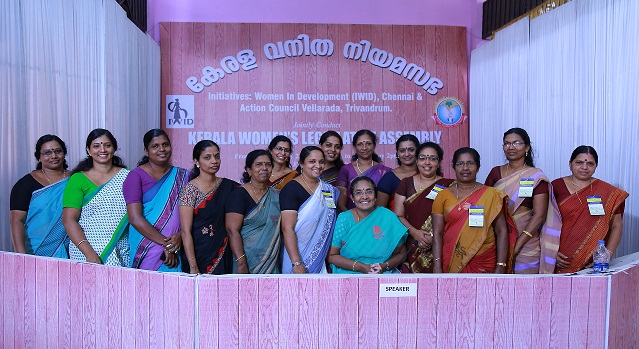 A successful attempt to model the Kerala State Assembly for the first time by the women in the State has been conducted during 27-29 January 2017 at Vellarada.  Organized by the Vellarada Action Council and IWID, Chennai (Initiatives: Women in Development), in collaboration with WIWA (Wide Inspiration Wide Aspiration) women assembly was a successful attempt by 100 women from all parts of Kerala to practice the legislative procedures. The 3 day session, followed the usual procedures of the Legislative Assembly.

Suja Soosan George, Director, Malayalam Mission inaugurated the event on 27th January, 2017.  In the inaugural speech, she said “Whenever the society finds democracy degenerating, it will act thereby to strengthen it to its core. We have not yet witnessed a 2 digit women representation in the Legislative Assembly. Women are capable to carry out any role in the field of democracy and governance.  The Women Reservation bill is pending for long years, which should be considered for approval immediately by the Government.”

Advt. Jameela Prakasham, the former MLA was the speaker for the Assembly. T. Radhamony addressed the assembly as the Governor and delivered the speech which explained the policy of the Women Ministry. Women Legislative Assembly defines development in terms of Gross National Happiness. It explains the happiness or the satisfaction of the people is important than the gross production or gross profit.

The proceeding of the Women State Legislative Assembly was handed over by Geeta John to C.K Hareendran M.L.A in the concluding session chaired by Reslayan, the president of Vellarada Action Council on 29th January.  The participants responded that it was an innovative experience which evoked creative thoughts on governance.