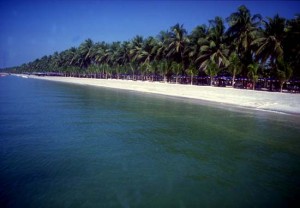 Abroard  SJ-319, the glimpse of the landscape from the window, as if hand-carved by a master carpenter, literally takes your breath away. ‘Far from the madding crowd’, the Andaman and Nicobar Islands truly belies its attachment to mainstream India. The rich history of the island, as showcased in the ‘Light and Sound’ show at the Cellular Jail, the cornerstone of ultimate British oppression, does ignite a flicker of patriotism in all and sundry…The darkness of the hotel verandah soothes the tired nerves. A faint light emanates from the distant ‘North Bay’ island; almost like a midsummer night’s dream…The ‘Jolly Buoy’ Island transports one to childhood fantasies, as it seems like turning the pages of ‘The Adventures of Robinson Crusoe’ and taking a frame out of Tom Hanks’ ‘Cast Away’. Each decaying brick encapsulates the charm of pre-independence British architecture at ‘Ross’ island.

Be it snorkeling and swimming in the Bay of Bengal or taking a quick dip to collect beautiful corals, it is an experience rivaled only by an elite few. Filth is nonexistent as one surrenders both body and soul to the aura of the crystal green. The rains lash down mercifully, as if manna from heaven, extinguishing the heat…A ‘titanic’ feeling engulfs you as you come face to face with the vast openness of the ocean, standing on the front most portion of the ship, that takes you to ‘Neil’ island.

Sitting on the porch at night, I listen to a sailor-song, played by the hotel staff, and feel a silent communion with the dark waves lashing against the nearby shore. An irresistible urge to walk up to the unknown shore of the moonless night grips you but fear of snakes keeps you at bay…From impressing Canadian and German tourists with my knowledge of world affairs to being invited to an Andamanese wedding, my inter-personal skills bear fruit… At the Dolphin resort at Havelock, imagine the feeling as the waves softly kissyour feet while you lay recumbent on an easy chair! Moving further north and exploring the heart of the tropical rainforest at ‘Baratang’, you recount your old geography lessons, as the stalactites and stalagmites inside the dark limestone cave come to life.  En route ‘Rangat’, you wait with bated breath for the occasional sight of the ‘Jarwa’s, the ancient tribe, still to shake hands with the world outside, almost sprinkled like animals in the forty mile long jungle stretch… The fisher-village life at Rangat, its simplicity enviable, bear a striking familiarity with its portrayal in Desai’s ‘The Village by the sea’.

It is easy to ramble on but cutting a long story short, Andaman truly prepares one for a potpourri of experiences that leave an indelible mark on the sands of eternal time. It perhaps reflects how God intended His earth to be, until their remorseful transformation into today’s modern, congested cities………