“Tch! You are going already?”  Sarla’s mother made a huge show of getting up the sofa and headed towards her cupboard, disappointment writ large on her face.

“Something for the kids.” She handed over a package to Sarla while the latter grabbed it distractedly, her mind racing ahead of her steps, towards her home. The older lady felt tears forming at the back of her eyes, but gulped hard to stop them from advancing any further.

“You should visit more often.” She placed her wrinkled hand on Sarla’s cheek.

“You know Ma, it’s a very tedious task to come with both the kids and even more cumbersome to leave one back home.” Sarla decided to not prolong the conversation. She hugged her mother in haste and left for her home.

Sarla was very much aware of the tears her mother withheld with great effort, all for her sake. She knew her mother noticed how her smile did not reach her eyes any more. That over the last 6 years her circumstances had taken a toll on her happy go lucky attitude towards life.

6 years ago, when Meher arrived 2 years after Nandan, Sarla had been ecstatic.

“My family is now complete Ma! She is a true gift from God. I’ll name her Meher.”

Little did Sarla know then, that Meher would turn out to be an exact contradiction to her name. Now Sarla remained in a perpetual state of being choked up on unshed tears as a question loomed large in her big but vulnerable eyes.

Why me? She spent innumerable sleepless nights restlessly pondering over the question. But the answer remained elusive and nothing alleviated the pain she felt at the sight of a six year old Meher lying motionlessly in her cot.

When Meher did not meet her first year milestones, the doctors assured that it was nothing unusual and that they must be patient. By the end of second year they suggested physiotherapy for her. It meant an additional financial burden of an expensive treatment. With her driver husband’s meager income they had been living a life of limited resources but huge contentment. This therapy was a huge ask on them. Yet, they hoped that their girl would soon recover from whatever complicated disorder the doctor named she was suffering from.

Today, 6 years later their hope had diminished to zilch. Meher was still the same lump of mass dependent on others for everything, except for breathing.

“This therapy is costing us our lives” nonplussed by her husband’s harsh words, Sarla continued to feed Meher the chicken stew she made from the left over bones from yesterday’s dinner.

“Do you realize that this stew would actually do more benefit to Nandan? His legs need to be strong to play football.” Mahesh’s insinuating words felt like spears being poked into her heart. But she couldn’t dwell on any of it as she rushed towards the kitchen where the milk threatened to overflow.

“I can look for a job at a nearby parlour.” Later that night Sarla whispered to her husband, “We will have some additional income and we can send her to the City Asylum for the Handicapped.”

“A few thousand rupees will not make any difference.” Mahesh brooded hopelessly, “Sarla, do you realize that Meher is only breathing. But Nandan, and for that matter both of us too need to….”

“Enough! How many times have I told you not to talk like this about our daughter? We…we can’t just stop her therapy.” Sarla snapped with a shriek. She got up from the bed and walked up to the other corner of their one room set-up towards Meher’s cot.

She ran a loving hand over Meher’s head. Was Meher slated to be a life-long liability on them? Will she become a source of unending resentment? A roadblock to her family’s happiness? Sarla felt her heart break into a million tiny shards.

For days that followed, silence in Sarla’s home was only interrupted by Meher’s gurgling sounds and occasionally by Nandan’s subtle cheerful noises. She was painfully aware of how the entire situation was taking a toll on 8 year old Nandan.  He had matured beyond his age. It hurt to see how he went about his life with absolute docility, never putting up any fight for anything.

“I have prepared dinner and kept it on the shelf.” She called out to Mahesh as she got ready to leave, “I will be back by tomorrow evening”. She was visiting Haridwar to offer a special prayer for Meher suggested by her mother’s priest. Mahesh considered it to be downright futile, but thought better to voice the same. He saw his resolute wife pick up a petite Meher in her arms and walk out of the house.

Sarla reached Haridwar in the wee hours of morning, and headed directly towards Brahmakund, the acutely busy river bank where thousands thronged to take a dip in the holy water of river Ganges. It wasn’t dawn yet, and the place was already buzzing with activity as people hurried towards the river and out of it with a notion of having washed off their sins. Some lighted lamps and immersed them in the water to make a holy offering. Hundreds of priests sat by the river, and were commencing rituals for families and offering prayers to the deities.

Making sure that her face was covered beyond recognition by her grey colored scarf, Sarla searched for the priest her mother had described to her. She spotted the evidently recognizable burly man with long white beard by the river. He collected some water in the cup of his palms from the river and offered it to the rising sun. She confirmed his identity by the protruding sixth finger from the palm that was raised high in the act of making an offering. She walked up to him and went down on her knees infront of him.

As the first rays of the sun kissed the waves of the holy river, Sarla stood by the priest in the river, dipped till her waist in the chilling water. Her scarf still intact over her face provided some respite from the cold that otherwise threatened to cut through her bones. The priest held little Mehar in his arms while murmuring chants that were incomprehensible to Sarla. As an indication to the conclusion of the prayers, the priest put a hand on Sarla’s head and indicated for her to take the holy dip while he too went down into the river waters with Mehar still in his arms.

Moments later, they came up gasping hard for air. As Sarla walked back towards the river bank, her heart thumped hard against her ribs, threatening to jump out of her throat.

It took a ton load of an effort for her to resist the urge to rush back and pull her daughter out of the turbulent waves and engulf her back into the safety of her arms. She blinked hard to let tears flow out of her eyes, so that she could see the path ahead.

Sarla had offered her soul to the deities, hoping now to make a new beginning for her family.

Mehar is only breathing, but we need to live.

Mehar wouldn’t breathe any more. They could now live in peace…or not.

Anupriya Chowdhary, an Engineer turned Human Resources professional  likes to write stories around the complexities of lives of an average human being. Her books ‘Because I Promised’ and ‘Unusual Equations’ are available on Amazon. 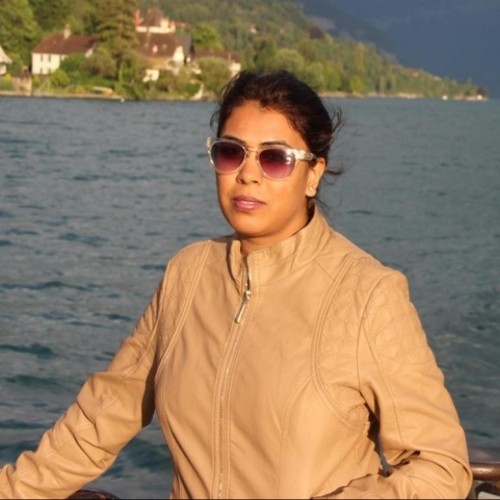