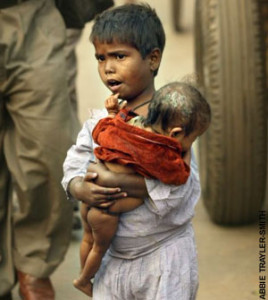 It was almost five of evening. The crowd in the market was getting denser with the sun getting down. The sun had turned to an orange disc in the west. He would look at the redness of sky and would count the bucks he had earned. Today was Diwali and he, probably in his sweet six, from a local village was seated over the footpath. A half pant and a shirt which hardly had even a one button to lock his body he had caused these to hang around his frame. His half pant too was too loose, whenever he tried to stand up to call for customers, his pant looked bustle to travel down and it was enough to expose his buttocks. He was not alone. His two year old sister, crying with the noise of traffic was seated beside him. His brother would clean her nose and would try to make her stop cry but she wouldn’t. He was new to this city, little worried with the way people seemed in hurry. Nobody seemed taking interest in his small shop. No, it wasn’t a shop only he had made it look like. A small piece of dingy and torn cloth, few diyas spread on the same and some cash, it was all his shop had. He had been coming to the city for the last three days to sell his diyas, but it seemed as if his piece of clay art deserved no oil. It was not because his diyas were not designed perfect, neither was he selling it at high cost, but everybody knows that nobody takes interest in diyas now, all they need is few meters of Chinese drizzling electric bulbs. Poor boy, he was facing competition from China in his little age, whose name he hardly had listened. Anyways, he counted his coins and notes again and looked at sun. Today was the last day to sell his diyas and so he was disappointed having his so many diyas left with him.

‘Oh god sun seems in hurry, can’t it wait till my every diya makes bucks,’ he was praying. But can the almighty sun get biased? No, and finally it disappeared. His sister was really lucky for having an over-sized frock. Her legs had been left far behind her frock from the cold. Month of October is not too warm. Cold after the close of the day is enough to make someone click his teeth.

Anyways, he decided to wait for few customers. In last two days, he never had waited so late. His sister was hungry, so he thought of investing his bucks in biscuits. But he was confused. What would mother think about him? Where did he spend five bucks? And after putting his half pant at right height he sat again. He really was unhappy with the city the way it had welcome her clay art.

“What would he answer to his mother when she would ask why couldn’t he make money?” He looked sad. Suddenly his sister wailed loudly and it broke his day-dream. He took her in his lap and tried to console her. But empty stomach was not in mood to endure more. His competitors,

the other big shopkeepers shouted at him.
“Sister-fucker, don’t make noise. I will kill you with the one who is crying,” A shopkeeper, his biggest competitor, selling colourful diyas, candles, and everything a typical  Diwali home needs, screamed at him. It added to his disappointment. He didn’t say a word. He didn’t even look at him. He hugged her sister tightly. He kissed her forehead. But a kiss and a hug can’t fill your stomach, so she kept crying loud as much as energy she was left with. Finally Sheru, his dog came and started making round around both. Sheru was not his pet dog; rather he was a street dog. But Sheru and he lived in same street and their friendship had caused Sheru to come to city with him.
“Sheru take care of her. I am coming.” He stood and left for a local shop to take biscuits for her. Dogs know better than men, how to express love. Sheru listened to him and quickly sat on his two legs beside her. She was still crying, lying on her empty stomach. He had crossed the road. He couldn’t reach to the shop and stood against a crackers shop. A child inside him too wanted some crackers, but he was mature enough to take quick decision. He didn’t have enough money. He needed to buy biscuits and so before his lust could grow for the crackers, he had returned with a small packet of biscuits. His sister was silent now and dog was barking, listening to the sound of crackers the sky seemed filled with. People had started celebrating Diwali. The houses in near were lightened with candles and same bloody Chinese bulbs. He was left with no hope. Nobody would buy his diyas. He collected his diyas in the cloth and was ready to leave for his village. He took his sister around her chest and hung the cloth containing diyas to other side.
“Sheru come,” He said with smile. Finally he was happy. He didn’t need to come to city tomorrow. He was joyful because he and his sister didn’t need to get burned in sun for the whole day. He would play chuppa-chuppifrom tomorrow which he had missed for three days.
‘This time I won’t hide in Chotu’s house, everybody knows my secret place,’ He was thinking and the dog was following both.