Mr. Pillai held a large black umbrella over his head with his left hand. In his right hand, he held one end of his starched white dhothi. The hot midday sun burned brightly, as he walked in the direction of Paradise Apartments to collect his rent checks. “Today I will deal with Bingo, that tiresome Doberman” he resolved, wiping the beads of sweat off his brow. He walked up to the ground floor flat, rang the door bell and then deftly hid behind the stone pillar.

A familiar sharp bark ensued from within, followed by the sound of scampering feet on the mosaic floor. A wet nose pressed itself on the crack beneath the door, sniffed, and then growled deeply. Mr. Pillai, behind the pillar, waited with some trepidation. There were sounds of shuffling and a few minutes later a young, enquiring, bespectacled face with tousled hair, peered out.

“Oh. Mr. Pillai,” said the face, catching sight of the folded umbrella behind the pillar. Mr. Pillai emerged from his safe haven and tried to assume a more authoritative stance. “Ah. Mr. Pratap,” said Mr. Pillai clearing his throat. “I need to talk to you about.. ah..ah.. the dog.” He hesitated and then said, “There have been some complaints ..um..Mr. Thampi’s ankles..the postman, you know..Mr. Nair in #2 is also anxious..The patti, um.. I mean the dog..er..Bingo is becoming a nuisance.”

Pratap shifted uncomfortably. “Oh. I am sorry, Mr. Pillai. I mean I will make sure Bingo is on a tighter leash. Oh. I will also apologize to Mr. Nair and Mr. Thampi,” said Pratap handing over his rent check.

Another sharp bark from within had Mr. Pillai beating a hasty retreat to the stairs.

Pratap stepped back into his flat and studied Bingo’s stub tail with apprehension.

Bingo was a gift from his grandfather or Mutthasha, Brigadier Balu Menon. “An aristocratic Tharavad Nair needs a majestic companion,” bellowed his grandfather. He then handed young Pratap a squirming black Doberman puppy in a wicker basket, for his twenty first birthday. “Then you should’ve got me a Corgi Mutthasha. That’s what the Queen of England has,” Pratap said laughing, and accepted the basket with a bow.

Very quickly, the Doberman puppy filled Pratap’s quiet and bookish life with happiness. Pratap called him Bingo, after his favorite song in nursery school; there was a farmer who had a dog and B-I-N-G-O was his name–o.

Bingo did have a noble air about him. He had a proud, watchful temperament and a lean, muscular appearance. Pratap loved his deep brown eyes and floppy ears. More than anything, he loved Bingo’s warm greeting and companionship. 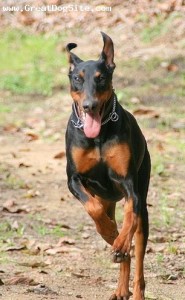 Life with Bingo was exciting; there were long walks in the evening by the lotus pond behind Mr. Pillai’s house, and games of run and fetch or tug of war. On clear evenings, Pratap and Bingo chased waves on Shankumugham beach till sunset. However, not all the excitement had been enjoyable, he admitted to himself. He felt bad that Bingo spent all day cloistered in the flat, while he worked very hard to develop software for a start-up company in Trivandrum. And now, there were these complaints from the neighbors.

Pratap toyed with the idea of leaving Bingo with his grandparents. A small flat in the city was hardly a suitable home for a large Doberman, who needed plenty of air and outdoor exercise.

Pratap sighed as he looked into Bingo’s enquiring eyes, “What shall we do, Bingo? I know. Shall we go to Mutthasha’s house? M-u-t-t-h-a-s-h-a’s house?” he repeated. At the mention of Mutthasha’s house, Bingo panted enthusiastically, his mouth pulling into a wide smile.

“Okay!” said Pratap aloud. The decision was made. It would be nice to take a break at his grandparents’ beautiful ancestral Nalukettu home, near Kochi. They could get away from the small flat and spend a few days in the large inviting house, with its central courtyard and tall teak pillars.

The next day, Pratap loaded his jeep in preparation for the five hour journey to his grandparents’ house. Bingo tore around him in eager anticipation. Bingo enjoyed road trips, especially to Muttasha’s house. He liked to take in the smells in the fresh green paddy fields, eat the delicious scraps of food that the cook threw at him and to take long walks with Pratap, by the deep blue lagoon to Lekha’s house. He also enjoyed the evenings on the cool verandah with Brigadier Menon and his old friends.

It was drizzling slightly as Pratap pulled out of the iron gates of the Paradise Apartments onto the road. Bingo had curled up comfortably on the floor in the back of the jeep. A number of random thoughts crowded Pratap’s mind as he weaved in and out of traffic towards the national highway. Maybe he should take that job offer in Bangalore, far away from Mr. Pillai and others at Paradise Apartments. He wondered if Lekha would like to live there. Those beautiful large expressive eyes….. Maybe he should propose to her soon.

The drizzle became a steady downpour as Pratap and Bingo headed north on the highway.

As they drove amidst the dense forest cover of the backwaters, there was a brilliant streak of lightning followed by a loud clap of thunder. Black skies opened and rain fell in torrents. Bingo woke up, his whines lost in the noise of the rain hammering down on the canvas roof of the jeep.

Pratap brought the jeep almost to a crawl. It was bad enough driving around the potholes, when the visibility was good. Now, it was near impossible. He decided to get to the nearest town and stay overnight. Just then, he heard a loud horn. He swerved left as the road curved, but collided with an oncoming lorry. There was a loud resounding crash and the jeep careened to one side and hit the embankment.

Pratap was thrown out of the jeep. He felt a sharp pain as his head hit the ground. His spectacles flew off his nose and broke into two. Soaked to the skin, he instinctively tried to look for Bingo. “Bingo..Bingo..,” he called, but he could barely hear himself. Pulling himself up with all his might, Pratap walked around the smashed jeep and the shattered glass. There was no sign of his dog.

“B-i-n-g-o,” he called hobbling into a thicket of trees and dense undergrowth. Pratap could not see very far without his glasses. He felt a little dizzy and his body ached. He walked on in the fading light completely miserable and directionless. The fast flowing rivulets of water made the mud slippery and he slid into a ditch feeling a blackness enveloping him.

Many hours later, Pratap forced his eyes open through the throbbing in his skull. He fought a wave of nausea as he tried to sit up. As his eyes began to focus, he took in the familiar bedroom of his ancestral home, his grandfather’s impressive military moustache and his grandmother’s fair, gentle face peering at him with concern. “It is only a concussion and some minor injuries, Pachu,” they assured him in unison. “You were very lucky. We sent a search party out for you. Some villagers found you in a ditch, in the forest below the highway and brought you home. But..” Pratap searched their faces fearfully. “Bingo…he must have run away into the forest. They searched everywhere. They cannot find him in this weather..it is dangerous with leopards and cobras and..,” they trailed off.

It rained continuously for the next three days. Sitting on the steps of the cool verandah, Pratap waited helplessly, as the tall palms swayed in the wind. He feared for Bingo’s life and safety. Although he was sad, withdrawn and lonely, he wasn’t ready to give up searching for Bingo. “I must find him,” he thought.

When the skies finally cleared, Pratap’s mind was made up. Brigadier Menon insisted that he travel back to Trivandrum by train. “It has been four days now,” he said. “My manager says it is futile to look for the dog now.” But Pratap had other plans; he had to try to find Bingo.

As an old white Ambassador taxi car drove up to the front of the traditional Nalukettu house, Pratap’s grandmother lit the many tiered oil lamp and smeared some sacred sandal wood paste on his forehead. “Good luck Pachu,” said Mutthasha, his moustache drooping with worry as Pratap got into the back seat of the taxi car and drove off.

The Ambassador creaked and groaned as they drove down the drenched highway. There were many fallen trees and the road was flooded in parts. Pratap directed the taxi driver to the junction where the verdant paddy fields gave way to the back waters and the dense jungle. The road curved right sharply and there they saw the wrecked jeep.

The red jeep, or what was left of it, lay on its side. The windows were smashed and pieces of glass were strewn everywhere. Pratap got out of the taxi and walked slowly towards the mass of twisted metal.

He gave an unexpected shout.

“Woof,” barked Bingo when the taxi pulled through the iron gates into Paradise Apartments that evening. Mr. Pillai, who was in conversation with his other tenants, speedily assumed his position behind the tall stone pillar.

Bingo barely noticed the neighbors as he chased his young master into their flat.

Yes. They were very lucky.