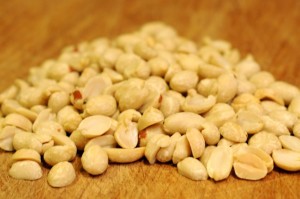 Peels of peanuts lay scattered on his wooden table. The sun trickled in through the open window and little black ants scurried away with what was left of the dry flesh of the fruit that he was having with swig-after-swigs of brandy the last night.

Peanuts. That is all there was for the night. He was hungry, yes, but his pockets were empty. All that he had, to push through the night, was half-pint of brandy that his friend left behind in his room, and peanuts.

It was monsoon. It had rained pitter-patter all through the night. A crash was heard somewhere nearby and the power got cut. The torrential rain kept the authorities safe at home and let the rest of us be drenched in darkness.

His mobile phone ran out of battery and lay dead in his shelf.

With no power, no one to talk to, the long rain, damp night, empty darkness, half a pint of brandy and roasted and salted peanuts, he could not have had another means to spend the night.

He was sad. Not particularly though.

He was sad at the perennial penury that he had been enduring ever since he came to the city a couple of years ago to make a living.

He is a proud engineering drop-out. He smirked at all the MBAs and other management courses that came his way.

“I’m going to study English Literature,” he declared when his kith and kin and even friends asked him what was his next move after he ‘dropped-out’ of the engineering course.

And mind you it was a very dramatic d-r-o-u-p-o-u-t that he staged. He had been through five semesters of the course and his scores kept dropping steadily with each. He never knew how he got into an engineering college. All he knew was that his friends were all on their way to become engineers and he had no particular inclination towards the field. And so once in a theory class on Thermo Dynamics during the sixth semester, his eyes wandered out through the window. His mind was absolutely blank.

Well, his girlfriend would not agree to this observation. She always suspects that his mind is particularly absorbed in something that he doesn’t wish to reveal to her. And so she sat next to him, equally absent to the lecture and keenly observing him, trying to figure out what he might be thinking.

There was an old man, half-naked, oily brown skin and with a colourful loin cloth around his waist and a white towel around his temple, roasting peanuts by the corner of the road. He would roast the raw peanuts in heated sand in a pan over a kerosene stove on his cart. The job is neat: the raw peanuts would go into the frying pan, then into a sieve, the sand will be collected and would be put back in the pan and the crispy nuts would go into an empty can.

And suddenly, out of nowhere, a car came crashing and send the cart flying and the old man sprawling on the pavement.

The noise had everyone in class jump on their feet and hurry to the window. The lecturer used his authority to push a couple of boys back and take a closer stand at the window.

His girlfriend looked flushed and debated with her friends whether the old man was dead or alive.

All, except him, were in a scrabble for information.

“What happened to the old man?”

“What happened to the driver?”

But he was unperturbed by all the commotion. The image of the peanuts thrown up towards the haven and the same raining on the old man was vivid in his mind. He returned to his hostel room and wrote his first poem – ‘Peanuts’.

That was the moment of inspiration and he returned home that weekend and declared: “I’m going to study English Literature.”

His uncle who exported peanuts to Europe and who’s son is a software engineer with an MNC said: “Son, this is suicidal. Go back. Complete your engineering. Get a job. Earn. Get a wife. Get a life.”

He got a little hurt at my remark. But I meant it to be so!

The uncle said: “Others earn alright, but only peanuts. If you want to have a good life, go complete your engineering. Get a job. Get a wife. Get a life.”

“No uncle. I’ve made up my mind. I know what I need to do. I’ll show you what words would earn me.”

“Peanuts son. Peanuts. I’ve seen ones like you before. Just peanuts…”

He stormed out of his uncle’s room for the last time. He resolved to prove him wrong. He spent his next three years learning English Literature. He befriended Keats, Elliot, Becket, Shaw, Shakespeare, Frost and more. They led him through ‘roads not taken’. They became his guiding spirits.

He got a job with an advertising company as a copywriter. It’s the best job he could ever think of. He wrote his first ad-line for a fledgling printing machine manufacturing firm: #&%$# for Peanut-crisp printouts.

He received his first pay-cheque. Nothing much but he was happy. His boss was happy.

He got another girlfriend. They went to beach on Sundays. They chatted for hours together. They munched peanuts.

Then came another. He took her to the beach too. Brought her peanuts and she left him too.

Their parents wanted their daughters to marry engineers who had a job, who had a life and who wanted a wife.

Both the girls vaguely resisted. Said: “He’s good. He has a job. What’s the problem?”

The parents asked: “What does he earn?”

So twice he spent his evening till day-break at the beach, crying, counting waves, stars and munching peanuts.

He was at the beach again just the day before the rains, the power cut and the half-pint brandy…

No. This time it was not a love-lost. It was a job-lost!

He had written another ad-line for the same printing machine manufacturing company with peanut as the theme. Just that he accidentally spelled the ‘pea’ in peanut as ‘pee’.

He pulled a chair close to the open widow, let himself get a little wet in the monsoon sprinkle, sipped on swig-after-swigs of brandy, munched peanuts and hit the bed at some unearthly hour of the night.

He got up, all perked up the next morning; tussled with the black ants for a bit of the roasted, salted peanut. He drained it down with the little of brandy left in the glass tumbler. He knew what he had to do.

He rushed to the public library nearby. He went through newspaper-after-newspapers, carefully scanning the classified sections. There were so many vacancies:

Vacancy in Corporate Communications with IT based company. Competent peanut for eligible candidates.

Work from home. Do you have a flair for writing? Are you good at numerical analysis? Make marketing reports and earn…