As the red glow of the setting sun simmered at the horizon, Reba smeared the last of the soft molded cow dung from the dilapidated and rusty iron bucket on to the wall. Residue of the gooey remains stuck to her little palms; but she did not mind it. It was her source of living after all. Mother would be happy once the dung dried into hard cakes. It would be used to fuel the ‘chulha’ of at least a dozen kitchens in the village. There was a lilt in her child-like steps today. She was carrying home more than just the decrepit dung bucket. Tied around her tiny little waist was a doll; a little rag doll that had seen better days. It was missing an eye, the wooly hair was matted, and the white cloth that formed the skin had now turned into a color that was a mix of grey, black and brown. But Reba did not mind. She was happy. It was her prized possession and she did not want to touch it with dirty hands. So she had tied it to her waist with her blue dupatta.

Her steps broke into a run as she neared her hut. Mother was sitting outside, watching the sun go down. Another day of existence had come to an end for her. She would now light the lamp and wait for Reba’s father and brother to come back from the lime factory. As Reba approached the rickety wooden fence running around the perimeter of the hut, her mother broke into a smile.

“Looks like you have finished the whole bucket. I will sell them tomorrow and buy a vest for your brother. His current one is torn to bits.” Mother said as she got up to go to the kitchen to light the lamp.
“Mother, see what I found today. This is Neelu. She was lying near the wall. She was looking at me with such misery that I took her into my refuge. See, she looks happy now.” Reba untied her rag doll and held it for mother to see.
Mother laughed at her child’s play. “But Reba, your Neelu is in tatters. Her hair is matted and an eye is missing. How will she see properly if we don’t fix it?”
Reba looked at her dear Neelu and was almost in tears. Watching her 7 year old daughter’s long sullen face her mother also made a sad face, feigning concern.
“Don’t worry darling, we will fix her clothes and her eye. Now off you go and wash your feet and hands before you touch Neelu.” Said mother and Reba rushed into the makeshift enclosure made of thatch and bamboo they used as a bathroom.

Mother picked up the tattered doll with affection. She looked at it and regretted her condition – only if the drought had not killed the crops. It was just before Reba’s birth. The birth of her baby girl coincided with the family’s doom. That is why father did not care for her. With her birth there was one more mouth to feed and a greater scarcity for food. But mother had nursed her newborn as best as she could and had taken care of her with all the means she had; which she knew was not enough. But mother had been helpless. Fortunately Reba was a good child. She did not know of enough good things to dream big. She was happy in her little world. Though they did not speak to one another, she reveled in the fact that she had a father to call her own unlike many children in the village who had lost theirs to cancer, tuberculosis, spurious alcohol and acute poverty.
Reba had cleaned up and was sitting on the floor waiting for dinner. Her little tummy growled after a long day of work. But she sat patiently.
Mother had left her doll at one side and had gone inside to get Reba’s dinner of puffed rice and a few pieces if horse gram. When she emerged from the tiny kitchen, Reba was engrossed in conversation with Neelu.

“See your hand and feet are so dirty. You did not even wash your face. I will pull some extra water for you from Saheb babu’s well and wash you. Your clothes are as torn as mine. But I don’t want my little girl to be in tatters. I will stich a new blouse and skirt for you. Maybe Saheb babu’s niece, Lalitha will be able to help me. Now you be a good girl and eat whatever mother gives you. Don’t cry and complain.”
Mother put forth a meager serving and Reba gulped it down with great relish. She had to retire for the evening inside her tiny shack before father came home. Otherwise father would see her wretched face and curse and shout at mother and at the whole world about the misery she had brought upon them.

Reba was not perturbed by this. She was close to her brother, but he was helpless too in front of Father’s wrath. She had come to terms with her ill fate. But she had Mother and now she had Neelu. As soon as she heard her father approaching, she ran inside her shack clutching Neelu to her chest. The last thought in her tired mind was that of Neelu wearing a pretty frock and playing with her.
It was late in the night. Father had again made those disgusting noises, while Mother groaned with suppressed shrieks of pain. And then all was silent again.

But mother could not sleep. In spite of all her sorrows she lived in the hope of her little girl’s happiness. She got up silently and went to Reba. She pulled out Neelu from under her strong grip. No matter how long it took, before the break of dawn Reba would find a transformed Neelu in her arms – mother resolved. She walked out of her home barefoot and went to the common well at the very end of the village. She got water and washed the dirty doll. She came home at the ungodly hours of the night. It seemed as if this mother’s resolve echoed through the universe, and today the moon shone with greater intensity to show her the way in the dead of the night.

She walked inside and brought her wedding saree from the depths of her little bundle resting under the decrepit wooden bed. She was saving it for Reba’s marriage. But it did not matter now. Carefully she tore one long strip from the peacock green border of the saree. The other end of the saree had beautiful embroidery of colorful threads. Mother cut out tiny bits of the saree to cause as little damage as possible. Once she had what she needed, she folded the saree back into its position and started stitching…

The moonlight slowly made way for the first rays of the sun. Mother got busy preparing tea and roti for her husband and son. They had to leave early for work. Little Reba waited for them to finish their meal and leave. Once their footsteps faded away she came out with tears in her eyes.
“Mother I cannot find…” she stopped midway and then the loudest shout of joy escaped her lips.
“Mother see, Neelu has a green blouse and a rainbow color skirt. Oh my god, she looks so pretty. She is so clean. How did this happen? Did you do it?” Reba asked not able to contain her happiness.

“Why on earth would I do it? And where did I even get the time? Reba you have been a good girl and so the Magic Lady with her magic wand has sewn this dress for your Neelu. If you are good, the Magic Lady will always bless you like this. Never give up hope my little one. Whenever you feel sad and depressed, look at Neelu’s rainbow color skirt and ask Magic Lady for a miracle. When you have hope, miracles happen.” Mother said to Reba.
She knew she could never give anything truly wonderful to her child, but she could at least give her a hope to hold on to. That is what will see her though. Watching her little girl happy with her doll of hope, mother slowly closed her tired eyes… 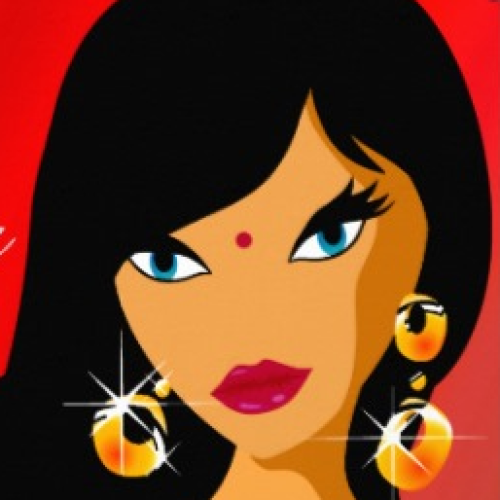