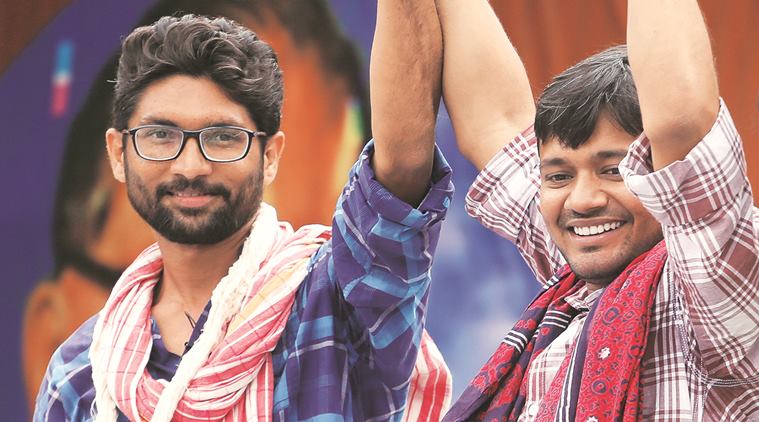 Arrest of Jignesh Mevani, Kanhaiya Kumar and Reshma Patel reminds us the emergency period from 1975 to 1977. The three were arrested on 12th July, the first anniversary of the Una lynchings from Mehsana (Gujarat) as they decided to continue the Azadi Kooch (Mehsana to Dhanera yatra). The Azadi Kooch (freedom march), is called upon by Rashtriya Dalit Adhikar Manch (RDAM) led by dalit leader, Jignesh Mevani. The State Home ministry earlier denied permission for conducting the march as they were ‘concerned’ about law and order issues. But the real reason behind the denial is the fear of BJP about the united political mobilization of marginalised classes at the local level. Unity of the depressed is always scaring to the elite representatives. For BJP, the poor and the discriminated are their political tool and keeping them alike is their requirement to continue in power.

Una is a watermark in the history of India’s people’s movement. It is in July 11th, 2016 seven dalit youth were beaten up by Gau Rakshak activists. They beat them with iron rods and sticks, and tied to a car to march through the town. They were attacked by accusing of slaughtering a cow. But the truth was that they were skinning a dead cow. The youth belonged to dalit community who traditionally earn their livelihood by disposing off carcasses. They collect skin from dead cows. But when Hinduthwa politics started to demonstrate violent campaigns in order to capitalize identity politics, they focused dalits similar to Muslims. Vashram Sarvaiya, one of the victims of Una lynchings, said “Dalits are the new Muslims in Gujarat. The Gau Rakshaks treat us like Muslims”. In the name of cow, Gau Rakshaks became criminals. For them cow is just a mask in order to express their aggressiveness. Several complaints were raised against cow protectors from all corners of the nation, but the Mighty Ruling Apparatus were lenient, as expected, towards such protectors.

But there is a limit for any sufferings. The oppressed anger bursted like a volcano The political equations of Gujarat, particularly in local levels, started to turn against BJP from then. The rise of Jignesh Mevani, the leader of Rashtriya Dalit Adhikar Manch gave a strong foundation for this change. Jignesh called for natural alliance of Dalits and Marxists with his slogan ‘Jai Bheem Lal Salaam’. This encouraged many activists to reconsider their approach on dalit-marxist joint space. Jignesh collaborated with several subaltern movements in India. Association with activists like Kanhaiya Kumar gave impressive evidence for a new kind of politics.

Hence as expected rightwing brigade became defensive. Communal politics have nothing else to offer other than their communal menu. They ‘dined’ beef, ayodhya, bharat mata, anti-national and western culture more lavishly and strongly. They received rewarding tips for that in recent elections too; but simultaneously they became aware of the truth that such gimmicks will not deliver positive results for long. If it has to, the downtrodden should continue to be as such . For that they should not get political education; they should not get mobilized for real issues; they must be wrongly-informed about issues and politics. Subaltern People’s movements in which people get mobilized without any party banner is a threat to right wing politics; hence they will do all possible attempts to sabotage the rise. The irony is that the same party has leaders justifying such cow vigilante. Raja Singh, the MLA from Telangana, was the one publicly supported these criminals and walked free. He was in the news recently for asking people (of a particular religion) to demonstrate Gujarat Model in Baduria of West Bengal.

Police denied permission to hold the anniversary march from 12th July citing law and order issues. But Jignesh and others were determined to go forward. The arrest of Jignesh, Kannaya and Reshma are not incidental but as per the political script of BJP. But they slip the historical fact that no people’s movement had ever defunct for the lack of leaders, it would evolve and strengthen further to achieve their goals.