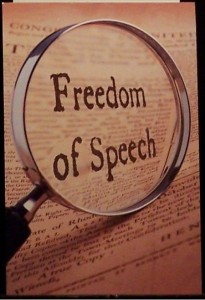 “Freedom is the freedom to say that two plus two makes four. If that is granted, all else follow.” – George Orwell

The rulers of India and majority of the Indian citizens want to boast the richness of Indian culture. But in paradox an area which is under enormous threat today is the very same culture itself. One after another all the forms of culture are made a mockery of- whether it be art, literature or theatre- by the extremist groups in particular and a portion of Indian mass in general. There have been no organized civil movements against this plague on free speech and that shows a dangerous future for Indian democracy and culture.M.F.Hussain and Salman Rushdie who took the rich culture of India to the world stage were denied permission to enter into the same country is a great shame. Tasleema Nazreen of the former India had to face meaner treatments. The message is clear; they (those who are against free expression in cultural forms) want to have a uniform (specially designed) literature or art that adores the powerful according to their whims and fancies. It is high time all writers and thinkers to consider this clarion call and fight against this serious issue because finally the pen must win for the survival of healthy humanity.

Wide open your third eye, else you will be deceived!