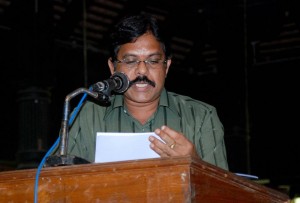 that song makes me ecstatic
those unyielding tones of land
bring me back, palm-fulls
of those moment slided into
the time’s swirling currents
jana gana mana

let me adorn my Nation with that precious crown
let me abulate my people with that nectar
and let me sing aloud that anthem
on the heart of the world
to bring back the lost peace and harmony
jana gana mana…!