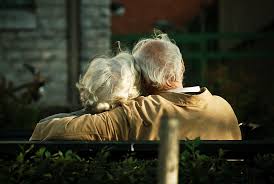 The old man gazed into the still eyes of his beloved

who was lying on her death bed.

He was struck by an epiphany when he realized that years ago on the same date,

their dear ones had showered blessings and  confetti  upon them on their wedding day.

He was overwhelmed with emotion when he realized that

the promise to grow old together had been fulfilled.

He avidly desired to embrace her for the one last time.

But the very next moment, he realized that

she would not be able to feel his touch anymore.

As he starred at his wife’s old white wrinkled face,

he fell in love with her once again.

He planted a kiss on her forehead and dropped a tear,

and  accompany her beyond the sphere.