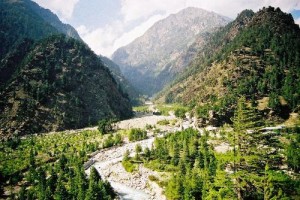 Hiking along some of the Himalayan trails has been one of the things I have truly enjoyed. That was several decades ago during my adolescent days. During recent years I had the opportunity to take up hiking trails along the Hudson Valley in the state of New York. That brought alive my earlier hiking memories and set me on several other trails. One of the trails along Hudson is the famous Appalachian Trail whose northern end is close to Walden where David Thoreau experimented with ‘home cosmography’:

Direct your eye right inward, and you’ll find a thousand regions in your mind yet undiscovered. Travel them, and be expert in home-cosmography.

While rulers, sailors and conquistadors have been exploring and conquering the world out there, the philosophical mind explored elsewhere. Explorations and conquests within should finally mark the culmination of cultural evolution of man. While hiking along the Himalayas and the Hudson valleys I could not resist the temptation to link the two hiking trails.  I often go back in time by a few thousand years traversing a trail from Hindu Kush in the Western Himalayas to the Indus Valley and further eastward and southward. Historians have described the region of Indus Valley, followed by other regions of the subcontinent that witnessed emergence of a unique culture. It acquired sufficient maturity to delve deeper into the fundamental existential queries, including those pertaining to states of mind. Their explorations in ‘home cosmography’ brought forth an ethos where conquests outside were not always the main concern. A flourishing economy and relative stability ushered in an era of understanding and awareness of the human condition which poured out in the form of poetic expressions. These poetic outpourings, related to deepest of queries pertaining to life and mind were at times exquisite and elegant. Just look at couple of lines from Ishopanishad:

The Lord is the supreme Reality.

Rejoice in him through renunciation,

The verse is essentially about a ‘state of mind that rejoices in renunciation’. The layers deep inside the psyche keep drifting creating different regions almost like geological formations that created the Himalayas and the Hudson highlands. The continental drift due to tectonic movement formed the structures of present day Hudson highlands and the Himalayas. What about the drifting ‘continents’ within our own unconscious and subconscious. I have only a very crude idea of this.  That kind of exploratory voyage was to some extent visible in different contexts and different time frames.

Mind corresponds to different states of being, but there comes a state when the separate individual identity disappears. That state of being, which is the common denominator of all minds, has been of growing concern to men of vision in all ages. The thoughtful mind tries to communicate knowing well that the picture may be incomplete. How could one interpret otherwise the words from Brihadaranyak Upanishad:

You are what your deep, driving desire is,

As your desire is, so is your will,

As your will is, so is your deed,

As your deed is, so is your destiny.

The pertinent next question is: what is after all our deep, driving desire. For individuals the answer may differ, and it should. However, talking of the state of being when separate identity disappears there does appear something of a common denominator, unanalysable, unexplainable – yet very much present. I am trying to find a trail leading to that. I know that it would not be easy, if possible at all. To achieve this I will have to pass through several difficult terrains and marshy lands taking different trails.

The deep driving desire for many of us has some areas of overlap. These can be identified in terms of symbols such as democratic working, an honest concern for human dignity and  rights, mutual respect, acceptance of diversity, a liberal outlook, and to live in harmony with nature. We must find a way and the necessary will to continue on our onward march to unravel the mysteries of nature without destroying it. That, said in a different way, is: we do need an Ecological Perspective.

Is that possible at all ? I started with a hiking trail in the Hudson and Himalayan valleys with all their grandeur and richness. Hiking has a two-fold connotation — conservation and exploration. Every moment we can explore seeking proximity with nature and in the process we tend to be closer to ourselves than usually we are in our hectic everyday living. One may as well take a trail inwards fathoming the depth of being. Hiking along the trails out there as also inwards should go simultaneously. I am walking simultaneously along both the trails in space as also in time trying to find answers to some of the deepest of queries regarding the human condition. Is this merely a wishful thinking, a figment of my imagination? With the history of conquests, cruelties, genocides and exploitation in not too distant a past, with the fundamentalism taking new multiple shapes in present day world, and with a mad rush for acquiring a luxurious living by all possible means am I seeking the impossible ? May be it is so, or perhaps there is hope. The same people who practiced slavery in its crudest form fought a civil war abolishing the curse of humanity. Like drifting continents there may possibly appear drift in human psychology. More than two thousand years ago Emperor Ashoka put a permanent halt to his campaign of conquests and became instrumental in spreading Buddha’s message. In the present world polarized by religious intolerance, economic manipulation, rampant corruption and political maneuver there are individuals and groups which, in spite of their shortcomings, have guts to stand up to the challenges transcending the boundaries of nations, religions and cultures. I am focusing on that trail. The tectonic movements under the earth’s surface has lead to creation of mighty Himalayas. The movements underneath psychic layers can see the emergence of new summits. We have to look out for them.

My mind is wandering again around the northern end of the Appalachian Trail re-entering the area in Concord where Thoreau spent a brief but fruitful time of his life, transcending geographical, cultural and temporal domains of existence taking the routes to freedom through renunciation. It was a freedom as envisaged by philosophers and men of vision in all cultures. The freedom from mental constructs, from captivity of patterns, from prejudices took him to the East again. In his own words:

“Thus it appears that the sweltering inhabitants of Charleston and New Orleans, of Madras and Bombay and Calcutta, drink at my well. In the morning I bath my intellect in  the stupendous and cosmogonal philosophy of BhagwatGita……………………….”

Gandhi and several others have written their own commentaries of Gita. I have gone through Gandhi’s commentary and liked it. The real battle as depicted in the epic might or might not have been fought historically. That part was not relevant. The important point that emerged was a realization that the battle was and is constantly being fought within all of us, that the characters of the epic are nothing but various facets and inclinations of our own psyche. Each of us is a superposition of many-in-one in different proportions and the characters of the epic represent all shades.

That kind of battle each of us has to fight everyday every moment. The need of taking care of our own physical existence is part of our autonomous existence. In moments of deep thought we do look into the transpersonal domain and try to transcend our own narrow interests.

“ The pure water of the Walden is mingled with the sacred water of Ganges. With favouring winds it is wafted past the site of the fabulous islands of Atlantis and the Hesperides, makes the periplus of Hanno, and, floating by Ternate and Tidore and the mouth of the Persian gulf, melts in the tropical isles of the Indian seas, and is landed in ports of which Alexander only heard the names.”  (Thoreau)

The hermit of Walden could fight and survive the battle within, and so did the sage of Kathiawar who was motivated and inspired by Thoreau. Most of us keep fighting all our lives continuing the indecisive battles. And some of us are losing the transpersonal domains of our psyche yielding entirely to the autonomous needs of the self. Most of the time we appear to be losing our lives in living. In spite of such existential problems we must allow the continuous mixing of waters of Walden and Ganga and Kavery, and connect the trails in the Hudson and the Himalayas, and temporal chain linking Buddha, Thoreau and Gandhi.  This linkage has a symbolic context too. Much of the present day world is shaped in the West finding its peak in the developments along the region of the AppalachianTrail. Much of the ancient wisdom has flourished in the region of the Himalayas and the subcontinent. The two traditions – the ancient and the modern, that define the two trends of human mind — are to be brought together to define the future trajectory for the mankind.

That ecological perspective and the deep driving desire to live in harmony with nature does finally lead to an understanding of the ecology of mind as well.