A lone man, Ikbir Kaur, hesitantly walks along the dusty pavement aided by a mystical tinge of twilight. The jingling coins in his trousers’ side pocket seem no less than a foreboding.  Intense and substantial. The ripe wheat fields stretch on the adjacent sides. Each footstep Ikbir makes, takes him further away from his home where a lifetime of pain and anguish seem to await him. He cannot carry them further – at least not at this moment. But he knows that he would have to go back sooner or later. The worn-out slippers hit back the soles of his feet at every step, which persistently reminds him of the stretch he has covered away from his home.

Two days ago, he had pawned his wife’s jewellery for his father’s long overdue treatment. Now there is no need. He had lost his father in the afternoon today. Leaving him with the unused money. A few coins and a wad of notes tied with a rubber band.

The long solitary walk takes him to a dhaba along the highway. His feet covered in dust and his face with disgrace. Every man in his family and a few from the vicinity must have gone to his father’s funeral. They will take care of things. And he’s here now. In front of the dhaba. Today, he wants to live his life. Ambiguous and clumsy future glances at him from the horizon.

Ikbir sits on a charpoy put outside the dhaba and orders butter chicken and naans. He feels the firmness of the money in his pocket. There are no customers – only the hotel owner and his employees. To distract his thoughts from the happenings in his house today, he decides to look around: trucks and cars zipping on the highway, cooks and waiters preparing his kingly dish, the hotel owner counting cash again and again in disbelief.

‘Make it spicier, with extra butter.’ He yells at the cook.

Later he is served with much reverence. One after the other, the cook places various dishes before him. The food gives out a rich aroma of money. With a tinge of remorse. The charpoy wobbles and shrieks even in his slightest movement. Today he will disregard everything and indulge himself to the fullest. Such times may never come again. God is not watching him and he could sin and get away with it. He reflects.

It was a quotidian day until the afternoon when Ikbir came home from his ripe wheat field. His skin kneaded with sweat and dust. Drawing water from a well in front of his modest kutcha house, he cleaned himself and later sat down to have the meal. Oblivious of what was approaching.

Even before he had put the first morsel of food in his mouth, his mother came running and broke the news. His father who had been sleeping under the neem tree outside the house was not responding. She constantly shook his body and even called him out many times, but with little hope. Her face was already wet with tears.

He put back the food in his hand back on the plate and said, ‘I’ll go and see.’

Ikbir knew. Later, his father’s body was laid on a deathbed and shrouded. Adorned with flowers. The veranda was full of villagers and relatives consoling each other. For many, it was just one more death, and for others their near-destiny in waiting. Ikbir had two elder brothers who were handling all the rituals and proceedings of the funeral, which indeed was a great respite for Ikbir.

Since Ikbir saw his father’s dead body, he went into a swoon and lost his touch with realism. He sat hunched in a corner of the veranda. He did not shed any tears and wasn’t obliged to do any of the rituals as a son. He could sense the money in his pocket; it had lost its purpose. His stomach twisted and sank. He had taken only water since he woke up early in the morning and the sun was now about to set. Everyone else would take care of his father, he thought and in a daze, he broke himself away from the crowd. Ikbir began to stroll. Away from the order of his muddled life.

If things had gone as usual that day, Ikbir would have taken his father to Bikaner the next day on a train that many had started calling ‘The Cancer Train’. Many cancer patients from the neighbouring villages waited on the platform of Batinda station every day to board the train to Bikaner; where a hospital provided affordable treatment. Ikbir had always insisted to go with his father. A servile son. A ruthless life. The train journey with his father made Ikbir feel as if he was taking him to a pilgrimage. To liberate his father from suffering.

‘I don’t want to live. Lying all day on the bed and doing nothing.’ He had heard his father say earlier in the morning when he was setting out for the field. Now that his father was dead, both were in a sense liberated from their sufferings.

Ikbir eats the butter chicken, relishing every bite. He feels a tinge of guilt in the food. However, he manages to sniff it out. Oddly, everyone in the dhaba seems to be looking at him as if he is  committing a sin. An unforgivable crime. He salivates profusely like a dog. When he is done, he pays the hotel owner from the wad of cash in his pocket. Eyebrows raised. ‘Do these people know me?’ He thinks. ‘How does it matter though?’

‘Keep the change.’ He says aloud like some rich NRIs of his village.

The weight of the money in his pocket appears to have decreased a little, while the guilt in his heart heaved many times over. Questions and self-doubt kept exploding in his head. His father’s body may have been cremated by now.

He walks back towards home under the delusion that contemptuous eyes are observing him. He has no place to conceal himself. The eyes are everywhere. After he has travelled a little distance and was about to take a turn towards his village through the narrow path, he spots a small beer shop on the other side of the highway. Emboldened by his first escapade, he goes to the shop and drinks to his heart’s content. He did not bother what the world around him would say, the world must keep its shame to itself, Ikbir introspects.

He crosses the highway again and enters the muddy narrow path between the wheat crops. The sun is not visible, but the sky is still illuminated with a soiled yellow hue. With his drunken eyes, he sees chimneys in the horizon billowing smoke. ‘Bastards. Demons.’ He yells and looks around whether anyone took notice of him. The whiff of pesticides that had been sprayed on the crops was choking him now even though he himself sprayed the same in his field that morning. ‘What they call it? Yes, a necessary evil.’ He mutters. Almost every next household in his village had a cancer patient. Awaiting death. So that their sons can live their lives, until they meet the same fate.

The day grows dark, quiet and gloomy. The coins keep jingling blatantly at every step. He hears a motorcycle approaching him from behind. He moves aside to let it pass. Trying hard to steady his body. To appear prudent and worldly. The motorcycle passes by, raising dust in the air and apprehension in his mind. It stops a few feet in front of him and he sees two men get off and come closer to him. Before Ikbir can compose himself, the two burly men are upon him, punching him mercilessly. Perhaps now they know. Ikbir is a sinner and he has no right on the money. They search his pockets and seize all his riches. Then he is chucked like a sack of grain in the muddy brook between the field and the path. Then they are gone, whistling triumphantly. Just like his good sense. Just like his father. Silence and darkness remain. Moonless night.

He tries to get up from the brook with much exertion but gives up after two disastrous attempts. He finally decides to rest in the cool soothing mud. His nose and crotch hurt badly. But not as relentlessly as his heart and mind. It is better, he feels, to lie here in peace than getting back home. He falls asleep – subdued, intoxicated and dreaming. 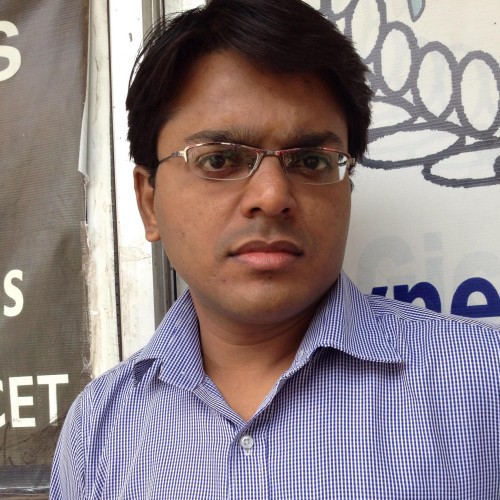 Dinesh Maurya
Dinesh J Maurya is a writer based in Surat, Gujarat. He is the author of the novel ‘The Belongings of the Body’ and has also published a novella titled ‘Mama Martyr, Papa Peace’.