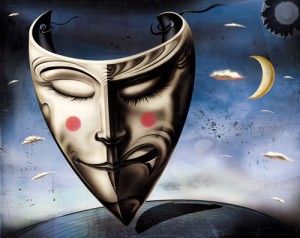 Perhaps you have had the ill fortune of being acquainted with Barbara Winthrope. If not then I strongly suggest that you consider yourself extremely lucky and in future avoid it at all possible costs.

Barbara Winthrope was extraordinarily shy. The concept of socializing or even small talk was completely alien to her. She had no friends but probably possessed the biggest band of fans and followers ever. In her mind she would hold impassioned discussions but in real life she could barely handle conversation and was often tongue-tied. Ever conscious and nervous, Barbara loathed any attention that she got, which quite frankly was impossible for her to avoid since she was the most sensational actress in the British film industry.

Not that you could overlook her had she not been an actress. She possessed a slender figure and a face that engraved itself on your mind the moment you laid eyes on her. With a five eleven height, marvelously soft and wavy burgundy hair, deep grey eyes with a hint of green in them and the most perfectly carved nose you ever saw, she created quite an impression, though I can hardly say it was long-lasting.

On screen she went by the pseudonym Alexandra Wakefield, and just like her name, her entire personality underwent transformation while acting. She was completely in control of the situation and possessed uncanny confidence. Often she would improvise, making the scene better than the director could’ve imagined, and even when she didn’t, purely by the virtue of her acting, she made the scene much more impactful. She was loved by the audience and theatre critics alike. While acting, she was comfortable, she felt like she was the most celebrated, the best, the one, the only.

There was something incomprehensible about Barbara though, even after receiving such widespread acclaim, she only did negative, villainous roles. That is where my calamitous fortune stepped in. I worked for Long Aisle Productions and my task was to convince Barbara to sign a contract for a movie which required her to portray a courageous lady of substance. Long Aisle Productions was the biggest money minting machine in the industry, Alexandra’s market demand was record breaking, and thus I had to invite her for lunch.

Even as I asked the maitre d’ for Barbara, I could see her hiding in a secluded corner booth with a hideous blonde wig, and oversized, geeky spectacles. Somehow she even managed to physically change off screen, by looking shorter, spiritless and quite plain. It was as if Barbara and Alexandra were two completely different people.

I prepared myself for a long, monotonous afternoon and walked to the table. After what seemed like an incessant silence, I decided to break the humdrum by asking her, “So how do you like the pot roast? The beef is so inordinately succulent, I personally think it’s the best I have ever had.” She took forever to answer. This was the same with any question anyone ever asked her, as if an infinite probability drive was running in her mind, judging the possible outcomes of every response she could offer. Except for questions related to acting, though I can hardly say they evoked any quicker a response. In case of the latter, her eyes winkled and twinkled with joy and she was transported into her own utopia. Thus such questions were extremely hazardous since they reduced her to a merely physically present entity for the rest of the day.

When it became obvious that she couldn’t even manage a polite response I decided to do away with the causerie and directly jumped to the question, which received a prompt reply (an unusual phenomenon) of outright refusal. When I tried to persuade her, she indicated that this meeting was over. I paid the bill and walked her to a taxi (she never used a car thinking it would draw attention). In a final attempt I asked her, “It doesn’t make any sense, why don’t you want to do it?” but she was already gone.

“Tell me what you dream of becoming” Barbara’s first grade teacher asked the class. Lucas, with his finger vigorously picking his nose replied, “I want to be very rich.” While Amy screamed, “I want to be a rock star.” Little Matt, hitting imaginary punches in the air said, “I want to be a boxer” while Barbara excitedly blurted out, “I want to be a hero, like superman, and batman, and wonder woman.” After class Barbara dragged her best friend Amy to the main street. “Come on! I want to practice my skills” Barbara said. “When the school bus is just about to come, step in front of it so that I can fly in and save you.” “No, I won’t do it” Amy retorted. “Not even if I give you a Hershey’s chocolate bar?” Amy’s eyes lit up, “yesss!”

The school bus came into sight. The driver was sure he would be fired this time. He had developed a heavy drinking problem and was perpetually late. Drunk and late once again, he was driving outrageously fast when he saw a tiny figure step in. a series of thoughts swept in his mind in quick succession, ‘Who is this?’ ‘Is she crazy?’ ‘What is she doing in the middle of the road?’ ‘I must be imagining things’ ‘Oh my God, she really is there!’ His foot hit the break and his eyes squeezed shut.

When Amy stepped in front of the bus, Barbara thought, ‘This is it! It’s my moment. I’ll call myself super duper girl’ She was rejoicing that in seconds she would be a hero, but the incident was already over in nano seconds. The bus came speeding, the colour flew from Amy’s face, the tires screeched and Amy’s scream pierced Barbara’s ears, then everything was a blur. When things came back into focus, all Barbara could see was a thick crimson liquid everywhere, it was all over her clothes and on her face, a small drop even trickled into her mouth, it was kind of salty. Her mind began processing all that it had just witnessed and as the reality of the situation dawned upon her, she was overtaken by nausea and puked over and over again. Then everything went black. Barbara woke up in her bedroom, completely drenched in sweat. She was reliving the nightmare yet again.