Each day Radhika tried the plum skin under Bharathi’s neck. The fresh skin, underexposed and unscathed like the underbelly of amphibian body, tingled under her touch. She could sense the tensile strength just before the neck crack -the crack reverberating like mustard seeds under low heat. She would picture it cracking, the last cry of life, a dead fish-eye, a body lifeless. She had vivid dreams of Bharathi’s body -rigid, a body from which the life has left. Dreams left her pitiful, and remorse enclosed her body. She grew wary of her dreams and kept a heedful watch to draw out even a single stream of consciousness. But no watchfulness could tame her wild dreams. They grew vibrant and macabre as Radhika grew hysteric around Bharathi.
Bharathi, her son Shiva and his wife Radhika lived in Bharathi’s marred house. The house leaked and blend into its surroundings day and night and corroded a little with each monsoon. Doors cracked of danger and sensile tunes of loneliness echoed the loudest within the house.
As the house sung hymns of the past, Bharathi’s world shrunk with each passing day. One day, she couldn’t find her keys in her usual place. Another day, she lost her coins that she cautiously tucked away in her lungi. The world mocked her of hypochondria. Eventually, she could no longer remember to drape a saree around her body before leaving her room. She circled around her house, naked, dreaming of butterflies and monsoons. She smiled at strangers guilelessly and complained of her husband being late ( who was long dead and gone by then). Even though she ate plenty, she grew emaciated, and her eyes bulged out of their sockets.
Bharathi did not live like this since forever.

Aana Bharathi breathed in grandeur in her younger days. She participated in countless Ezhunnallath right beside the elephant, thus giving her the name of Aana Bharathi. People in Kannur still reminisce about how Bharathi outshone the gold-clad elephant. Her plumb body was a vision of beauty, and men, mad in love, chased her. Singers serenaded her with thousand songs of longingness and loss. She would throw sly glances at her admirers and masterfully coax elders into doing her bidings.
But these days, Bharathi reeked of loneliness.
Radhika woke up to a pungent smell of feces today. She knew where to look for the source of the acrid smell. She walked into Bharathi’s room. Bharathi has forgotten how to hold her feces and has discharged jets of shit all over the room. She has knelt down and started swallowing her own feces. Radhika found her covered in her own excretion and had to resist the temptation to nauseate. She swallowed her pride and got on with the cleaning.
Radhika toiled with the idea of asking Shiva for assistance, but she knew better. Bharathi’s only child Shiva mastered the art of avoidance from his early age itself. Shiva was a dreamer of exquisite taste. He could get consumed with ideas of freedom and a better house and be lost in reveries of the longing for a finer life. But he always fell short in helping Radhika take care of Bharathi.
Radhika was lost in her own thoughts when a knock at the door brought her back. She opened the door to the locality’s gossipmonger standing. The scheming bunch scavenged the houses around looking for deviants and misfortunes. Radhika exchanged niceties in the hope that the thirst of the bunch would quench.
“How are things between you and your husband?”
A supercut of despondency played in Radhika’s head. Lines in her forehead creased deeper.
She nodded in agreement.
“What about making a new house?”
“Oh chechi, that might take a long time to make. The property is in amma’s name. She wouldn’t allow us to have the old one torn down till she dies. At least that’s what she said when she could remember things. “
“Ayyo, that is sad.”
The universe had bound three souls in a never-ending abyss. They kept drowning deeper into the conundrum that is life.
“Do you have enough money to build a house?”
“We will scrape by.”
“What of Bharathi?”
“We are managing.”
“Pavan penn. She had to do everything.”
“Ohh maami. That’s ok”
“You are paavam.. you could have married anyone. Unfortunately, you ended up with these people. Didn’t you get to have a love marriage?”
Radhika nodded again.
“What is Bharathi doing?”
“She is asleep.”
“Is Bharathi doing things on her own?”
“Nowadays, someone has to help her with everything.
“Ayyoda”
“I have to get up early and clean up her bed. She tends to wet her bed nowadays. “
“What a bad fortune you have!”
“She also sometimes gets her leg stuck on the toilet. It takes two of us to take her out.”
“Mol has a good heart.”
“Chechi, she sometimes eats eight or nine times, and no food is left for us. Those days, I need to cook meals again and again. I get no sleep at night, wondering what mess I would have to clean up the next morning.”
“These people are lucky that they have you. Don’t lose hope, dear.”
“Some days, she eats whatever she finds. We had to clear up all the stuff from her room. Days are tough…..”
Right then, Bharathi burst out of her room, stark naked. She has escaped out of her sari that Radhika put her into. Radhika could sense the air in the bedroom charging against her. The gossiping bunch stood ecstatic of having found the next prey. They offered make-belief condolences and left the house in dreams of scheming a defamatory paradise.
Despondency covered Radhika in the cocoon of shame. She could no longer live the life that she was destined to take. She commanded Shiva to take her to her house and stay the day there. Shiva, like a dutiful husband, took out his scooter and prepared for the journey.
Radhika knew she wouldn’t return till evening. So she kept a plate of cooked rice and spinach for Bharathi and left the house.
After the couple was long gone, Bharathi came out of the house, holding the plate of rice. A gaunt dog, lifeless and piteous, roamed into the veranda. Bharathi disposed off the contents of the plate in front of the dog. The dog waged his tail and began eating away.
Two cadaverous souls lost to the enclosure of the world, found love again.


Haritha T Chandran is a Doctoral student at TU Dortmund. 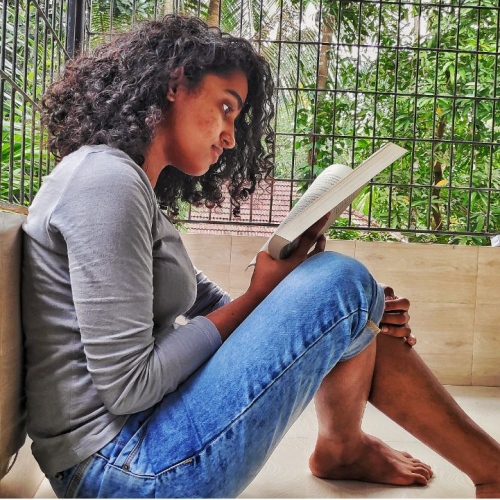