The attack of a Cobra – Rajani Priya.S 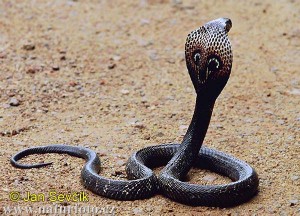 The whole village was in an eerie silence when the house of Sameera also followed the rhythm of sleep. Sameera’s father, who was tired of the hectic day, was feeling uneasy. The family always slept on the floormats. As usual the mother slept in the center and her brother in the corner of the room. When everything they thought was still there was something moving up brushing her father’s hand. He felt a cold ‘thing’ in his hand but was too tired to get up. Then a minute later, again something moved across, this time the ‘thing’ was surely slimy and fast. Sameera’s father had guessed what it was. He just gave a call to Sameera to switch on the light. She got up and switched on the light only to witness that appalling sight. Her father who had got up by that time was speechless to see a very big cobra with its hood spread. It watched them. Its eyes glistened in the only light in the room. Sameera’s mother and the brother were fast asleep. Sameera managed to wake up her mother. Her mother wondered what the father and daughter were doing at that time of the night disturbing her sleep too. The hissing cobra turned towards her suddenly. They were all standing still frozen with fear, worried about the boy sleeping at the corner. The boy was wearing only a ‘lungi’ in the summer night. They tried their best to awaken him. Sweat trickled down their spine.The cobra was there right before them, real and threatening. The father called the boy’s name once again aloud which finally had some effect on him. Alerted by the movement of the boy the cobra immediately focused on him. This was even more terrible for the parents were standing helplessly watching the whole scene. It was as though they were all in a trance but the cobra was now keen on the boy. He was absolutely clueless as to why his father called him. The boy did not know the least that there was a cobra near him. This time the cobra was sure to strike as it was eagerly waiting for the boy to make a move. Just as he got up with his eyelids half closed the cobra with all its vengeance struck him like a lightning and wriggled into the nearby room.

The villagers were at their door steps cursing the cobra. Few sturdy men were searching the room for the vicious cobra. The whole family was stunned by the sudden turn of incidents. They were unable to utter a word also to the questioning neighbours. All was once again still. It was dawn at last. Things came to better light. The search party finally got hold of the tail end of the cobra and they killed it first with all their might. The villagers praised the father, for it was his virtues that had saved the boy. The cobra struck the boy when he got up to sit and it stung him between the thighs right on his ‘lungi’. The boy couldn’t believe anything that had happened. It took him the whole night to realize what had really happened at his home. They all considered it a great miracle. Sameera’s father and his undeniable faith and belief in god had saved the life of his son.