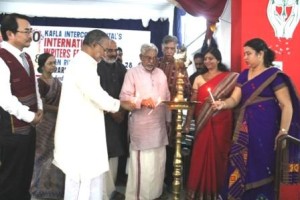 Kafla Intercontinental’s 10th International Writer’s Festival and Indian Ruminations Literary Festival has been conducted during 27th and 28th December at Kerala Gandhi Smarak Nidhi, Kerala. The festival was organized jointly by India-Inter-Continental Cultural Association, Indian Ruminations, Kerala Gandhi Smarak Nidhi and Shruti – the School of Music. The focal theme of the festival was ‘Vasudhaiva Kutumbakam’ with special focus on World Peace and Literature.  About 150 writers from in and abroad participated in the festival.  The festival sessions was conducted in two halls –  Hridyakumari Nagar & Ayyappa Panikkar Nagar.