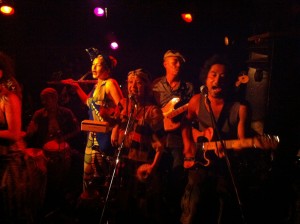 The concerto reached its climax with the orchestra playing full throttle and the drummer repeatedly striking the drums. At the peak of the symphony suddenly the instruments stopped playing and with a final bang on the cymbal the drummer produced a sound which echoed in the auditorium as if a massive glass house was broken in to pieces. The momentary deafening silence accompanied by total blackout in the hall which followed this volcanic sonata was quickly interrupted by flashes of revolving lights and a thunderous “bolo..tara ..rara…” by Sukhi. A conditioned response from the audience vibrated back with , “bolo.. tara..rara…”

Sukhi’s excitement was at its peak. He had performed live on stage on several occasions, but this one was really a mega event. One of the biggest auditoriums in the country was jam packed with people. The whole atmosphere was filled with excitement and a huge crowd of young hysteric boys and girls was already on the stage swarming over him. “Bolo.. tara ..rara..” was a chorus now with Sukhi’s voice drowned in it and his whole body caressed, kissed and licked by the crowd. His face and chest looked like a collage of different shades of lipsticks and the atmosphere thundered with “Sukhi… Sukhi…we love you Sukhi….”. He had fulfilled his dream. He was a pop-star now.

Sukhi was at the top of the world but he could not understand why at this moment of triumph and fulfilment he had a strange feeling of incompleteness, something missing, a vacuum, as if he was forgetting something which was more compelling and haunting than the ecstasy of success he was experiencing at that time. For once he looked up towards the roof of the auditorium. He didn’t see anything there but kept staring. His mind started visualizing something different, flashes of lights seemed to lose their beauty, looked more like gunfire from the anti- air craft guns and the noise created by tanks and machine gun firing replaced the sound of music.

It was one of the scorching hot afternoons in a small village near Hoshiarpur in the Punjab. Sukhbir Singh was smitten by the magic of what his professor had said to him.“Genius ! Goddess Saraswati has blessed you with an extra ordinary voice. Sukhi, you must get formal training in music”.

“Kaka ! if you want to learn music, go to Raagi Kartar Singh. He will teach you good music and you will get a chance to learn Gurbani as well” Sukhbir’s father staunchly opposed his wild thought of pursuing music as his career.

“But Papaji I want to learn vocal as well as modern musical instruments like guitar, drums…..” Sukhbir knew it pretty well that he was good at singing and dancing.

“ Silly boy, do you want to learn music or become a ‘bhand’)?” Banta was furious to know what his sons intended to do in his life.

“ I want to be a singer, perform on stage and be a famous man” Sukhbir was ambitious to be somebody like Gurdas Mann, Diler Mehndi or Michael Jackson.

“ My son a singer? No Kake, never. You can’t be a ‘bhand’ . You are my son, you belong to a family of soldiers. You have to join Army as a commissioned officer.” Banta Singh was not ready to compromise. As the first Junior Commissioned Officer, Banta Singh had achieved the highest military rank in the family. Sukhbir was about to complete his graduation and Banta had all his hopes pined on him as the first from his clan to join Indian Army as a commissioned officer.

“Over my dead body…” Banta Singh put the seal on his decision.

Captain Sukhbir Singh was unable to move his bleeding limbs. It was hardly a few moments ago he was successfully leading the mission and his team to capture the target. They were in the Drass Sector of Kargil just below Tiger Hill, and a large contingent of enemy’s soldiers was guarding their bunker barely 100 meters from where Sukhbir and other soldiers were climbing up. Their goal was not too far from them but while they were moving forwards in the stillness of darkness, one of them accidentally displaced a stone down the hill. The falling stone produced a sound which got magnified with an echo from everywhere. The sound provoked heavy firing from the top of the Tiger Hill. Sukhbir sustained multiple bullet injuries in both his legs. He dragged himself up and looked behind him. Fauja, who was also seriously injured, was there, looking at him for further instructions.

There was a brief interruption in firing from the enemy’s side followed by deadly silence in the darkness. Sukhbir had no doubt in his mind that the enemy had spotted his team and they were very much in the firing range. But he was conscious that the diffuse echo had distracted the enemy to some extent and the enemy wasn’t too sure about their exact location. They were very close to the enemy’s bunker but just another sound would mean an end to the mission, that was for sure. Sukhbir looked at Fauja who slowly crawled to overtake him.

“ Sahab, you are seriously injured. Let me execute the plan. It is the last chance for us.” Fauja gradually moved past him. Sukhbir was not too sure what Fauja was trying to say.

Sukhbir noticed something in the darkness. Fauja struggled to look up to Sukhbir and whispered “ Sahab Ji, I have some hand grenades in my pockets. Let me do it ”. Before Sukhbir could respond Fauja lifted his body like a log of wood and threw himself forwards to leap in to the enemy’s bunker in front of him.

It did not take long for Sukhbir to understood what Fauja was going to do. He wanted to stop him and say, “ No Fauja no, let me do it. I am commanding you Fauja. I will do it.” But before Sukhbir could say anything to him, Fauja disappeared in the darkness. Sukhbir tried to pull his body and follow Fauja, but he was unable to move. His right leg was riddled with bullets. He tried to pull himself with the support of his elbows but couldn’t move even an inch.

A few moments later the quiet and dead rocks of Tiger Hill echoed “Jo Bole So Nihaal.. ” and the next moment Sukhbir saw a figure standing up and throwing himself into the enemy’s bunker. There was a thunderous sound in the bunker followed by deadly silence. Sukhbir’s eyes became heavy but he could feel his own soldiers advancing past him to capture enemy’s bunker.

While staring at the roof Sukhbir suddenly felt deaf with his ears, his mind groggy and his excitement dampening. His charity show in the memory of “Shaheed Fauja Singh” was a great success but he felt low within. Like the images in a kaleidoscope Sukhbir recollected the sequence of events following Kargil war, the battle of Tiger Hill, Fauja’s widow receiving posthumous gallantry award for her husband, his own formal discharge from Indian Army and then his own training in music, his success as a famous pop-star. All these images and many more pictures overlapped with each other making a collage of familiar faces, but his heart sank like a child lost in a mela.

Pop-star Sukhi again looked up in the sky he imagined through the roof of the auditorium. He could see Fauja’s toad like eyes peeping from the clouds. For the first time in his life Sukhbir felt that his father was right. His dream of becoming a top pop singer was a reality now but he was not happy. He realized that a popular entertainer can not match a soldier. There was no doubt in his mind. Fauja stood taller than him. He strongly felt that he missed a chance, a life time opportunity to succeed. He was overpowered by a thought of a near miss, something he didn’t want to lose. He looked up in the clouds and screamed “ Fauja, I am your officer. I command you to stay back. Give me this chance. I am going to dismantle enemy’s bunker. Let me go first”.

Sukhi did not realize it when he actually threw away the hand mike and jumped in the air as if throwing himself on to the enemy’s bunker. His Jaipur foot, which helped him all these years to perform flawless dancing on the stage, got disengaged and suddenly he felt excruciating ‘phantom pain’ in his amputated stump.

For Sukhbir it was even more painful to hear a whisper from somebody in the audience “ Who was this Fauja Singh…?”